Published on 2 Luglio 2021 by Comicart.tips

Welcome to #196 of Original Comic Art Tips! I received a note from the email software I use informing me that last week 70 emails were undelivered, I don’t know what happened but if you’re one of those 70 readers here’s a link to that issue. And if you find it in the spam, please flag it as “not spam” to avoid it happening again.

Seems like Scout pages by Tim Truman have many fans, after the latest sales, a page went for $1,2k.

Self published pages by Steve Ditko continue their growth, after being initially snobbed. this one went for more than $1k.

Best Offers: a certified Snoopy sketch by Schultz was sold for less than $2,9k, a Star Wars cover by Duncan Fegredo for $3,2k.

Heritage Weekly Auction: the latest Sgt. Fury page by Dick Ayers won with $5,5k, a Spider-Man card painted by Gary Ciccarelli for $3,3k, the Fantastic Four page by Art Adams for $3,1k, Valiant original art is hot, this Quantum and Woody DPS by Mark Bright was sold for $2k, corpses in Dick Tracy strips have the same effect as sexy girls in superhero pages, this daily went for $1,6k. This Infinity Abyss page by Jim Starlin was a good deal at less than $1k, $800 is still a lot for a Batman head sketch by Bruce Timm, but less than the latest sales. A good deal for flippers is also this David Finch commission sold for $300.

Catawiki: a Murena cover by Delaby went for €9,5k, highest price for the Hermann covers was €9k for this one, the cover by Swolfs for €6,1k, one of the Dany covers made €1,4k.

In April we were talking about the $130k record for Barry Smith, now the beautiful cover to Conan #2 doubled that price at $264k, at the same time an unpublished Weapon-X cover was also sold for $102k.

A 5-page story by R. Crumb was sold for $312k, the origin of Sabrina by Dan De Carlo for $114k, the Sandman title page by Dringenberg made $31k (look for another one on eBay!), really surprised by the Overstreet Guide cover by Schomburg sold for $50k and the $41k for the Fathom HC cover by Michael Turner (a Superman cover made a 2nd place with $19k).

This is only the first page of results, but it’s already getting too long….

The Superman Wedding cover by John Byrne for $22k, the Captain America cover by Mike Zeck for $19k, all of the Rube Goldberg strips went for high prices, this one for $11k, $3,4k is a high price for non-Marvel Bob Powell art.

A page without Daredevil by John Romita Jr. went for $2,3k.

Heritage Animation Auction: the Peanuts daily went for $102k, 3rd highest price paid on HA for a daily, the Schroeder sketch for $5,5k, the Wolverine trading card art by the Hildebrandt Bros was sold for $26k, the Spider-Man for $19k, I was not the only one doubting the attribution to Alex Toth of the Space Ghost drawing, it went for $600 while S.G. originals by Toth usually sell for $2k to $5k.

Septimus: a Lucky Luke illustration by Morris went for €21k, a Tuniques Bleues cover by Lambil for €16k, a Thorgal cover sketch by Rosinski for €12k, a Ric Hochet cover for €10k, a Scorpion page by Marini for €7,5k.

Millon: an illustration by Bilal went for €112k. After a big jump down, the second place was “only” €18k for a Franquin and Morris jam illustration, a cover by Tardi and a Spirou illustration by Franquin €13k, a Ric Hochet cover €12,5k, a detailed sketch by Uderzo for €8k. 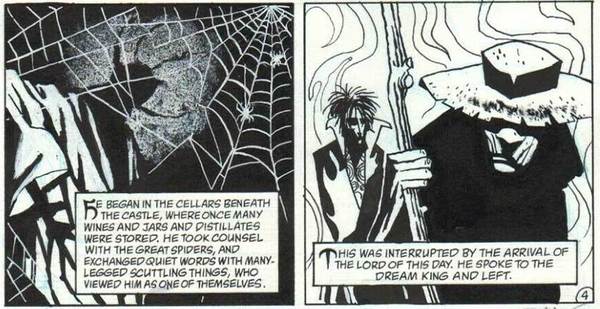 DC: the top piece of the week is the title page from Sandman #64 by Teddy Kristiansen. Great art in this full 8 page Green Arrow story by Phil Hester, here’s one. Wonder Woman by Heck, Legion by Mortimer, a Shazam title page by Don Newton and a really good Batman page.

Marvel: a Star Wars page by Carmine Infantino is ending today, a Thor page by Frenz/Sinnott, a great Morbius Vs. Werewolf page by Redondo, White Tiger by Giffen.

Next-Men by Byrne, Grendel by Wagner, a Star Wars page by Jim Baikie.

A Hellboy pinup by Gabriele Dell’Otto, a small illustration by Moebius, a Spawn page by Marc Silvestri, a Marv sketch by Frank Miller.

A very nice Namor page by John Byrne, the Shadow by Sienkiewicz, a great Swamp Thing splash by Enrique Breccia, a Hate page by Peter Bagge, a Andy Capp strip by Reg Smythe.

I’ve already seen this Batman sketch by Jim Lee for sale, it’s a nice drawing, I’d keep it. A vintage Spidey page by Mark Bagley, a Captain America commission by John Byrne, Superman by Gary Frank, a rare Y the Last Man page, I like this Batman page by Guillem March.

There are several NFT‘s by Jae Lee, all going for very high prices, here’s the cover.