Published on 26 Aprile 2019 by Comicart.tips

Here we are with #82 of Original Comic Art Tips, with a very long eBay section, part 2 of the Heritage Signature Auction and another ComicLink auction!

Edit: if you came here searching for Jim Lee Original Comic Art there are a series of articles on the website about prices for his 60 charity illustrations.

eBay: the Marvels page by Alex Ross went for $4,200, the Swamp Thing by Steve Bissette for $2,000, a Defenders page by Giffen for $1,300. $6,400 wasn’t enough to reach the reserve price on the Hulk pinup by Jim Starlin, while the early Coyote splash by Todd McFarlane still made $850.

The Daredevil page by Romita Jr. was finally sold with a BIN of $2,400, this Sin City splash by Frank Miller was sold for an undisclosed offer. I don’t know why, but I became aware of this Kingdom Come page by Alex Ross only after it was sold for $3,500…

Happy collectors bought a Green Lantern page by Darryl Banks for $120, a nice Scott Kolins Flash page for $200, an Earth-X page by J.P. Leon for $170 and Logan original art by Leinil Yu for $300.

Heritage Sunday: the Nightcrawler page by Ross Andru went for $3,800, the Spider-Man page by Ed Hannigan for $1,400, the Excalibur by Alan Davis for $1,900, the Avengers page by George Perez for $1,500 both the Ron Wilson Thing splash and the Buscema Conan page were sold for $1,300.

Happy collectors bought the Dracula page by Gene Colan for $500 and the Conan by Gil Kane for $300.

Russ Cochran: yesterday was the day of the monthly comic art auction, a Jack Davis Tales From the Crypt cover was sold for $40k.

We need to start with Marvel Comics again this week, I have to show you the cover art to Incredible Hulk #232 by Dan Adkins, it’s already at $9k with two days to go.

3 Speedball pages by his co-creator Steve Ditko, prices are pretty low at this moment (one, two, three). A Spectacular Spider-Man page by Sal Buscema, they’re getting rare to find. Hulk by Buscema/Stone and Hulk Vs. Thor by Buscema/Mesina, A nice Fantastic Four page by Kupperberg/Giacoia, Iron-Man by Trimpe, Claw by Ernie Chan, Cap Vs. Modok by Paul Neary and a J.J.J. page from Amazing Spider-Man #117 by John Romita.

Detailed DC Universe page by George Perez, JSA by Rags Morales and one of those Batman action figures with original comic art by Jim Lee, an Harley Quinn sketch.

A page from Superman/Spider-Man by Ross Andru is the big piece of the week, there’s also a Green Goblin page. Spider-Man again, look at this Venom half splash by Tom Lyle, Spidey and Black Cat by Jim Mooney, Spidey Vs. Joe Fixit original art by Jeff Purves.

An Excalibur page by Alan Davis, Avengers by George Perez, a very nice Conan page by John Buscema and an unfinished Punisher splash, a Conan page credited to Stefano Raffaele but probably drawn by Claudio Castellini.

DC: Batman and Zatanna by Jim Aparo, Classic Batman original art and a Batgirl page by Kevin Maguire, Azrael by Joe Quesada, a Flash DPS by Paul Ryan and a Wonder Woman page by Jill Thompson.

A beautiful 50’s magazine illustration by Alex Toth, a Warfront splash by Lee Elias, a Scalped page and the usual Neat Stuff page by Peter Bagge. 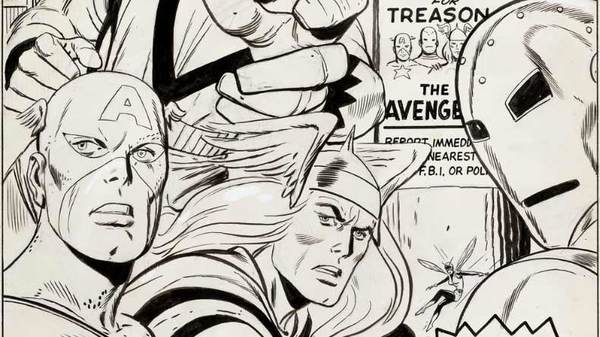 Here we are with part 2, you can read the first in last week’s newsletter.

Marvel: a Dale Keown Incredible Hulk cover, a Spider-Man/Mysterio splash by Erik Larsen and a Spider-Man/Hulk page. A Daredevil fight page by Frank Miller, a page from X-Men #100 and a Dr.Doom Vs. Red Skull cover by Dave Cockrum, the title splash to Avengers #13 by Don Heck.

a Doctor Strange splash by Frank Brunner, a Dracula title splash by Gene Colan and a Spiderwoman cover by David Finch.

Many pieces by Frank Frazetta, including this painting that will set another record, a Cerebus page from #25 and some strips: great Popeye daily by Segar, a 1921 Gasoline Alley daily with the full cast and some early Krazy Kat Sunday pages.

It’s time again for the monthly ComicLink Comic Art auction, these are the highlights, go look for the hundreds of nice pieces that will go for very low prices..!

This Batgirl origin page by JH Williams is already at $4k, so I have to start from here. There’s also a painted Batwoman DPS and a Promethea DPS.

If you like Batman art there are also a full figure pinup and a bust by David Finch and a a nice DPS by Tony Daniel. Tony has dozens of pages in this auction, there’s also a Wonder Woman cover.

A Marvel Zombies DPS by Sean Phillips, a Spider-Man page by Alex Saviuk a Spidey pinup by Sienkiewicz and a Spidey bust by Ryan Ottley.

A Soul Saga DPS by Stephen Platt and we’re done.