Published on 21 Febbraio 2019 by Comicart.tips

Welcome to this week’s Original Comic Art Tips Newsletter, here we are with our Auction results:

The Venom cover by Steven Butler went for $4,500, the Wolverine/Hulk original art by Sam Kieth for $1,400, the Godzilla page by Herb Trimpe for $2,800, the Cap and Iron-Man paintings by Adi Granov sold very quickly for $850. 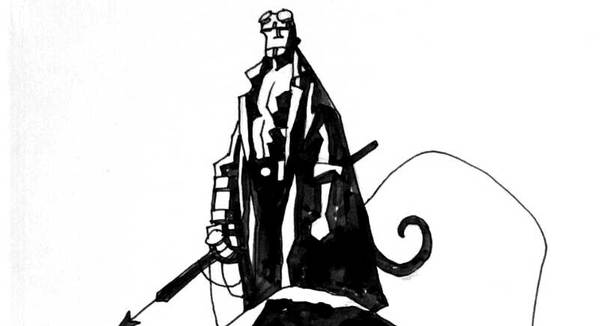 We can start with the two most watched items of the week, a published Hellboy illustration by Mike Mignola and a page from Sandman #5 by Sam Kieth (well, the most watched is, as usual, a Jim Lee sketch cover but the other two are more interesting…).

Marvel: How much would you pay for a pair of Hulk hands drawn by Todd McFarlane? Very nice Pat Olliffe cover from Spider Girl #57, a Captain Marvel page by Ron Lim, once in a while nice Jorge Zaffino original art comes to an auction.

Good News! Finally, after almost 2 months of disappointing Sunday Comic Art Auctions, we have a really strong list of pieces, I even had to edit out quite a bit of lots. I’ll start with Marvel and the title splash to Sub-Mariner #72 by Dan Adkins, I like this original page from Fantastic Four #154 by Bob Brown, a Gene Colan Half-splash from Daredevil #32, a Don Heck page from X-Men #45, beautiful Mooney/Sinnott art from Ms. Marvel #4 and a Hulk page by Herb Trimpe.

The return of the Buscemas: John with original art from Thor #178 and an action Conan page, Sal with 2 Thor pages, one from Thor #240 and the Loki title splash from Thor #375.

I wasn’t a Dave Hoover fan in the 90’s, now, with nostalgia mode on, I really like this What If? title splash and this Captain America cover. Very nice Butch Guice original art from a Swimsuit pinup book, Purves/Austin Spider-Man Vs. Joe Fixit page, Wolverine commission by Rob Liefeld and a Cyclops splash by Leinil Yu.

Warlord half-splash by Mike Grell, beautiful Books of Magic splash by Kelley Jones, an EC page by Jack Davis, a Ghita illustration by Frank Thorne and a Scott Pilgrim page.

This section is already too long, I’ll leave out the usual, returning strips and only highlight this Joe Palooka 1932 Sunday and this Katzenjammer Kids Sunday by Doc Winner.

A Largo Winch page with Largo in all panels, a nice Olivier Rameau page by Dany and not much else.

2 very rare original art pieces by Alessandro Barbucci, a page from Echo and a Skydoll pinup, a Tanguy et Laverdure page by Uderzo and another early Largo Winch page.