Catawiki Auctions: Frank Quitely came to a convention in Rome in 2019 and gave a free sketch to everybody who asked, I saw them selling for €600 since. This Superman (unpersonalized) went for more than €1k. A Rip Kirby strip by Alex Raymond went for €1,3k, the Elektra sketch by Sienkiewicz for €600, a nice Batman page by Tom Mandrake for only €350.

Heritage European Auction: many very high prices in this auction, the winner was Charles Burns with the cover to Raw #4 sold for more than $80k. Not an expert on Burns’ prices, I know that they’re high, and this was a historic piece.

An incredible record for this Tank Girl cover by Jamie Hewlett sold for almost $70k, which triples the price of the last cover sold on HA just six months ago.

$40k for this Tintin illustration is low compared to the usual prices for Hergé original art, an unrepeatable opportunity for somebody not rich enough to pay a million for original art. I already reported how the quick Tintin sketches are growing: €800 one year ago, €1,2/1,5k in the last months, and now this one sold for $2,2k (€1,9k).

The Silver Surfer page by Moebius went for $37k, all of the pieces by Giraud were sold for high prices, like this early Blueberry page sold for the same $37k. Gold medal high jump for Don Rosa, with this Uncle Scrooge page sold for $27k. Everybody already commented on this Sin City page by Miller sold for $16k, almost double what was expected.

The Peanuts daily at Nate Sanders’ was sold for $49k.

Marvel: a Spider-Man page by Tim Sale, Dr. Strange by Gene Colan, a Frankenstein half splash and a Howard the Duck page by Val Mayerik, a great Dr. Doom page and a Two In One by Herb Trimpe, White Tiger by Giffen.

An EC prelim by Frank Frazetta, a Jack Kirby Romance cover, an uncredited Bob Powell page from an early issue of The Fly.

A Brandy pinup by Frank Cho, Love & Rockets by Jaime, a sketch by Moebius, a Cerebus page by Dave Sim.

A big Illustration and a sketch by Milo Manara, a model sheet by Magnus, Ken Parker by Milazzo, Air Mail by Micheluzzi.

A Star Wars cover by Duncan Fegredo, a good 100 Bullets page by Risso, a Scalped page and a cover by Guera, a Space Punisher cover by Mark Texeira, a Sgt. Fury page by J.P. Leon.

Best Wishes to your money from Jack Kirby

Hard to choose what to leave out, when all of the pages look great..! 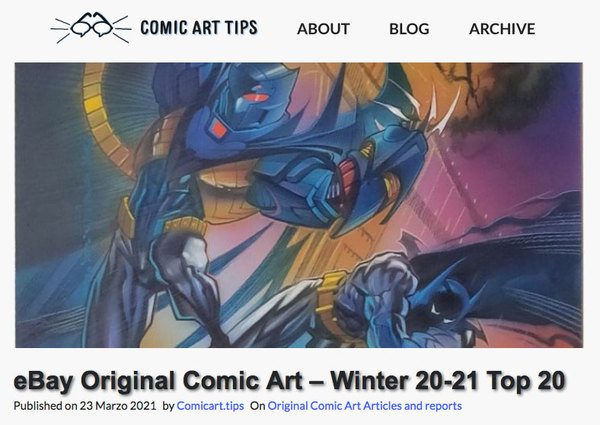 Here’s a new blog post on the ComicArt.Tips website, a top 10 of the highest auction end prices in Winter 2021 – followed by a top 10 of charity auctions!