Published on 4 Settembre 2020 by Comicart.tips

Mike’s wife announced last Sunday that they raised $257k with their auctions in the last months.

A plain Hellboy bust was sold (by another seller) for $1,5k.

A Spawn sketch by Todd McFarlane was sold for $2,5k, a Batman prelim by Bernie Wrightson for the same price, a Doomsday Clock page by Gary Frank for $1,8k, the Wolverine page by Adam Kubert for $1,6k.

An X-Men cover by Skottie Young was sold for $1,2k, the Red Monika sketch by Joe Mad for the same price, a Guardians of the Galaxy painting by Esad Ribic for $1k.

High results for comic strips: a Terry daily by Milton Caniff went for $3k, a Bloom County Sunday for $4k, a Wash Tubbs daily by Roy Crane for $2,5k, a Steve Canyon Sunday for $1,6k.

Heritage Weekly Auction: a Dick Tracy daily wins with $4k, a Ben Casey daily by Neal Adams was sold for $2,6k, the Thanos page by Jim Starlin went for $1,1k, the Howard the Duck page by Gene Colan for $1k.

ComicLink: big results for a great auction. The highest price paid (and a very high price for Comiclink’s standard) was for the Spider-Man page by Todd McFarlane, sold for $58k, another jump up for interior original Spidey art by Todd. A Detective Comics cover by Neal Adams, sold for $42k, which is lower than comparable original art sold on Heritage, but CL has no buyer’s premium, $8k saved.

An Iron-Man cover by George Tuska went for $32k, a Thor cover by John Romita for $24k (relatively low for a JR cover), for the same price went the cover to Daredevil #80 by Gil Kane, then the Marv pinup by Frank Miller and the painted Hellboy cover, sold for $20k.

$19k for the Joker cover by Brian Bolland, $18k for the Avengers cover by John Buscema, $15k for the first Deathlok appearance by Rich Buckler.

Let’s see some bargains, like this Buscema/Sienkiewicz Wolverine page sold for $850, a great Spidey page by Simone Bianchi sold for $500, an Avengers cover by Adi Granov for less than $2k, a nice Jubilee page by Marc Silvestri for $800.

Always amazed at the secondary market prices for Tony Daniel original art: a nice Batman page went for $400 and a cover quality commission for $900.

Am I the only one that’d rather pay $7k for an action X-Men page by Jim Lee than $20k for an unpublished pinup?

$16k for a complete Captain America issue by Mike Zeck means $750 for a page, not bad.

Comiconnect: remember the incredible selection of X-Men original art by John Byrne? they ALL went unsold. There were some good deals, like this Wonder Woman cover by George Perez sold for $1,6k, a Hulk page by Herb Trimpe for $1,7k, a Mister Miracle page by Jack Kirby sold for $1,8k, a signed Wonder Woman page by Don Heck for $350 and a Young Justice cover by Todd Nauck for less than $600. 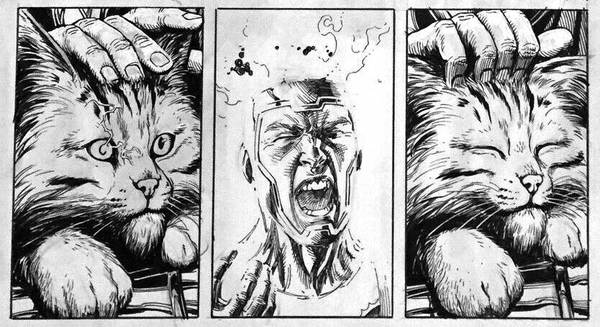 Mike Mignola is selling: Were the Wild Things Are, Monsters Inc., Beany and Cecil and Kukla and Ollie original art, somebody is selling a 2003 Hellboy bust.

Marvel: nice Master of Kung-Fu pages, one by George Perez and one by Mike Zeck, Spider-Man original art by Ross Andru, I like this Conan page by John Buscema and this Hercules by Bob Layton.

Dazzler by John Romita Jr., Conan by Wendi Pini, a Beta Ray Bill prelim by Walt Simonson (and many other from the same seller), a splash by John Byrne.

Nice Grendel half splash by Matt Wagner and a Valiant cover by Paul Gulacy.

A Preacher page, early Love & Rockets original art by Jaime, a Hellboy bust by Mike Mignola, THB by Paul Pope, a Mickey Mouse cover by Dick Moores and one by Paul Murry.

Here’s part 2 of 3, last week we looked into covers and next week we’ll look at interior art just in time for the auction.

HA is auctioning the collection of Alex Raymond‘s family, there are two great Flash Gordon Sunday strips and several beautiful Rip Kirby dailies, here’s the 3rd ever strip, but all of them are worth a look.

the usual big lot of Garfield originals, here’s a 1979 Sunday, a perfect Tarzan Sunday by Hal Foster, a Krazy Kat Sunday, a Far Side panel, Terry and the Pirates Sunday strips are getting rare.

I really like this Felix Sunday by Otto Messmer and this Dick Tracy Sunday.

Look at this Sky Masters Sunday by Kirby and Wood.

A Moebius sketch, one by Yves Chaland and one by Alessandro Barbucci.

An Andy Capp and a Johnny Hazard strip.