Published on 10 Luglio 2020 by Comicart.tips

Mike Mignola’s weird vegetables all sold for $1,200-1,500, Turnip was the higher. In the meantime four other auctions started and ended, remember those Hellboy pencil busts sold at conventions for a few $100’s until last year? Hear this: one sold for $3,6k, two for $3k, three for $2,4k and four for $2k. These were the entry point prices for published Hellboy pages…

Somebody bought a complete DKIII 9 volume set with 9 Frank Miller Batman sketches for $4,2k… That’s a nice collectible, if you want to burn four thousand dollars.

Cornette De Saint Cyr: many of the lots went unsold or for less than the estimated prices, the highest price was paid for the Delacroix homage painting by Milo Manara, sold for €26k, the Thor cover went for €9,1k.

All of the Punisher covers by Tim Bradstreet were sold, this one for €3,9k, the others for very affordable prices, like the painted one that went for €1,4k.

The Walking Dead splash by Charlie Adlard went for €1,5k, a Zombie fight page for €1,3k. A Judge Dredd painted page by Frank Quitely went for €850, the Tom Strong cover by Art Adams for €3,6k.

Jim Lee is selling #52, a nice depiction of The Question and a great Batman/Catwoman illustration by Joelle Jones.

Mike Mignola is auctioning very nice pinups of Marvel villains, Electro, Rhino, Super Skrull, The Scorpion and an Hellboy bust that looks like a relisted one from last week.

Another charity piece is this Batman/Question illustration by Denys Cowan.

DC: speaking of Jim Lee we have a new all-Harley page from Hush, another Harley sketch + action figure here, The Comedian by Gary Frank, a JLA page by Scott Kolins, The Demon by Gene Colan, a Batman page by Jim Aparo.

Marvel: Nice Conan page by John Buscema and a Fantastic Four Vs. Doom page by Ed McGuinness. Nothing else.

Thinking of this week’s prices for Hellboy busts by Mike Mignola, seems like $1k is not bad anymore…

An early Love & Rockets page by Jaime, a Preacher page by Steve Dillon and a Tarzan commission by Neal Adams.

Some very nice pieces, this week, probably to use the peak of traffic due to the Signature Auction.

A Stardust page by Charles Vess, an Incal page by Zoran Janjetov.

The first lots ended yesterday come back next week for a full recap.

Now let’s see lots closing today and on the weekend: X-Men original art by Dave Cockrum, a Dracula cover by Gil Kane, a beautiful Elektra splash by John Romita Jr., a Fantastic Four title splash by John Byrne, a Batman half splash by Lee Bermejo, I like this Batman DPS by Tony Daniel. 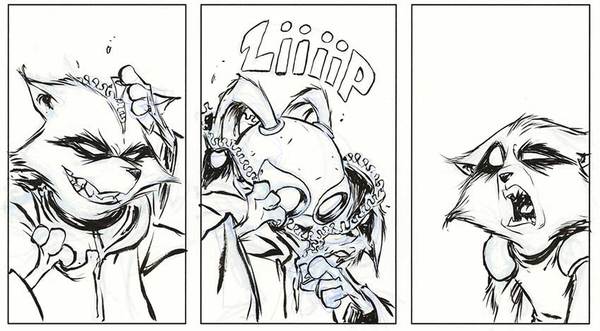 Many covers, pages and sketches by Skottie Young, here’s an X-Men splash, and here’s all the rest.

Many pages by Leinil Yu, like this complete Superman issue with its cover.