Published on 12 Giugno 2020 by Comicart.tips

Welcome to #141 of Original Comic Art Tips! several new auctions, many results and some surprises on ebay. Sorry for being late, this week, working from home takes me a lot of time.

Jim Lee paused his daily sketches, he wrote this on social media: “Obviously, I have held up my fundraising activity for comic shops during this pandemic. That will resume when appropriate.” while at the same time announcing that he’s selling one of his X-Men pages on Twitter, again for charity (it ends tonight BTW).

Non Charity: Remember the Jim Lee Batman/Robin commission that stayed unsold and overpriced on ebay for at least a year? The new prices finally helped the sale, and it was sold for $17k. A year ago that price sounded insane.

A Psylocke sketch that was put for sale lately, after the first charity auctions, went for a Best Offer of $16,5k.

I really can’t believe this one, seems like an incredible Hulk/Ghost Rider pinup by Gil Kane was sold for $2,1k, at first I thought it was an overpriced stat, but the whiteout marks and faded signature make me think it’s real.

A lucky week. Somebody was browsing ebay at the right time, two early Shadowhawk pages by Jim Valentino were quickly sold for a $400 buy it now, an half splash from #1 and a full splash from #2, their real value is (at least) $1,800-2,000.

The nice Deadman page by Garcia Lopez for less than $800 was a great catch, the Wolverine cover by Mike Perkins went for $500, a Captain America splash by Dan Jurgens for $450, the Doug Wildey page for less than $300, a Green Arrow page by Jim Aparo for $75.

Urania Aste: the Sam Pezzo Illustration by Giardino was sold for €6k, the Alex Ross illustration was sold after the auction with a base price of €7,5k, the Ticonderoga title page by Hugo Pratt for €3,7k, the two Tex strips by Magnus went for €2k each.

The Carl Barks Donald sketch was sold for $1,7. Not the best Barks piece, but a finished drawing for that price is almost impossible to find.

A detailed Topolino cover prelim by Cavazzano went for €200, a finished cover for €425. Good deals.

Hero Initiative is selling some pieces drawn on their small, branded paper. Here’s a nice Superman by Kevin Nowlan.

Marvel: everybody is watching (and bidding on) this Thor pinup by Walt Simonson, it already surpassed the $2k asked lately for a set of 10 commissions, but they will be without background, this one is a full illustration.

A color Goblin Queen pinup by Bruce Timm, the price is pretty good.

The Dracula page by Gene Colan is still going and still below its market price, a Werewolf page by Ron Wilson, Spidey by Alex Saviuk and Tom Grindberg, a small but published Firestar pinup by Art Adams.

A nice Wolverine commission by Mark Texeira, Black Cat and Spider-Gwen by Greg Land, a Storm sketch by Jim Cheung.

A Steve Ditko page from his self published comics and a signed 1965 letter.

An Hellboy cover by Mike Mignola, a Sin City page by Frank Miller, a nice Invincible cover by Ryan Ottley. 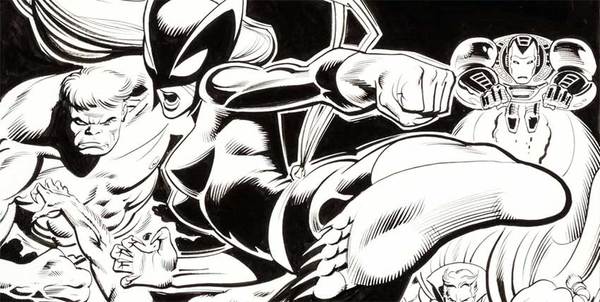 Great Batman family illustration by Mike Deodato, Superman pages by Murphy Anderson, the usual dozen by Swan/Anderson, a Superman cover by Ethan VanSciver and a Demon pinup by Bruce Timm.

A Namor splash and a complete What The? story by Marie Severin, an early Dazzler page by John Romita Jr.

A Wolverine commission by George Perez, a Spidey/Namor splash by Tom Lyle, look at this Hellcat-Avengers cover by Norm Breyfogle.

A Ruse cover by Butch Guice, an Aliens painting by Simon Bisley, a rare Popeye cover by George Wildman.

A great auction, most of the bigger names in European comic art are represented, both in published original art and signed sketches.

Let’s start with published pieces: a Murena page by Delaby, a Vaillant cover by Graton.

Several Manara pieces, like a nice half splash from Le Singe and a full figure woman drawing with a low estimation.

An Incal page by Moebius, XIII by Vance, Ric Hochet by Tibet, a Titeuf pinup by Zep.

Seems like even quick sketches by Uderzo have grown, lately.

Then Bilal, a rare Freddy Lombard sketch by Chaland, Schuiten, a detailed Murena by Delaby, a really quick, but beautiful sketch by Hugo Pratt, a rare Castafiore by Hergé, many Gaston sketches by Franquin, this one is my favorite.

Not much to see besides this beautiful Disney Sunday strip adapting the Christmas Carol cartoon.

Two Dick Tracy specialty sketches (one, two) by Chester Gould, the second one looks like it may be from the ‘30s.