Published on 14 Febbraio 2020 by Comicart.tips

What happened with this Batman page by John Romita Jr. sold for only $490? I had to bid on it….

Heritage Weekly Auction – mixed results for Alan Davis original art: an Excalibur page went for $1,100, another one with less action but some nice panels for only $660.

We all know that Spider-Man pages by Erik Larsen are growing constantly in price, but I was a little surprised that this nice, but spiderless page went for $3,000.

Some pieces all sold for $2,640: a Mighty Crusaders cover by Dick Ayers, the Batman trading card by Simon Bisley, the Action Comics cover by Bill Sienkiewicz and Uncanny X-Men original art by Marc Silvestri.

A 2-page Archie story by Harry Lucey went for $1,400, the Avengers cover by Sal Buscema for $1,200, which is a good price, even for a recreation. Keep an eye on Web of Spidey pages by Alex Saviuk, they’re going up. Last time I checked Bernie Wrightson convention sketches were selling for $600.

Big week for Marvel Comics on eBay: we start with a very nice Avengers cover by Ed McGuinnes ending tomorrow with a low starting price. A beautiful X-men page by Andy Kubert and Bill Sienkiewicz, a Cap Vs. Thing page by Sal Buscema, an Avengers pinup by Bob Layton, Namor by Marc Silvestri. I don’t remember the name of the villain in this page by John Byrne.

Who said Rob Liefeld? Here’s another X-Force page ending today, a very nice MCP page with The Beast and a modern Cannonball page.

Just a few, but nice, pieces from DC, like this Batman page by Gary Frank, Batman Year 100 original art by Paul Pope, another Batman page by John Romita Jr, a Green Lantern page by Seth Fisher, Supergirl by Carmine Infantino, Teen Titans by Eduardo Barreto and a Shade page by Chris Bachalo. 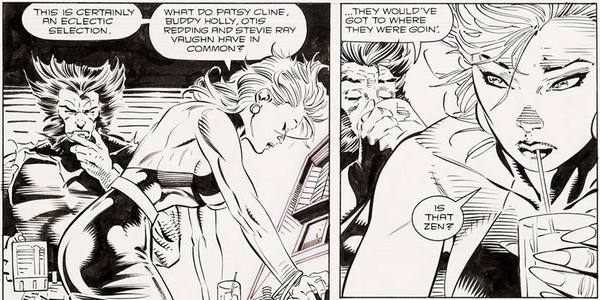 Andy Kubert – Wolverine having a beer

A Superman splash by Kurt Shaffenberger, Wonder Woman by Don Heck, Cap Marvel by Don Newton, Jim Aparo is back with a beautiful Deadman page, Tarzan by Garcia Lopez and an Hot Wheels page by Alex Toth.

A Batwoman splash by Andy McDonald and a Batgirl splash by Lee Garbett.

Marvel: get ready for the ‘90s! A Deadpool page by Ian Churchill, X-Factor original art by Joe Quesada, finally a pretty good X-Men page by Joe Madureira, Wolverine art by Andy Kubert, Incredible Hulk original art by Dale Keown, an Excalibur splash by Alan Davis, a detailed cover prelim by Art Adams, a She-Hulk page by John Byrne and even a Guardians splash by Jim Valentino.

Then a Hulk page by Herb Trimpe, an UK Cap Marvel splash by Jim Craig, a great painted cover by Mark Texeira and an Earth-X pencil illustration by Alex Ross.

Not much for Strips besides the usual weekly lots and this incredible Polly and Her Pals Sunday. I also like a lot this Jeanie Sunday by Gill Fox, a funny Hagar daily and a 1987 Garfield daily.

Next Week’s Little Nemo Auction will be for horror/fantasy themed pieces: movie posters, rare books and original art (they called it “visionary artists”).

The main piece is this Ken Kelly calendar cover, A painting by Lucio Parrillo, two Marvel Team-Up pages by Ross Andru with Spidey and the Werewolf, the starting price is good for two pieces.

A nice Swamp Thing splash by Enrique Breccia with a low starting price, two Batman pages by Alberto Ponticelli, I like this Dylan Dog page by Corrado Roi and this Lobo bust by Simon Bisley.

Heritage’s next big auction is in three weeks and there are 671 lots in the Original Comic Art section, I better start…

Covers special! Let’s do something different, here’s the best in cover art for this auction. The big piece is the cover to Amazing Spider-Man #51 by John Romita, Doc Strange by Frank Brunner, The Avengers by Sal Buscema, Iron-Man by Gene Colan, the Hulk by Jim Starlin and Star Wars by Carmine Infantino.

A painted New Mutants cover by Bill Sienkiewicz, an original Spidey cover by Erik Larsen (curious to see the end price on this one), a perfect Marvel Age cover by John Byrne, an Excalibur Wraparound by Joe Mad, Sabretooth by Frank Teran, Two in One by Nick Bradshaw, Avengers by Olivier Coipel, Inhumans by Adam Hughes.

DC has many classics too: A great Phantom Stranger cover by Jim Aparo, several Flash covers by Nick Cardy, a classic Batman by Dick Giordano, Superpowers by Jack Kirby, Curt Swan and Neal Adams on Superman, and I really like this Romance cover by Jay Scott Pike.

A weird Batman cover by Jim Lee, a Books of Magic tryptic by Mike Kaluta.

An original Hellboy cover by Mike Mignola, great Judge Dredd by Steve Dillon, I like a lot this Johnny Craig EC cover and this Piracy by Reed Crandall, Dejah Thoris by J. Scott Campbell and Love & Rockets by Jaime.

I finally found the time to write a new blog post for the comicart.tips website. I’m almost two months late for the end of Autumn, but we’re speaking about expired auctions, so it makes no big difference…