Published on 9 Agosto 2019 by Comicart.tips

Welcome to Original Comic Art Tips! For the second week in a row we only have eBay and Heritage auctions to look at (the first new auctions will be in the beginning of September), but we have a nice eBay section and some interesting Signature auction results!

Heritage Sunday: the beautiful MAD illustration by Jack Davis went for $21k (!), the Excalibur page by Alan Davis for $2k, the Hercules cover by Garcia Lopez for $1,900, a Buster Brown painting by Outcault for $3,100, the gothic illustration by Bernie Wrightson and the Shang-Chi splash by Gene Day both for $1,300.

Happy collectors won 2 Sgt. Rock pages by Estrada/Kubert for $900, an Estrada/Delbo Wonder Woman for $550 and a Batman page by Russ Heath for $300.

Heritage Signature: Sal Buscema made some big results, a Defenders cover went for $102,000 and a Captain America cover for $96,000. Don Heck is another artist that made a big jump in valutation, with an Avengers splash sold for $96,000 (probably also due to the fact that this is an exceptionally attractive page). A complete EC story by Williamson/Frazetta was sold for $90,000, the Marvel poster by Kerry Gammill went for $31k, the X-Men #100 cover by Arthur Adams went for $21k, the Spider-Man #151 cover prelim by Gil Kane for $5k, a 1979 Garfield daily for $1,700.

Todd McFarlane’s Incredible Hulk splashes are still affordable (compared to covers) at $12k, a John Byrne wraparound cover with many characters, including She-Hulk, made somebody happy at less than $10k, $2,600 for a Superman half splash by Jim Lee seems like a good deal in 2019. Good deals are also this Namor title splash by Infantino/Layton for $2k, a nice X-Men page by Marc Silvestri for $1,200, Doctor Strange original art by Jim Starlin for $1,000, an Avengers half splash by Alan Davis for $900 and a Scarlet Spider-Man splash by Ron Lim for $750. As I usually do I forgot to bid on this Hulk pinup by John Buscema, that went for less than $1k, in the last hours. 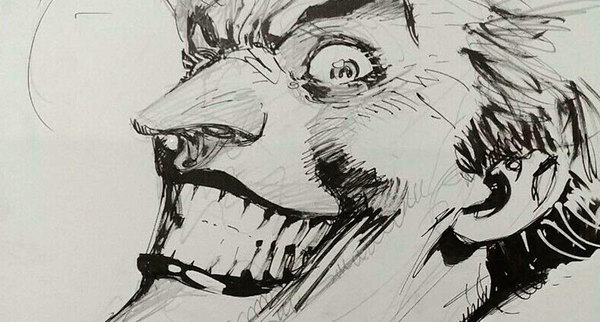 If you ask me, I’ll never put a page for sale on eBay in the middle of summer… seems like everybody else does, so it’s a very good week for comic art collectors!

Marvel: an Alpha Flight page by John Byrne, a Thanos half splash by Alan Davis, a nice Punisher page by Klaus Janson, many characters in this Infinity Crusade page by Ron Lim, even more Marvel heroes in this George Perez Avengers page.

Not the best Captain America page ever, but it’s drawn by Buscema and Romita.

We close with Humberto Ramos: a color “Fastball Special” (I think prices today are higher for a 2 char. commission). Then a cheap X-Men DPS and one that costs a bit more.

An horror cover by Nick Cardy, an Hellblazer cover sketch by Simon Bisley, an Authority painted cover by Glen Fabry.

A Scarlet Witch color commission by Bill Sienkiewicz, a Captain America illustration by Mike Zeck, Spidey Vs. Mysterio by Alex Saviuk and a Punisher half-splash by Bill Reinhold.

A Miracleman page by Chuck Austen, a Red Sonja cover by Sean Chen, a Mystic splash by Brandon Peterson, a sketch by Frank Frazetta.