Published on 12 Luglio 2019 by Comicart.tips

A Green Lantern splash by Darryl Banks for $500 is a good catch, the niceAvengers page by Paul Ryan went for $330 and the Dennis the Menace panel for $260.

ComicLink: Jock sketches are VERY in demand lately, the Batman sketch made $2,700. Is the Amalgam crossover coming back in the mind of comic art collectors? A Butch Guice splash was sold for $2,700. The Kirby page and the Wenzel Moon Knight went for $2,000.

Now for the usual bargain section of every CL auction, look at that nice Romita Jr. Spider-Man page sold for $750 and the Avengers art for $350. Old Adam Hughes prelims seem to me like a good way to take home a nice piece without having to spend $2k for a tiny commission… look at this nice Vampirella sold for $450 and this Wonder Woman for $300.

Ken Lashley has many fans, I’m surprised this one went for only $200. A beautiful Deathlok page by Lan Medina went for $200.

If you were interested in art auctioned by Hakes and Profiles in History they’re ending today. 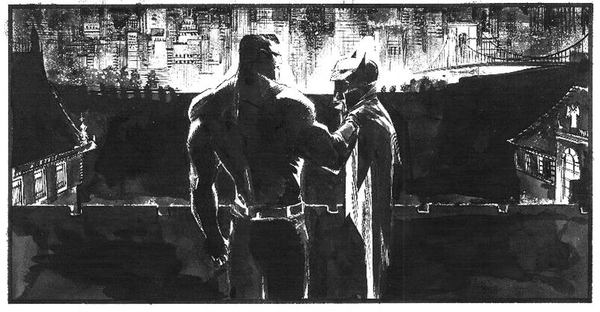 Sean Murphy Comic Art – Look at the background on this panel

Summer is going strong, nothing sensational this week on eBay, but many little nice things.

Some Camelot 3000 pages by Brian Bolland, some cheaper, some pricier.

Timm again, with a painted Medusa sketch, a great Avengers cover by George Perez, Ultimate Spider-Man and a Venom half-splash by Mark Bagley.

I loved the Labyrinth movie when I was a kid, I just discovered John Buscema was the artist on the adaptation, this seller has three pages.

A TMNT cover by Kevin Eastman, a Dawn Painting by Linsner and some nice Tarzan strips: a Sunday by John Celardo and dailies by Dan Barry and Bob Lubbers. There’s also a very nice Corrigan daily by Al Williamson.

A couple of very nice Superman pages by Gary Frank (one, two), an Azrael splash by Quesada/Nowlan and a rare Invisibles page by Frank Quitely.

Look at the incredible background details in this League of Extraordinary Gentlemen page by Kevin O’Neill. A nice Hellboy page by P. Craig Russell, early American Flagg page by Howard Chaykin and a 1974 Star Trek illustration by John Byrne.

Longtime collector, comics pro and Comic Art Tips reader Larry Shell is having a difficult time and needs help. Many of his cartoonist friends donated original art that will be inside Heritage’s Sunday auction on July, 21.

If you want to see all the pieces on auction here’s a link, and here are my highlights: a Xenozoic Tales illustration by Mark Schultz, a great Masks cover, starring several Golden Age heroes and a detailed Archangel splash by Butch Guice, a Batman portrait by Neal Adams, a Dawn pinup by J.M. Linsner.

There are also a beautiful 1978 illustration by Art Spiegelman, an incredible Daniel Clowes ink portrait of Frankenstein’s Monster, a Best of EC Comics Artist’s Edition signed by Al Feldstein and many other nice pieces. Go take a look!

Yesterday I went to see all the listings in this auction thinking “maybe there’s an illustration drawn by a comic artist…”. You bet there were, but I had to scroll several pages to find them, that’s my job here..! 😅

The most famous science fiction artist in comics was Wally Wood, and there are not one but 14 pieces. Some pen and ink, some B/W and some color paintings! The big one is this Weird Science cover color recreation, then a very nice 1958 book cover, a color prelim and a nice cover color guide by Marie Severin.

Mark Schultz has three pieces, the cover to Xenozoic Tales #3, a 1994 illustration and a 2015 cover. A 1969 cover painting by Bernie Wrightson and a 1967 paperback cover by Jeff Jones.