Published on 28 Giugno 2019 by Comicart.tips

Welcome to #91 of Original Comic Art Tips!! Art sales are not paused for the summer heat, many different auctions to see, this week, and a big eBay section after a couple weaker issues!

The Hellboy pinup by Mike Mignola went for $950, the Spider-Man half splash by Mark Bagley went for only $350. An X-Men page by Greg Land ended at $90 and the very nice Shazam painting by Lan Medina was sold for $250.

Sea Devils by Russ Heath, a Hellblazer page by David LLoyd, a Solomon Kane page by Mike Mignola and a Hellboy universe page by Max Fiumara.

Strips: a big selection of Alex Raymond art, look at this beautiful Rip Kirby daily, another nice one here and even a Jungle Jim topper. A 1961 and a 1962 B.C. Sunday.

Many great Spider-Man pages: a Jim Mooney half-splash, Al Milgrom with Spidey and Black Cat vs. Doc Ock, Ed Hannigan with Spidey vs. Electro, then Ron Lim and Ron Frenz. 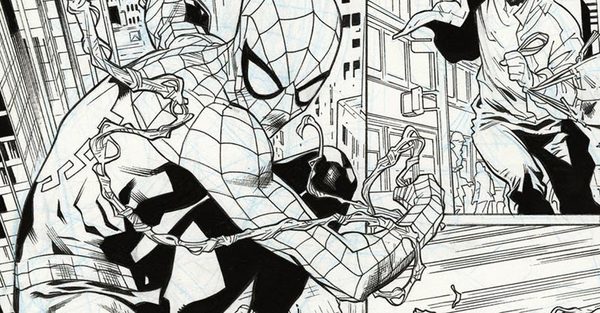 It’s time to see another monthly CL auction, this is the first half, come back next week for the second.

In the usual alphabetical order (A to M) we start with Dr. Strange by Chris Bachalo, a Batman sketch by Brian Bolland, a nice Spider-Man page by Jim Cheung, Batman by Tony Daniel, a Poison Ivy pinup by Terry Dodson, a Spider-Man semi-splash by Stuart Immonen.

A Detailed Batman sketch by Jock is getting a lot of bids, a Hunger Dogs page by Jack Kirby, an X-Men page by Andy Kubert and a Savage Dragon page by Erik Larsen.

is doing a lot of auctions lately, this time we have dozens of nice and low priced pages and a few interesting pieces, the big one is a Sgt. Kirk page by Hugo Pratt.

has a Herb Trimpe color commission of Wolverine and an Hellboy pencil sketch by Mike Mignola.

has a bigger selection of important pieces, an XIII illustration by Vance, a Captain Victory page by Jack Kirby, a Conan page by John Buscema, a Thor page by Mark Brooks, a very nice Sky Doll pinup by Barbucci, a Blueberry page by Blanc Dumont.