Published on 9 Maggio 2019 by Comicart.tips

Welcome to Original Comic Art Tips #84, for some coincidence several nice Marvel pages are ending today, if you opened this newsletter early run to the eBay section… If you’re late there’s a new blog post on the website. Link at the end.

A Master of Kung-Fu page by Gene Day went for $560, the nice Invaders fight page by Frank Robbins was sold for $780.

The big lot of Superman original art made some fans happy: Dan Jurgens art for $150, Tom Mandrake and Pasqual Ferry for less than $80, Leonard Kirk for $120.

The Romita Sr. Daredevil page was sold for $2,100, a very good price for a Romita fan, considering that a same level page from the Silver/Bronze age would cost 8/10 times more.

Bargains: as usual, auction starting at $0 go for very different prices than fixed prices sales, especially for commissions. A nice Batman DPS by Tony Daniel was sold for $650, a Wonder Woman cover for $550 and a Superman splash for $300. An U X-Men page by Chris Bachalo went for $170, an Iron Fist commission by John Byrne for $475, a color Spider-Man bust by Ryan Ottley for $170 and somebody bought this nice Spider-Man pinup by Bill Sienkiewicz for $280. I’m happy for him.

The Jim Lee Batman pinup was sold for more than $20,000, with the money going to charity. 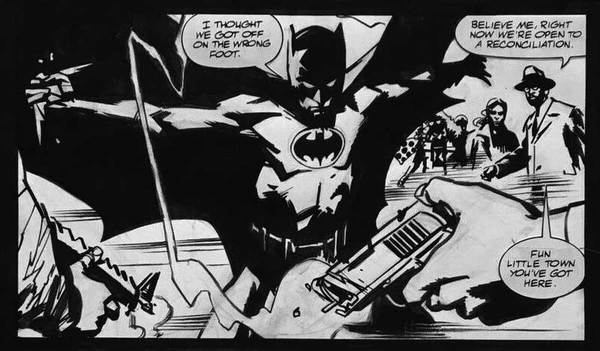 Not the best page of the week, but I like J.P. Leon

There are some nice Marvel pages ending TODAY, so I’m starting from them: very nice (and cheap, for now) Spider-Man: Chapter One page by John Byrne… think quick.

Then a Fantastic Four splash by Paul Ryan, a great Terry Dodson Harley/Poison Ivy 2/3 splash still at LESS THAN $200 (I hope somebody here will thank me tomorrow for this one). Another Terry Dodson page with Emma Frost, a nice and very cheap Andy Kuhn Spider-Man Adventures page, an Ultron preliminary illustration by Simone Bianchi.

If you need more time to think there are many other pages: Captain America and the Young Avengers by Jim Cheung, Frankenstein Vs. Dracula by Sal Buscema and Frankenstein Vs. a gun by Bob Brown. Ultimate F.F. original art by Adam Kubert, Black Panther Vs. Kraven in a rare sequential page by Joe Jusko, Wolverine by Steve McNiven and Logan by Humberto Ramos, a nice Peter Parker page by Romita Jr and a DPS from Spider-Man 2099 by Rick Leonardi. I don’t know who’s fighting who though.

DC: a Teen Titans page by Neal Adams and Nick Cardy and one by Steve Rude, Wonder Woman by Don Heck, a Metal Men splash by Sekowsky, Batman by Keith Giffen.

Mad illustration by Jack Davis and some strips: Green Berets by Kubert, a Blondie daily from 1931 and a 1940 Sunday, beautiful Brenda Starr 1942 Sunday and a Robin Malone Sunday.

We’ve arrived to part 4 of 4 and I’m still to the J of Jim Lee… with a Punisher/Wolverine Overstreet cover and a Superman DPS.

Thor original art by John Buscema, with a cover, a double Asgard pinup, and a page with Joe Sinnott.

Career spanning selection for John Byrne: an incredible X-Men DPS, a Phoenix page and many others.

A DC calendar cover by Neal Adams from 1977, a Ross Andru Spider-Man cover, a Preacher page with a similar design to the one sold a few weeks ago, a Creepy page by Wally Wood and a Spirit page by Will Eisner.

Strips, not much to see: a Terry and the Pirates Sunday, an Alley Oop daily and a Pogo Sunday.

The auction will start 7 days from now, don’t forget to bid if there’s something you like!

A post like the one I did for February (March wasn’t interesting enough), this time there’s a double Top Ten: one for the auctions and one for the Buy it Now art. Read Here. (at the end of the post there’s also a surprise: one of the links I use to see recently sold items). Share the article if you like it!!