Published on 2 Maggio 2019 by Comicart.tips

Here we are with #83 of Original Comic Art Tips! let’s start, as usual, with some Auction Results.

eBay: the Incredible Hulk cover by Dan Adkins ended for $13,500, not bad for an eBay auction. The Wolverine cover by Eduardo Risso for $1,600, the Don Heck Wonder Woman splash for $1,600, the John Byrne Superman commission for $1,300, the Hulk page by Sal Buscema for $1,300 and (big surprise) a Nightcrawler sketch by Marc Silvestri was sold for more than $800! A signed letter by Bill Watterson ended for $850…

Happy collectors bought a Wonder Woman bust by Sienkiewicz for less than $200, a Ditko page for $570, Spider-Man original art by Sal Buscema for $350.

Happy collectors bought a Tom Lyle Venom half splash and a Paul Ryan Flash DPS for $500 and a Jill Thompson Wonder Woman page for $380. 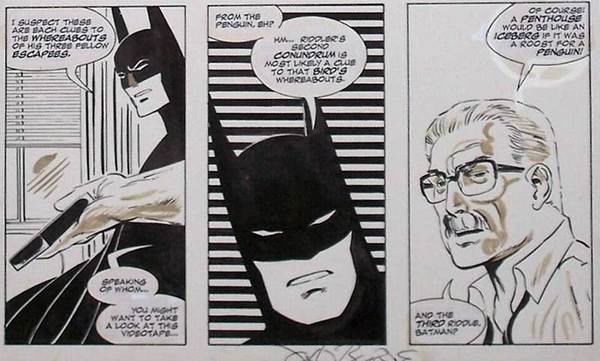 Nothing big, this week. Many nice, little pages you can win for small sums.

This week we have some great Marvel pages drawn by Johns: Romita with a Daredevil Vs. Kingpin half splash from his late 90’s one shot, Byrne a Fantastic Four page and a Spider-Man Vs. Iceman half splash, Buscema with two Conan action pages (one and two).

There’s also great original art not drawn by a John, with Avengers by George Perez, a Captain America and a Spider-Man page drawn by Mike Zeck, Hulk and Doc Doom by Jeff Purves, Spider-Man 2099 by Rick Leonardi, Excalibur by Alan Davis and Cap Vs. Crossbones by Steve Epting.

A Mina Harker sketch by Adam Hughes, a huge Godzilla by Geof Darrow, a Peter Bagge page, a Golden Age title page by Gill Fox and some strips: a rare Shoe Sunday by Jeff MacNelly, a Joe Palooka Sunday by Ham Fisher, very nice specialty pieces by V.T. Hamlin and Chester Gould, a Pogo daily, a Blondie daily and a funny Garfield daily.

As you probably already noticed from the title, this is not the last part of the auction highlights but I will finish it next week… too much pieces to see!

I start with George Perez, with many high end pages and covers, like this Teen Titans #21 cover, this Infinity Gauntlet page and an X-Men page.

Very difficult to choose only a few Gil Kane pieces, I can only start with this Red Sonja cover inked by John Romita, then a Conan title splash and a Green Lantern splash.

We’re used to the flood of great Jack Kirby art in every Signature Auction, this one is not an exception, with the cover to Fantastic Four #70, a full-team page from #66, a Thor/Galactus page and a Kamandi cover.

A 15 page lot from Incredible Hulk #180 by Herb Trimpe (the first cameo appearance of Wolverine, that page is not included). A Batman cover by Jim Aparo and a Superman cover by Jerry Ordway.

The first Maggie and Hopey page from Love and Rockets #1, a splash from issue 18 and a 7 page lot by Jamie Hewlett.

Strips: many Garfield strips as usual, like this 1983 Sunday. Many Hal Foster Prince Valiant pages, like this full 1967 Sunday and this great 1954 panel.

It’s time for another bi-annual Urania auction. As usual there is a tasteful group of vintage illustrations and comics pages from the Italian and European market, if you have the time go and take a look.

I will highlight some of the pieces with an international interest, a Dino Battaglia page, a page from Dylan Dog #1, Lo Scimmiotto by Milo Manara, Druuna by Serpieri.

Urania is the place to go for Andrea Pazienza original art, this time we have the best selection ever, with many pieces, like this Pentothal splash. A beautiful Jacovitti page, a cover by Manara, one by Liberatore and a Hugo Pratt sketch you may get with a “low” price.

A Magnus page by Russ Manning, JLA cover by Arthur Adams, a Black Panther page by Jack Kirby, She Hulk original art by John Byrne, a Doctor Strange cover by Gabriele Dell’Otto, a Daredevil and a Spider-Man page by Tim Sale, a Robin cover by Sienkiewicz and an X-Men page by Marc Silvestri.

Once in a while Jim Lee makes a Batman pinup to offer for charity, it already happened a couple times since the beginning of this newsletter and they all went for record prices.

This one is ending next Sunday and at the moment it’s at $9k.