Published on 11 Aprile 2019 by Comicart.tips

Welcome to #80 of Original Comic Art Tips, some impressive results on eBay and Ha, a long and full of surprises ebay comic art section and some Manara art this week! let’s see.

Happy collectors bought the Thing Vs. Rhino original by Angel Medina for $120, Spider-Man Vs. Venom by Ryan Stegman for $160 and a B.C. Sunday page for only $220.

Lots of original comic art pieces were sold for high prices last Sunday at Heritage, the Steve Bissette Swamp Thing went for $13k, the Kane/Romita Spider-Man page was sold for the same price, the Kane/Esposito for $5,7k and the Kane/Janson Hulk for $2,6k.

ComicLink auctions are always interesting, a good 70/80% of the lots offered end for very low prices, much less than what you would pay by going to the source (dealer or artist). A Green Lantern splash by Ethan VanSciver went for $300, a Captain America page by Chris Samnee for $276, a Hulk splash by John Romita Jr. for $573, a Thing Vs. Namor half splash by Olliffe/Williamson for $335, a Superboy cover by Tom Grummett for $500, Spider-Man original art by Mike Deodato for $350 and many more examples.

The same can be said for commissions, they sell on the secondary market for less than what they were paid, especially if the character depicted is not heavily collected. So a very nice painted Mary Jane by Andrew Robinson went for $90, a painting by Jeff Dekal for $300, a color pinup by Tony Daniel for $200, a very detailed Hulk Vs. Cap illustration by Lui Antonio for $130, all of the X-Men by Joe Bennett for $350 and the Punisher is killing zombies for $600 as drawn by Tony Moore. 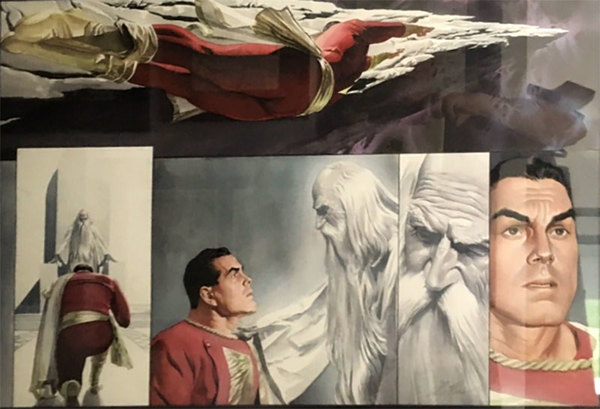 Some very high end pieces of comic art this week! look at this Captain Marvel painted page by Alex Ross, the Joker Vs. Superman by Greg Capullo, Teen Titans original art by George Perez, a Lobo pinup by Jim Lee. The price for this Wonder Woman page by Perez was lowered by 1/3 so I’m showing it again.

Another WW page by Don Heck, nice Superman by George Perez, cheap Batman half splash by Segovia, Robin by Burnham, Green Lanterns, Batman and Robin half splash by Paul Pelletier, JLA half splash by Jerry Ordway and some Byrne: Wonder Woman 1, WW2 and Nightwing.

Jack Kirby animation drawing, cheap Ultraverse cover by Mike Zeck, Spawn by Capullo/McFarlane. Strips: this Smiling Jack Sunday is getting a lot of bids, a B.C. daily and we’re done. 😅

Marvel: a Paul Smith page from X-Men/Alpha Flight, Excalibur by Alan Davis, a nice Ghost Rider page by Bob Budiansky, Iron-Man by Luke McDonnell and a great art team on a forgotten one shot: a Dr Strangefate page by Garcia Lopez/Nowlan.

After a sad HA preview we can be happier with this Catawiki auction with 11 pieces painted by Milo Manara.

The best one is this strip from the Borgia series, a full pencil illustration, a Candid Camera strip, and you can see the entire auction here.

See you next week, I will probably start looking at the next Heritage Signature Auction, I’m waiting for all the lots to have pictures attached..!