Welcome to #78 of Original Comic Art Tips!! Last week’s “best of eBay” blog post was a big success, with almost 500 visits in 48 hours..! I’ll do it again next month if time permits, and welcome to new subscribers who came through that post.

Heritage Sunday Auction: the Thor page by John Buscema went for $4,500, the Hellblazer cover by Simon Bisley for $3,100, the Shang-Chi page by Gulacy for $2,600, the Avengers/JLA original art by George Perez for $2,400. A Daredevil page without Daredevil by John Romita Jr. made $1,000, the Avengers page by John Cassaday went for less than $400, Thor original art by Ron Frenz for $300 and Batman by Rick Leonardi for $250.

Millon: A sketched Tintin book went for €40,000 (!), the Tintin calendar illustration for €24,000, the Shuiten double page for €31,000. Almost all the other pieces in the auction went for pretty high prices.

The auction from Weiss ended today but, as usual, it’s impossible to see results on their website. The first original art auction from Art Rite is ending now, we’ll see the results next week.

Still 3 days to go for the Batman pages by Sean Murphy, one is at $2k and the other at $1,5k. For DC Comics we also have a Legion page by Steve Ditko, a nice Wonder Woman page by George Perez, WW by John Byrne, WW and Superman comic art by Tyler Kirkham, Batman/Deathstroke by Carlo Pagulayan, Teen Titans by Perez, and Green Lantern by Rich Buckler.

Marvel: great page from Fantastic Four by Buscema/Sinnott, Nova original art again by Buscema and a cheap Wolverine with Sienkiewicz. Sal Buscema has a Sabretooth and a Steve Rogers, also a nice Steve Rogers page by Byrne, Captain America action page by Ron Lim, full-team 1983 Avengers page and one from Uncanny X-Men #217 by Butch Guice, X-Men by John Romita Jr. and a Mary Jane sketch by Romita Sr.

An Incredible Hulk page by Rob Liefeld, one by McFarlane with the X-Factor, a color Wolverine bust by Humberto Ramos and what looks like a cover quality Spider-Man commission by Roger Cruz.

An Hellboy pinup by Mike Mignola, the original cover to House of Mystery #239 by Garcia Lopez, two Walking Dead illustrations by Tony Moore, a Preacher page, an early TMNT pinup by Eastman/Laird, Spawn art by Greg Capullo and a Captain Atom splash by Jim Aparo.

Dan De Carlo nude girl panels from the 50’s always sell for high prices (one and two). No strips this week… 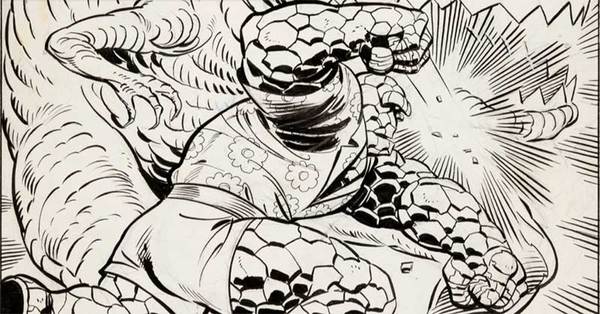 Lots of Marvel pages to see, we start with a Spider-Man page by Gil Kane, then Namor by Don Heck, Master of Kung-Fu original art by Paul Gulacy, a very nice Marvel Universe illustration by Marie Severin, Ms. Marvel by Dave Cockrum, a Thing splash by Ron Wilson and a painted Spider-Man page by Charles Vess from his classic graphic novel.

Thor original comic art by Walt Simonson is impossible to find, this week we have an Odin pinup from the Handbook. Nice Wolverine page by Marc Silvestri, a Namor splash by Rich Buckler, an Avengers back cover by Dave Hoover and a Conan page by John Buscema.

The first Alan Davis’ Excalibur page of 2019, let’s see how 3 months of scarcity will affect the end price.

Strips: an Uncle Scrooge daily by Al Taliaferro signed by Carl Barks, a Mickey Mouse daily by Floyd Gottfredson, a Wizard of ID Sunday, a page from Dell‘s Popeye #1 by Sagendorf.

Nate Sanders today (Thursday) will sell some Blondie strips from the Chic Young estate, the first, historical strips from the first year were auctioned in 2018, this time we have a little selection of dailies and Sundays spanning the entire history of the strip.