Published on 7 Marzo 2019 by Comicart.tips

Welcome to #75 of Original Comic Art Tips, be prepared for a very long newsletter, lots of results and many auctions coming up this week!

Ebay: the Wolverine original art by Marc Silvestri went for $2,400, the Avengers page by Jack Kirby ended, but was sold outside Ebay, the Amanda Conner cover art went for $1,100 and the 1951 Gasoline Alley daily went for $850.

Comiclink: the title splash to Fantastic Four #112 by John Buscema went for $43k, An end price of $40k+ until yesterday was usually the price for Buscema’s original cover art (but this is an exceptional splash). A John Byrne Fantastic Four page went for $17k. For a John Romita Jr. early 80’s Spiderman cover $21k, is a pretty high price, while a really high price is 21k for a 2004 cover (yes it’s also a great wraparound cover). A nice Spider-Man page ended for only $475. The Punisher sketch By Romita Sr. went for $1,550 (was sold on Ebay for $1,080 last December).

Based on the price list on Albert Moy‘s website, a bust commission without background by Jim Lee is priced at $7k. This Joker (with background) went for $4k.

If you have an Alan Davis piece to sell give it to Heritage: this Excalibur page went for only $1,250, the right price if you asked me just before last summer’s Davis craze.

This Richard Corben cover was sold for $52k, it went for $48k on Heritage’s November auction. Considering a 10% seller’s fee (am I right?) the owner lost a little bit of money by flipping it.

Now, for the regrets department, when I was browsing the lots I considered putting a $700 bid on this Lee Bermejo splash from 100 Bullets. It was sold for less than $400…

Happier collectors bought a wraparound Superman cover by Andru/Giordano for $2,600, a Frank Cho jungle painting and a Batman DPS by Paul Gulacy for $850, a Bryan Hitch Green Arrow cover for $475, a Wonder Woman illustration by Garcia Lopez for $350.

A Superman splash by Jim Lee for $1,900 isn’t bad, $950 were enough for this Preacher page by Steve Dillon and for this Thor page by John Buscema.

Heritage Sunday: the original cover art by Humberto Ramos went for $5,000, the World’s Finest cover by Ernie Chan for $4,500, the Teen Titans page by George Perez for $3,300, the Wolverine original art by John Buscema for $2,000.

Low prices for Alan Davis this week, a nice X-Men page went for $350. A very nice Batman page by Sean Philips ended for $240. 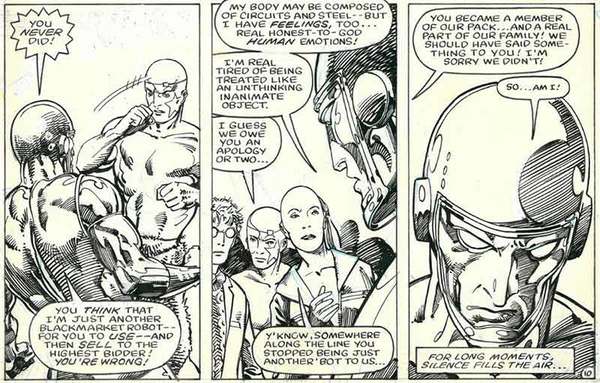 We start with Marvel, a Machine Man page by Herb Trimpe and Barry Smith, the same seller has Ka-Zar original art by Jack Kirby.

This week we have a page from Fantastic Four #128 by Buscema/Sinnott, a Thor half-splash by Sal Buscema, a Gene Ha X-Men DPS, a Black Widow pinup by Brian Stelfreeze and a nice Master of Kung-Fu page by Gene Day.

An EC page by Graham Ingels, a Ghita pinup by Frank Thorne and a Lady Death page by Steven Hughes.

Strips: an Al Taliaferro Donald Duck daily, a Dennis the Menace Sunday and a daily panel, an early B.C. Sunday and an On Stage Sunday.

I had to scroll through hundreds of prints and color guides, but I found a few great pieces. The title splash to Marvel Treasury Special #1, the cover to Mister Miracle #14 and a page from Journey Into Mystery #84 all by Jack Kirby. Original art from Conan the Barbarian #1 and #16 by Barry Smith, a page from Avengers #12 by Don Heck, Conan art by John Buscema.

The Cover to #110 of Green Lantern/Green Arrow by Mike Grell, the title splash to Aquaman #11 by Nick Cardy, an Aquaman splash by Pat Gleason and a Green Lantern DPS by Ivan Reis.

A beautiful Aristocrats Sunday, a Buster Brown sketch by Outcault.