Published on 7 Dicembre 2018 by Comicart.tips

Flash By Francis Manapul for $120 is a good deal as well as a Don Newton Batman for $250, a Cable half-splash by Ian Churchill made even less.

Heritage Sunday results: a Dick Dillin JLA page made $3,300, all of the Curt Swan pages performed better than usual, the Twinkies ad arrived first with $3,600. The Caniff illustration went for $1,400, a Mutt and Jeff daily for $1,800.

ComicLink results: As I told you last week, this was the best CL auction ever. The end prices reflect that, most of the items equal Heritage prices and some even surpassed them. We start with Michael Kaluta, a Conan illustration sold for $64k, for comparison his highest sale on Heritage was $20k. The 1991 Amazing Heroes cover by Adam Hughes made $17k. Usually his early art, before he developed his actual style in the mid/late 90’s, is valued much less than recent art.

A Fantastic Four page by John Buscema went for $20k, a Superman splash by John Byrne for $8k and a Wonder Woman splash went for a pretty affordable $1,400. A Gabriele Dell’Otto painting which traveled for years without finding a home went for $9k, the splash from Preacher #60 went for $7,500, a very high price for an issue late in the run. A Batman page by David Finch went for $2,100, a Batman by Sean Murphy for $3,400, a rare Lynn Varley color guide for the Dark Knight went for more than $5k.

The DC Trinity illustration by Jim Lee went for “only” $14k, easily worth at least $25k if sold at fixed price. Happy collectors bought a Superman/Batman page by Jae Lee for $280, an Infinity Crusade by Ron Lim for $550, an incredible Avengers DPS by George Perez for $3,3k, a Tyler Kirkham Superman DPS for $550 and a Thor title splash by Ron Frenz for $950.

We start with DC Comics and with a 1962 Flash page by Carmine Infantino. A Superman 1959 daily strip by Curt Swan, a Jim Aparo Batman page, a JLA splash by Dick Dillin, one by Barry Kitson and a third by Howard Porter. Superman/Green Lantern DPS by Darryl Banks, a Hardcore Station DPS by Jim Starlin.

Note: This is the first Sunday Auction in two years without the usual lot of Buscema pages.

Kids of the 90’s will like this Prophet card drawn by Jim Lee (I do). Unpublished Big Numbers cover by Bill Sienkiewicz, a Promethea DPS by J.H. Williams, Captain Victory by Jack Kirby, Black Kiss by Chaikin.

This auction is divided in two, the first half is regular superhero art and the second half is for The Walking Dead original art.

This Batman page is credited to Bob Kane. I can’t tell the difference… At least I can be sure that this cover is by Adam Hughes. A Bernie Wrightson Swamp Thing page and another one. 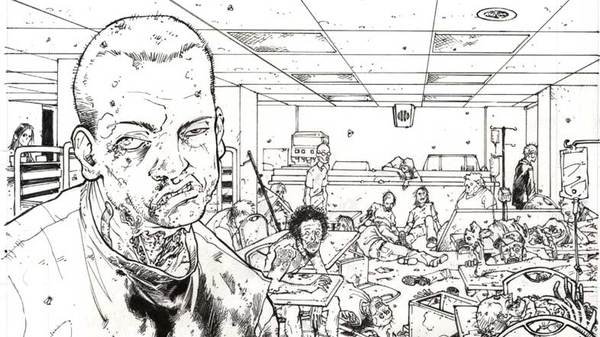 This is the third or fourth part of the Walking Dead original art auction on Comiconnect (they’re archived in the old newsletters). The first one was the best but they kept a few big pieces for every auction. This time we have the first appearance of zombies in TWD #1, the page 6 splash by Tony Moore.

More than 50 Charlie Adlard pages, if you want a TWD piece this is a perfect time, personally I don’t consider pages without zombies and this is the only one worth a look. For TWD drama fans there’s the birth of Judith Grimes, a Negan/Rick half-splash, a Negan/Carl splash, a cover for a reprint of #1 and a collection back cover. 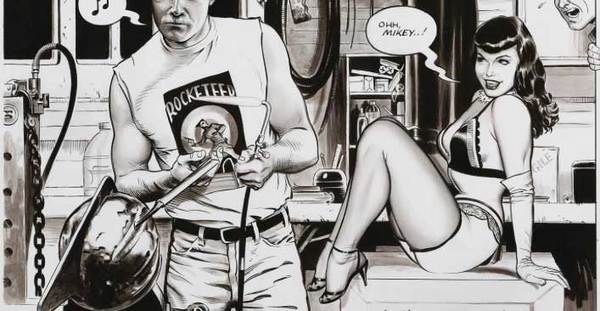 Some high-end pieces with very high starting prices. Some Peanuts strips like this Sunday one, some Frazetta pieces like this Johnny Comet daily, an incredible painted Amazing Spider-Man #40 cover recreation by John Romita, a couple of beautiful Jack Cole Playboy gags and a great Bettie Page illustration by Dave Stevens.

Many sketched albums by all the great French artists, if you want a “cheap” piece take a look at all the lots. I may bid on a couple. There are also some Largo Winch pages by Franq, and a painted Howard Flynn cover by Vance.

See you Next Week!!!