Published on 29 Novembre 2018 by Comicart.tips

Heritage Signature – part 2: Some crazy as usual Jim Lee prices: an unpublished Batman Illustration for $13k, a Hush Hardcover cover element for $7,200, a Deathblow cover for $6k and an All-Star Batman page for $6k.

More and more fans of Jim Starlin‘s Cosmic original art can’t afford his classic pieces, like this calendar illustration sold for $22k. Modern pieces are still pretty much affordable, with big growing potential. A Captain Marvel cover for $5k, a Thanos cover for $3,8k and a Thanos half-splash for $1,700.

John Buscema had dozens of pieces for sale, a 3 character Conan page went for $3,3k while a nice page inked by Sinnott ended at $780. A Silver Surfer page for $28k is a surprise, pages from the Wolverine GN for $7,8k are not, but if you wanted a Wolvie, this half-splash for $2,4k is not bad at all and another page went for $1,200. Originals from his first F4 run are growing quickly, but this later page from the 80’s went for $900.

Strips: the pre-Peanuts Li’l Folks panel went for $55k, the Sunday Peanuts strip for $63k, the Gary Larson The Far Side panel for $26k. The rare Milt Gross Sunday at $6k was by far the highest price paid for Gross original art on Heritage, the Rube Goldberg invention at $14,5k was not only the highest price paid for Goldberg on HA, but also a big increase in price since 2016, when another Invention was sold for $9,5k.

Heritage Sunday: the Thor page by John Buscema went for $1,600, the Conan half-splash for $1,300 and a nice Tarzan page for only $500. Our usual Happy Collector bought the Ian Churchill Hulk splash for $450, a Barry Kitson JLA splash and two Romita Sr. sketches for $350.

Dick Tracy strips with dead people always sell for premium prices, this daily made $2,200. A nicely drawn Rick O’Shay Sunday made $1,100 after months of low prices, the World’s Finest Tuska Sunday made $1,500. 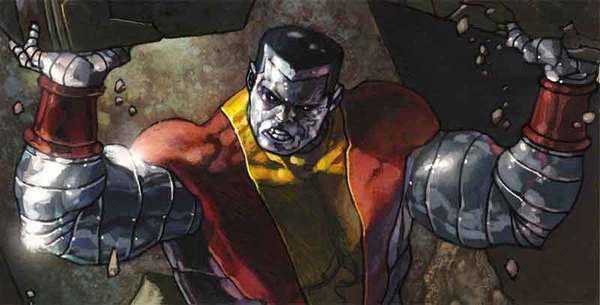 Metropolis Comics, months ago, had an exhibition/sale of Simone Bianchi paintings from Marvel Masterpieces 2018. Now they uploaded many on Ebay, I like Colossus, Spiderman Vs. Venom, Iron Fist Vs. Daredevil and Thor.

Very nice Fantastic Four #200 page by Pollard/Sinnott, Galactus splash by Byrne, Thing and ROM by Bob Hall, ROM by Sal Buscema. A page from Avengers #23 by Romita/Heck and another great illustration by Matteo Scalera, Punisher/Bullseye.

Conan By Buscema: one, two and three.

DC: two nice Flash pages by Francis Manapul (one, two), Flash by Don Heck, Nice Batman sketch by Norm Breyfogle, I know some readers here who will be following this auction… Batman sketch by Jeff Dekal, Batman by Don Newton, Joker by Francesco Mattina and by Bill Sienkiewicz.

A slow week over at HA. DC: An Arak cover by the underrated Ernie Colon, a Wonder Woman page by David Finch, a Flash page by Carmine Infantino, Superman Twinkies Ad page by Curt Swan.

Today I discovered that the Comic Link auction is their best ever, the level is similar to last week’s Heritage signature, but I don’t have three weeks to show you everything… I’ll try with the best piece from each artist.

5 Art Adams pieces from classic to modern, I like this Avengers cover. Ross Andru. Look at this Spiderman title splash. Jim Aparo has a ton, here’s the cover to Brave&Bold #140. Mark Bagley, an Ultimate Spiderman cover. Rich Buckler Avengers #140 cover.

John Buscema has a dozen, here’s a page from F4 #112. I like this Captain America page by Sal Buscema, the John Byrne pages are all great, can’t show you just one. Marvel 2 in one, Man of Steel splash, Wonder Woman splash. Nice Cassaday covers like this one from the Avengers. Gene Colan, the cover to Daredevil #26 and more. Many classic Flash originals by Infantino and this Batman splash.

HA‘s Kirby section won but we have many pages like this Thor splash. Great Wizard cover by Andy Kubert, DC Icons cover by Jim Lee. Prophet/Cable cover by Rob Liefeld, Incredible Hulk by Todd McFarlane, and and Incredible Avengers DPS by George Perez. Moon Knight by Stephen Platt, the perfect Romita Spiderman page, the death of Captain Marvel by Starlin, Venom by Stegman, and Conan by BWS.

Cambi is a big fine-art auction house in Italy, they noticed the growing comic art market and they’re doing their fist auction this weekend. End of the good news.

They asked for help to Little Nemo, which specializes in comic art auctions. The result is an auction that looks exactly like another Little Nemo Auction, no fresh air brought to the market and a 30% Buyer’s Premium.

Russ Cochran: the auction is ending today and is one of the weakest they’ve ever did, if you’d like some cheap strips go take a look, you never know.

Swann is doing an auction with a few pieces but with great taste, most from the New Yorker: a beautiful Charles Addams panel, William Steig, a Peter Arno cover.

A Doonesbury daily, some Russell Patterson panels and there’s a handful of Peanuts daily strips with a starting price of $5/6k, I don’t know the size of their audience, but if it is smaller than Heritage you can try to win one for a good price.

See you Next Week, We’ll see if the final prices for the high-end art on Comiclink will reach Heritage’s level, and the usual great art!!