Published on 23 Novembre 2018 by Comicart.tips

Heritage Signature: everybody already knows that the Krigstein “The Master Race” complete story sold for $600,000 and was bought by the Boon Foundation in Belgium in anticipation of a comic art museum they’re building. It makes sense. The Captain America cover by Jack Kirby went for $264k, the X-Men #10 splash for $99k and the page from X-Men #1 for $90k. The Batman page by Frank Miller went for $38k, the Howard the Duck #1 splash by Brunner for $43k, the Enrico Marini Batman page for $26k. The Weapon X cover by BWS ended at $50k, a very nice interior page for “only” $9k, but this close-up Rune splash is not so bad for only $840. The World’s Finest #168 cover by Curt Swan sold for $50k, it was sold 2 years ago for the same price, take off the buyer/seller’s premium and the owner lost a good sum. The Giant Size X-Men page by Dave Cockrum went for $30k, an U-X-Men page by Andy Kubert went for $3,100. Usually better pages go for less than 1,5k. Prices are going up fast for mutant pages by Andy, you better buy one fast if you are on the fence. $6,600 for an Avengers/JLA DPS by George Perez seems like a good price if you can afford it. A Gil Kane Thor splash for $3,600 is even better. A steal is a GK Batman splash for $700. Look at this incredible Avengers splash by Greg Land sold for $780, a zombie fight TWD page by Charlie Adlard for less than $500, a Spiderwoman color pinup by Bruce Timm for $900.

This newsletter is already too long, I’ll do the second half next week..!

Did you say Spider-Man? Don’t forget that the Erik Larsen page is ending in 2 days, it’s “still” at $1,300. Then 2 very nice John Romita Jr. pages (one, two), Sal Buscema original art from Amazing #181 and don’t miss this cheap Ed McGuinness Spiderman/Deadpool half-splash. A commissioned finished cover by Ron Frenz for $99 OBO. Be quick. Not only Spidey but the entire Marvel Universe in this Infinity Crusade Tie In page by Alex Saviuk, a full team page from Avengers #128 again by Sal Buscema, Avengers by George Perez, Andy Kubert drawing The Rhino and a Daredevil sketch by Jim Lee. Not the best sketch he ever did but it’s really cheap. A 2 page lot of X-Men art by Chris Bachalo, X-Men by Leinil Yu and King Conan by John Buscema.

DC: A Batman and Joker splash by Jim Lee for $5,500? It’s possible if it’s drawn in a different style than we’re used to… Two stunning Batman full figure illustrations by Tim Sale and Matteo Scalera auctioned for charity. Amanda Conner art is rare these days, we have a Superman page, Green Arrow/Black Canary and Batman. Early Catwoman by Chris Samnee, Robin by Don Newton, a Superman page by Tom Grummett, World’s Finest by Rich Buckler and Superman by Ed Benes.

The usual piece you don’t expect to see on Ebay: an EC page by Wally Wood. Wow!! Love and Rockets by Jaime Hernandez, The Walking Dead by Adlard, half of a Li’l Abner Sunday from 1937 and a funny Hagar daily strip. 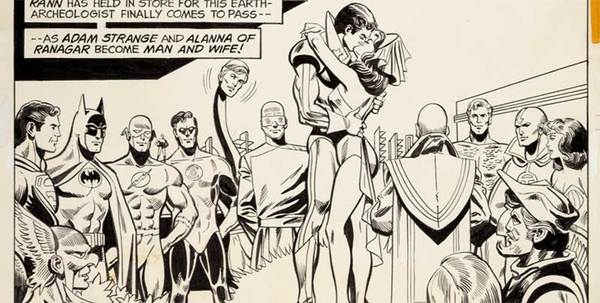 DC: Adam Strange is getting married in front of the entire JLA as drawn by Dick Dillin. Green Lantern by Joe Staton, Superman by Curt Swan. Catwoman by Paul Gulacy, a JLA title splash by Barry Kitson, JLA by Howard Porter and a beautiful Superman/Batman Sunday strip by George Tuska.

Strips: Hi and Lois Sunday, very nice Orphan Annie Sunday, one of the most detailed Bringing up Father dailies I’ve ever seen, our usual Long Sam and Robin Malone Sundays.

It’s time again for a great Arcurial auction. Many high end pieces with very high prices. I’ll have to be quick.

Bilal, Herge, a beautiful, early Ranxerox page, Manara has a great Borgia splash, an Indian Summer page, a Giuseppe Bergman, a Romeo and Juliet painting. A Gypsy cover by Marini, a Valerian cover by Mezieres, a color Arzach page by Moebius and a Garage Hermétique, A detailed Thorgal page.