Published on 8 Novembre 2018 by Comicart.tips

No doubts that the best piece for this week is this Spiderman daily strip by John Romita, it’s still well below its market price, we’ll see.

DC: the second half of the Inktober daily drawings by Chris Samnee. I like the Bat-cave, vampire Batman 1 and 2, Bane and Batman who Laughs.

Batman-TMNT cover by Kevin Eastman, an early Frank Cho Cavewoman pinup, a Wildcats page by Jim Lee and a nice Cyberforce by Mark Silvestri. A Hellboy bust by Mignola with zero offers, maybe people think it’s a fake? It’s not.

For DC Comics we have a Dick Dillin JLA Original, a Superfriends title-splash by Ramona Fradon, Aquaman by Don Heck, JLA by Barry Kitson, a Batman commission by Andy Kubert (almost impossible to get something like this in 2018) and a Bill Sienkiewicz Batman sketch from the 80’s.

Marvel art starts as usual with a big John Buscema update, two great Conan pages with Alcala inks, SSoC #28 and SSoC #32. A Thor page, a beautiful Tower of Shadows half-splash and Tarzan with a panel clearly inked by Neal Adams. Then look at this incredible Sal Buscema Fantastic 4 page. A great Excalibur by Alan Davis, Namor Vs. Thing DPS by Geof Isherwood, Wolverine original by Greg Land and a Conan Pencil illustration by Sienk. Look again: a Gil Kane page from Amazing Spider-Man #150. 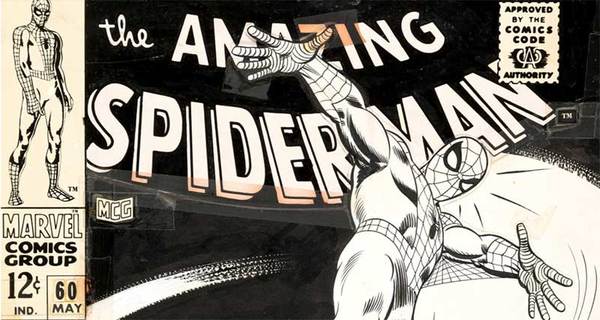 Here we are with part 2 of 3 of our overview. Click here to read the first part and come back next week for the third and for the auction.

Two complete Tomb of Dracula issues by Gene Colan, this is #37. Some top pieces by George Perez like the cover to Crisis #6, an incredibly detailed Avengers/JLA DPS and an Avengers title splash. Jack Kirby: incredible Kirby pages on Heritage are nothing new… look at page 1 from X-Men #10, and a page from X-Men #1, a page from Incredible Hulk #5, an Inhumans splash from F4 #83 and the iconic Captain America #109 cover.

Top pieces also by Jim Starlin, some modern cosmic covers and a few classics. A cosmic calendar illustration from 1976, a page from Captain Marvel #25, a Thanos/Thor cover from 2001 and a Thanos Vs. Galactus half-splash.

I don’t know where HA gets this continuous flow of John Buscema art. They sell 5 pages every week and a dozen for every event auction, more or less 30 each month. A Conan cover, every fan’s dream, a page with Conan, Red Sonja and Belit, a Wolverine half-splash, a Silver Surfer page and a great Thor splash.

John Romita Sr. has the cover to Amazing #60, Jr. Jr. a classic Iron-Man page and a Thor DPS.

Strips: a Johnny Comet Sunday by Frazetta, a 1921 Gasoline Alley Sunday, two ultra-rare The Far Side panels, a rare Orphan Annie daily from the 20’s, a 1917 Krazy Kat Sunday, a 1941 Prince Valiant Sunday, a 1981 Garfield Sunday with a great gag.

See you next week for the third part of Heritage’s auction and a lot more!