Published on 1 Novembre 2018 by Comicart.tips

Ebay results: the Thor page by Jack Kirby went for $4,600, I’m a little surprised by the Superpowers page for $2,700. The little Hellboy cover by Mike Mignola for $2,100. Basically what a second quality page (with tiny Hellboy images) from the latest comics would cost. I’d take the cover.

I’d bet that the Space Ghost sketch by Alex Toth went for less than $400 because it wasn’t inked by himself (even if the inker was a certain Bill Sienkiewicz). A sketch like this in pure pencils should sell for at least $800.

Heritage Sunday: the Alex Toth Sunday style strip went for almost $2,000, the barbarian with naked girls ended pretty low at $1,200, the romance splash went for his market price at $900 and the Hot Wheels page higher than market price at $840. The Bob Lubbers Tarzan style Sunday for $2,800, the Long Sam for $500 and the Robin Malone for only $400. 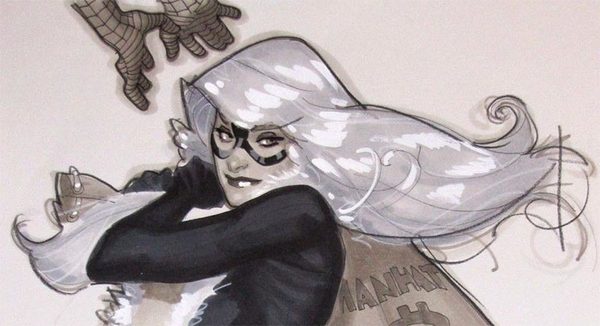 It’s November, and like in 2017, Chris Samnee is selling his incredible Inktober daily Batman sketches. This week we have the first 15, Batman in the rain, in the fire, on a Gargoyle, a Catwoman and more.

Many Adam Hughes pieces, a nice Black Cat commission, Mina Harker, Captain America, a Penthouse Comix page and a cheap Lady Death. The usual two Wonder Woman pages by Don Heck but this week they’re very nice. A Batman splash by Don Newton and a panel page, this Wonder Woman sketch by Neal Adams is going cheaper than his own prices. This Michael Cho Flash Sketch is much cheaper than his commission prices.

Several Walking Dead pages this week, this one is the best with Michonne and signed by Kirkman.

Strips: after many dailies a Hagar Sunday page, a nice Friday Foster, a beautiful Long Sam Sunday by Bob Lubbers and a Robin Malone, a Broom Hilda Sunday and look at this beautiful On Stage Sunday.

This auction is ending today! (November 1). My usual recommendation. There are many nice, little pieces that will sell cheap. You should go and search for your favorite artists… (quick) ComicLink makes it easy by writing all of the artist’s names on the left sidebar.

A Y: The Last Man page by Pia Guerra and an Invincible illustration by Ryan Ottley.

The Signature Auction is ending two weeks from now, there’s so much high quality Original Comic Art to see that I’m splitting my review in three parts, A to Z. This is part 1/3.

Barry Windsor Smith has a selection of artwork from many of his “modern” comics. The first is a Weapon X saga cover from MCP #82, then an interior page from #84, a nice cover from Eternal Warrior #7, a page from the first appearance of Rune, a pair of beautifully detailed fantasy comic strips and some more.

B. Krigstein‘s complete “The Master Race” from EC Comics is the cover item for this auction.

For Bernie Wrightson we have a Twisted Tales cover, a Chamber of Darkness cover and a DPS from House of Mystery.

Bill Everett has drawn Namor in all 6 panels of this page, a New Mutants splash by Bill Sienkiewicz, a beautiful Powell/Wood page from Daredevil #10. Again, Bruce Timm Art for Sale: a color Spiderwoman pinup, and look at this World’s Finest cover by Curt Swan! An Incredible Hulk cover by Dale Keown and a Dave Cockrum page from X-Men #94..!

A bunch of high end Peanuts strips (all Schulz originals are high end, I know, but these are some of the best) like a 1952 early Snoopy Sunday, a pre-Peanuts Li’l Folks panel, Lucy being Lucy and you can dream that this Peppermint Patty daily from 1991 remains affordable until the hammer (look for the other Peanuts strips on HA).

See you next week for the second part of Heritage’s highlights and the usual great new original comic art!