Published on 18 Ottobre 2018 by Comicart.tips

Ebay: The Erik Larsen Spiderman page is ending in a few hours, at the moment the price is near to $3k. Sadly the fake Bill Watterson Calvin & Hobbes watercolor was sold for $3,100, It copied the cover to the “Search for another planet” paperback compilation of the strip, the original painting would probably sell for at least $60-80k, but it’s well done enough to pass hands again and fool other buyers.

The John Byrne Superman page sold for $300, a good piece for a Byrne fan in a budget. A Night Nurse page by Win Mortimer was sold for almost $1,000. The Golden Age Flash page by Carmine Infantino went for $550 and the Flash original by Irv Novick for $275.

A nice Spiderman page by Steve McNiven went for $350, a Captain America page by Steve Epting for $330 and Avengers original art by George Perez for $450.

Heritage Sunday: It’s rare to see, on a low profile auction, a Conan page by John Buscema worth $1,000 and up, last week we had a good one.

In the last few years HA sold hundreds of Excalibur pages by Alan Davis, with great pages going for $500-$700. Lately prices seem to have tripled.

ComicLink: As usual every monthly CL auction ends with many pieces sold for peanuts. A nice semi-splash with many Marvel characters by Mark Bagley ended at $190. A great Ghost Rider panel in this original by Dave Hoover sold for $120, a full figure Harley Quinn sketch by Adam Hughes for $150 and a neat Wonder Woman cover prelim for less than $400. Captain America page by Dan Jurgens for $160. I thought that this X-Men page by Andy Kubert would end for more than $750. Two DPS by Doug Mahnke: Batman & Superman for $290, JLA for 370. A Wolverine/Nightcrawler page by Ed McGuinness for $140 sounds good? Then look at this Wolverine for $120. A Carlos Pacheco Colossus half-splash for $120, a Superman page by George Perez for $400 and an Impulse cover by Ethan Van Sciver for $650.

The best piece of the week for once is an Uncle Scrooge page by Don Rosa. Then look at this 100 Bullets page by Eduardo Risso.

DC: a page from Superman Vs. Wonder Woman by JL Garcia Lopez is flying high, Wonder Woman Original by John Byrne and Superman DPS by Mike Grell. Two very nice Gil Kane pages, this has Superman and Batman and this one has Zatanna and Aquaman.

X-Men: we start with a Dave Cockrum page from U X-Men #145, then a title page by Andy Kubert and original art by Humberto Ramos ending soon. Scarlet Witch by Sal Buscema from Avengers #133, then Luke Cage and The Incredible Hulk. Dr. Strange half splash by Chris Bachalo and Strange by Alan Kupperberg. Flash Thompson as Spiderman by John Byrne, Fantastic Four by Larroca, some tiny Avengers by George Perez, a Chris Bachalo Spiderman commission and a beautiful White Queen commission by Terry Dodson. No comic strips for this week…

DC: a Nightwing splash by Cliff Chiang, a Wonder Woman page by Phil Jimenez and a Paul Pelletier Flash page. Floating heads is one of my favorite layouts, here’s a JSA half-splash by Jerry Ordway, then a Lois Lane by Don Heck, a JLA page by Dick Dillin and a Superfriends page by Ramona Fradon.

Marvel: let’s see how high this Incredible Hulk page by Todd McFarlane will go. Beautiful Iron-Man cover recreation by Bob Layton, the price for a piece like this on his website is $700, you could try your luck with a lower offer.

John Buscema: an Avengers page, a beautiful romance page with Joe Sinnott, a Conan page with the Crusty Bunkers (some Neal Adams inks on the faces?), and a Two In One page with a great final panel.

Excalibur by Alan Davis (one and two), a Daredevil and Black Widow pinup by Paul Smith and a finished Scarlet Witch prelim by Bruce Timm.

Another great Rune page by Barry Windsor Smith, a Jeff Jones page with a low (for now?) price and many nice strips this week: one of the last Terry strips by Milton Caniff, masterfully drawn horses by Alex Raymond in this Rip Kirby, masterful use of black&white by Leonard Starr in this Mary Perkins daily, its’ very rare to find a Broom Hilda Sunday of this quality for sale. A funny Hagar as usual, a 1945 Dick Tracy daily and an Orphan Annie Sunday with very nice backgrounds. 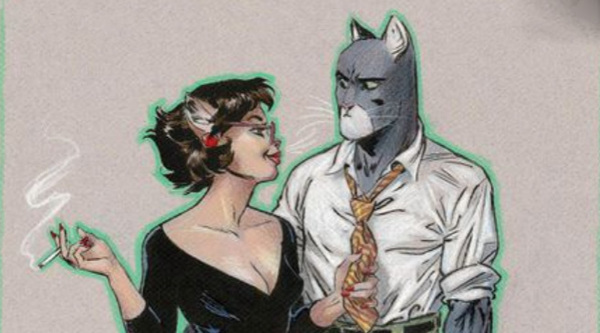 Many pieces in this Septimus Auction, most are for small/medium quality pieces by big artists. A tiny Gaston by Franquin and a nice Marsupilami illustration. XIII page by Vance, a beautiful illustration by Studios Uderzo, a Guarnido Blacksad original, a page by Gibrat and a Spirou cover by Janry.