Published on 12 Ottobre 2018 by Comicart.tips

Ebay: seems like the Savage Dragon page was sold for $1,000, a very good price for an early splash. The Captain America page by Gene Colan went for $775, the Invaders by Frank Robbins for $600, Lois Lane by Irv Novick $300, the Blackhawk page by Dick Dillin $650.

Some pieces went pretty cheap, like this Greg Land Avengers page for $130, the Fantastic Four by Salvador Larroca for $89, the Spiderman half-splash by Mario Alberti for $200 and the Walking Dead half-splash for $180. It’s funny, all the non zombie TWD pages with a buy it now tag have a price of $600-1,000, while the pages in no-reserve auctions all end between $200-300…

Heritage Sunday: the Buscema/Sinnott Fantastic Four page went for $2,600, the Thing pinup by John Byrne for $2,800, the Excalibur original by Alan Davis for $2,100 (they’re going up), the Red Sonja by Frank Thorne for $2,400. The Ty Templeton Avengers cover was sold for only $380 and the Phoenix commission by Paul Smith for $180.

The Starlin Batman page made almost $3k, the Rune page by Barry Smith $3,100 and the other page $1,100, a low entry point piece for BWS fans who can’t afford his more celebrated pieces. 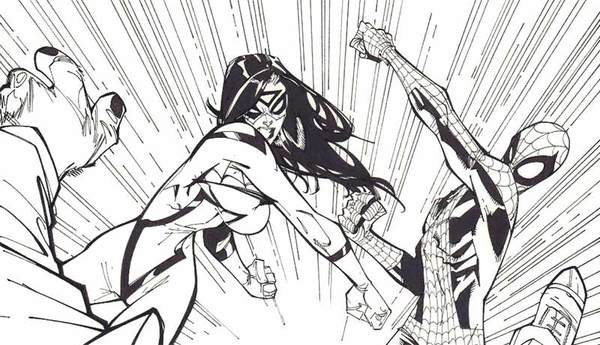 I know this will seem a repetition but this week’s best piece for sale on eBay is again an Erik Larsen page, this time from his classic run on Spiderman. They’re very rare, so bid on it if you can.

Another nice Spiderman piece is this splash by Humberto Ramos. Again Spiderman by Mike Deodato, Brett Booth and Steve McNiven.

This John Byrne Wolverine pinup is very good but eBay is not the right place for high end art… Some cheap pages by Steve Epting: Wolverine and Colossus here, Captain Britain here. A cheap Avengers page by George Perez ending in a few hours, Hulk by Rick Leonardi, Thor and Guardians by Greg Land, Thor and Cap half-splash by Rik Levins, Namor by Dave Cockrum and a Wolverine/Nightcrawler commission by Nick Bradshaw.

DC: we start with a Byrne Superman page, then a very nice Superman/Green Lantern page by Paul Pelletier, Supes original by Ed McGuinness and one by Tom Grummett.

Only a few nice pieces this week: The usual nice batch of John Buscema art: Avengers, Conan and Silver Surfer with Sienkiewicz on inks. Howard the Duck by Gene Colan, an Excalibur original by Alan Davis and Red Sonja by Frank Thorne.

An Impulse page by Humberto Ramos, Flash by Paul Ryan, half splash from The Golden Age by Paul Smith and a full Sugar and Spike story by Sheldon Mayer.

I searched for a written introduction to this auction with no luck, but it seems that artists donated the pieces to be sold in this auction. Let’s go.

A Captain America cover by John Cassaday, a Fairest cover by Adam Hughes, a Doctor Strange cover by Kevin Nolan, a Batman pinup by Kelley Jones and Nowlan, a Maxx cover by Sam Kieth, a Scooby Doo cover by Jim Lee (!!), an Astro City cover by Alex Ross, a very nice Hex page by Garcia-Lopez and a Blade cover by Bill Sienkiewicz.

See you Next Week!