Published on 21 Settembre 2018 by Comicart.tips

Ebay results: We start with Chris Samnee‘s Cap pages, this one made $1,200 and this was a nice page, for less than $500. This week I found 2 pages I wanted, but ended with nothing but money in my pocket. The seller of this nice JR Jr. Spiderman page was firm in his decision of not shipping outside the USA… and I sent a last second bid on this Conan page by J. Buscema, I offered what I think is market value and it ended a bit over that. better luck next time!

The nice Batman page by Norm Breyfogle made almost $1,000, the Travis Charest cover sold for the starting bid, the Matt Baker page made $3,000, and it was far from his best, Don Newton’s Batman made $1,200. Some pages ended at low prices: a Mark Bagley Avengers DPS for $270, a George Perez Avengers for $230, the Booster Gold DPS by Jurgens $280, a Pogo Christmas strip for $300.

We start with a high quality Jim Lee JLA page, a 2/3 splash with the full team and a Batman close-up. In this moment it’s still at $130, so we can all dream for a couple days… Let’s go on with DC art, there’s a nice Batman page by Jordi Bernet, the starting price is a bit too high. The Superman DPS by Alex Ross that was the most clicked item of last week is still live for some hours and still at $1,200. Eternals original art by Jack Kirby, a Batman by Don Newton and a very nice cover layout by Alex Toth.

Marvel. John Romita Jr. has a Hulk page, a Thor and a Cyclops original. Punisher by Bernie Wrightson, Iron Fist by Rudy Nebres, Thor by Buckler/Sinnott and Defenders by Sinnott and Perlin.

A Loki page by Sal Buscema, Spiderman by Mark Bagley and by Giuseppe Camuncoli, an Ultimates page by Bryan Hitch, Venom by Tyler Kirkham and Fantastic Four by Ron Lim.

A Spirit sketch by Will Eisner, an Alex Toth romance page, a Skottie Young cover, a Barry Smith Valiant page and strips: early Li’l Abner daily, a Dennis the Menace panel, a Star Wars daily by Russ Manning, a nice 1942 Alley Oop and a Buck Rogers by Calkins. 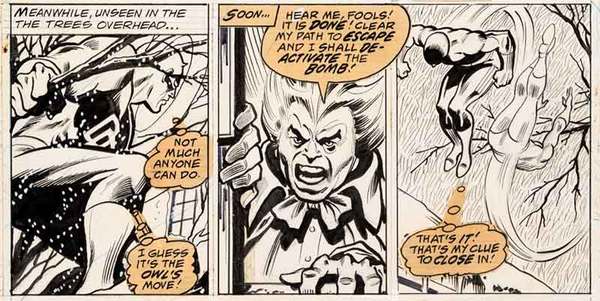 Many barbarian themed pages in the Marvel section this week, 2 Red Sonja pages by Frank Thorne (one, two), an Alfredo Alcala Conan splash and a Buscema half-splash. Speaking of Buscema we also have a Wolverine page with Sienk and an original from Avengers #84. A Planet of the Apes penciled page by Mike Ploog and a very nice Daredevil page by George Tuska.

Not much to see for DC fans this week, a page without superheroes from Brave & Bold by Neal Adams, a Batman page by Bob Brown, a Superman original by Curt Swan and a nice JLA page by George Tuska.

The most important piece of the week, for once, is from the Golden Age, a Count of Montecristo page by Lou Fine from 1938 and from Jumbo Comics, the first comic book. A sexy cartoon by Jack Cole and a Green Berets daily by Joe Kubert and we go from Golden Age artists to comic strips, a nice Terry daily by Caniff, a Corrigan by Al Williamson, a beautiful daily and a beautiful Sunday by Leonard Starr.

The guests at Nice Con donated some pieces to be auctioned on CataWiki, the auction is opening now with some very Nice pieces! : )

Alan Davis’ Nightcrawler is probably the most sought after lot, a painted Thanos by Ben Oliver, I really like this Cap Britain by Ian Churchill, everybody will bid on this painted Conan by Esad Ribic, a Joker face by Simon Bisley and a really nice John Watson Spiderman/Venom painting.

Great pieces in this new Millon auction, but not that many as we’re used to. A classic Largo Winch page, a beautiful Gaston by Franquin, a historic Blueberry by Jean Giraud, a Guarnido Blacksad illustration.

3 nice pieces by Manara, a Brigitte Bardot painting (also signed by her), an illustration from El Gaucho and a page from Lo Scimmiotto. Alix by Martin, a rare Smurfs painted piece by Peyo and a Serpieri Western themed original.

see you next week for more Comic Art Tips!