Published on 4 Settembre 2018 by Comicart.tips

Last week’s issue was written in a hurry because I was on vacation… I had no time to look at the ComicLink auction, but it is closing TODAY, so I’m sending this week’s Newsletter earlier than usual. You’ll also notice that this is an all-Byrne art day!

But let’s start with auction results. eBay: the Don Newton Batman splash ended at $1,600, Wonder Woman by Delbo $500, the JLA page by George Perez $1,000, the tiny Mike Mignola illustration $500, the Clark Kent page by John Byrne made $1,100 without the help of costumed heroes. Somebody bought a Spawn page by Angel Medina for $10.

Comic Connect: The Galactus half-splash by John Byrne went for $25,000 and the Fantastic Four original art by Jack Kirby for $23,000. The Justice League #96 cover by Neal Adams was sold for $20,000, the EC Comics page by Williamson/Frazetta for $15,000. This auction also had many affordable pieces: The Walking Dead pages with zombies are always in demand, a CBLDF cover by Adlard sold for $700. If you know the latest commission prices by Lee Bermejo this Hellboy for $500 is a good catch, the same can be said about this Iron-Man pinup by the recently retired George Perez for $250. 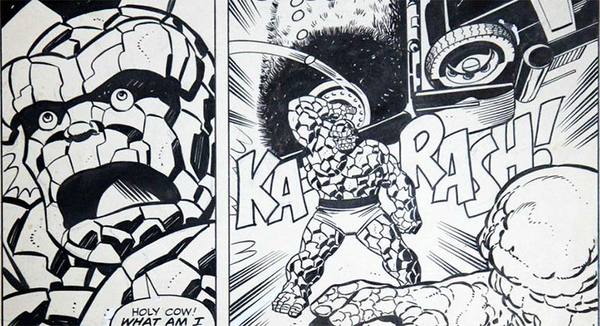 Chris Samnee has a new batch of art from Captain America #700, this is the cover, a double page, another double, a splash and many more.

Sadly no interesting strips this week… 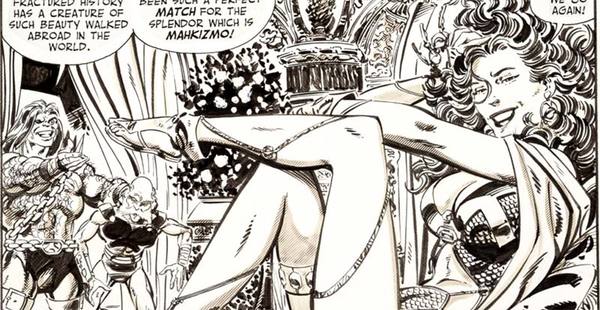 Many John Byrne pages like this Alpha Flight, Avengers, a She-Hulk half-splash and more. Hulk by Dale Keown, X-Factor by Walt Simonson, a Romita Jr. Daredevil original, Wolverine by John Buscema and by Art Adams.

The last ComicLink auction, in July, was disappointing… the auction closing in a few hours is the opposite, hundreds of great pieces. I’ll start with the most important ones. A Byrne/Austin X-Men page, a 1990 remake of his U. X-Men #137 cover, the war will be on this Spiderman DPS by Todd McFarlane.

The ultimate piece for the Marvel Cosmic/Movie fan is this Infinity Gauntlet #1 splash by George Perez. Historic is also the cover to “Daredevil: The Man Without Fear” #5 by Romita Jr., but the Daredevil #271 cover is great as well. Many Frank Miller pieces like this Daredevil interior art, Many Kirby pieces, here’s a Captain America cover. The title splash for Conan #6 by Barry Smith, a Warlock page by Starlin and a very rare (unique?) Lone Wolf and Cub illustration by Gojima.

Namor by Bill Everett, Master of Kung-Fu #1 splash by Paul Gulacy, Punisher and Superman by Jim Lee, a Spawn Splash by Capullo/McF. and the cover to Prophet #8 by Stephen Platt. Whew!!

See you Next Week with Original Comic Art Tips!