Published on 31 Agosto 2018 by Comicart.tips

Let’s start with some auction results as usual: 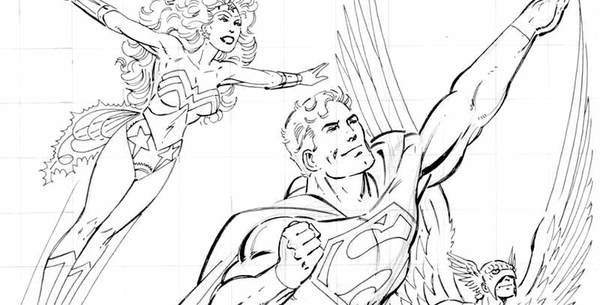 This Frank Cho Wolverine sketch went unsold at a fixed price a couple times and now the seller has finally put it on auction. This week we have 2 Avengers pages by Alan Davis with a full team panel, here’s the first, search for the second in the Heritage section. An iconic Fantastic Four cover by the same artist, 2 early Spiderman 2099 pages by Leonardi (one, two), a little Wolverine/Spiderman page by David Finch, a 1979 Avengers page by George Perez and one from 2000. An Iron-Man page by Tuska, a classic Captain America page by Sal Buscema and it’s time for some DC originals.

A Batman page by Don Newton with great bat-panels and a second page with one. Wonder Woman by Jose Delbo and by Don Heck, a Flash page by George Perez with the entire JLA in a panel, a 1987 Superman page by John Byrne with clark and Lana and, sold by Paul Kupperberg, a JLA drawing by Byrne. You could probably give it to one of his classic inkers to finish and add a background, making it a nice display piece!

Two cheap pieces by Jim Starlin, a Superman semi-splash and a JLA DPS.

A Ninja Turtles cover by Sienkiewicz, a tiny skull illo by Mike Mignola and a Mignolaverse skull cover by Laurence Campbell, a Grimjack splash by Truman, a nice Starman page by Tony Harris and a very well drawn Carol Day strip. 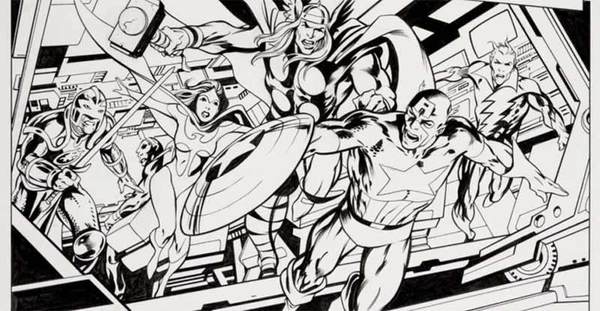 A Funny Conan illustration penciled and inked by John Buscema (I’m curious to see if this will end low due to the umbrella or high because it’s a great drawing…). A Namor page by John Byrne, a very nice Avengers page by Alan Davis and a detailed Killraven cover. A Kerry Gammill Spiderman/Man-Thing original, The splash to Iron-Man #77 by Arvell Jones, an Iron-Man page by George Perez, a Fantastic Four page by Romita Jr., a cover preliminary by Romita Sr. and painted Elektra commission by Sienk.

see you next week!