Published on 10 Agosto 2018 by Comicart.tips

The Bernie Wrightson Swamp Thing #2 half splash was sold for more than $14,000, I think it would do 2/3k more on Heritage. The New Superman cover by Philip Tan at $450 seems like a steal, a Superman page by Curt Swan for $300 is nice.

HA Signature: Many interesting auction results came in last week, I’ll start with Marvel. Gene Colan made his record with the $240,000 Iron Man/Sub-Mariner #1 cover, the highest price reached by a Colan original on Heritage was $89,000 for Avengers #63. John Romita Sr. is used to making records, the Amazing Spiderman #55 cover ended at $105,000, a classic early issue but it’s a Doc Ock cover… I’d spend 1/3 of that to buy an interior page with nice Spiderman panels. Meanwhile, this page at $9,600 was a good buy.

This Jack Kirby Cap splash was sold for $96,000, one of the highest prices realized for JK interior art, on the other end this Cap cover is one of the cheapest sold on HA in recent years at $22,000. A page from X-Men #1 went for $76k. Given the last spike in Jim Lee original art prices, $19,000 for a Wolverine cover and $17,000 for a wraparound Superman cover are good deals. For Sal Buscema see an interior page go for $10,000 was very rare until a few months ago.

The biggest surprise for Marvel art was Carlos Pacheco, his art has always been pretty cheap, with interiors going from $100 to 500 and covers that rarely sold for more than $1.000. This time two covers, X-Men and Fantastic Four both went for more than $7k!

Frank Frazetta‘s painting was sold for $660k! A Weird Science cover by Wally Wood for $90k, Mignola’s Hellboy: $17k and $8k, a early Dennis the Menace panel for $3,800 (all the other strips remained more or less inside their usual price range) Whew!! 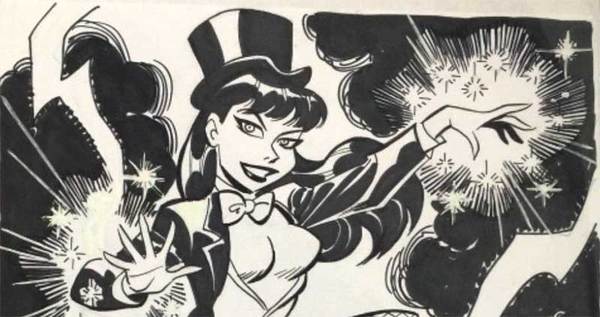 2 Jim Lee pieces on auction, a Punisher page and a Superman original. Speaking of Superman we have a Kingdom Come page by Alex Ross with Clark Kent already at $11,000, a Jurgens/Sienk DPS, a JLA page by Howard Porter and the cover to Lois Lane #114 by Dick Giordano.

Then a Zatanna commission by Bruce Timm, a Kamandi original by Jack Kirby, Batman/Green Arrow by Gene Colan, Batman by Nolan/Sienk, Batman Metal DPS by Philip Tan and a Catwoman page by Guillem March.

Back to Marvel with a Great Fantastic Four cover by Alan Davis, an Avengers page by Bob Brown and Don Heck, a very nice X-Men page by Stuart Immonen and our friend Chris Samnee who’s back with some Captain America pages: here, here, here and here.

A nice Hellblazer by David Lloyd, 2 Michael Zulli Sandman Presents pages, a Sandman by Dave McKean and a Mignola book Illustration. Strips: a rare Beyond Mars by Lee Elias, a Easy Sunday by Mel Graff, and a nice Kevin the Bold by Collins.

Marvel again (no interesting DC pieces this week) with a page from Captain America #1 by Steve Epting, I’m tempted… A Conan page with no Conan but with a naked girl by John Buscema and another Wolverine page by JB and Bill Sienkiewicz. A nice Doc. Strange DPS and a Sub-Mariner DPS by Geof Isherwood.

Strips: early Blondie daily (before the marriage), early colored Moon Mullins daily, the perfect Pogo daily with all the strip’s cast, two Terry and the Pirates dailies, early one from 1935, later one from 1946, a funny Broom Hilda and a Happy Hooligan. A Mary Perkins Sunday, a nice Green Berets Sunday, Orphan Annie Sunday and Li’l Abner Sunday.

See you Next Week with Comic Art Tips!