Published on 25 Luglio 2018 by Comicart.tips

Not much on Ebay, the Alan Davis Excalibur original art at $700 confirmed the prices made in the last months on Heritage, the Gene Colan Captain America page at $500 was a good catch, 2 Flash pages by Don Heck ended at $770, the Batman half splash by Don Newton went for $880. A Byrne page for $140 is always a good price (even for Next Men).

On Heritage Sunday the John Buscema Nova page went for $2,500 and the viking sketch for only $190 despite being a very nice piece. The Steve Dillon Wolverine was sold for $300 and the Herb Trimpe Namor for $900. The two Mark Bagley original comic art pages maintained a low final price with Venom for $200 and the same price for a Deadpool page.

The Alex Ross DC cover sketch went for almost $2,000, the Dan Jurgens Superman wedding piece for $1,600, the Nick Cardy Batman page for $1,000 and the Norm Breyfogle Batman for $900. A Gil Kane Ring of the Nibelung splash sold for $840 (so the starting price for the two similar Ebay auction you’ll find below looks right). 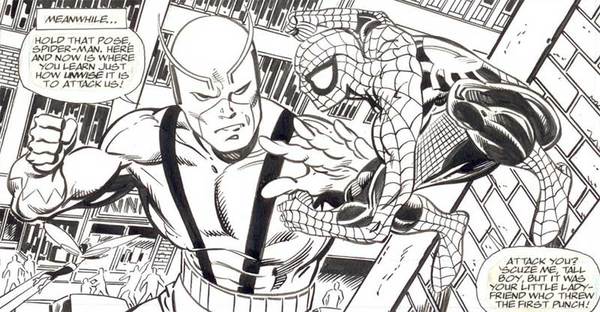 A seller has put for auction a big stack of Curt Swan Superman pages, the better are this Superman/Supergirl action original, and this page with the full JLA team. Speaking of DC we have a Wonder Woman original by Gene Colan, 2 WW pages by Don Heck, a Green Lantern page by Daryl Banks, a JM Linsner Harley Quinn and a Chris Samnee Harley/Joker pin-up, a rare Steve Lightle Flash piece, a George Perez Wonder Woman page and another New Superman cover by Philip Tan.

For Marvel Comics there’s the Gene Colan Howard the Duck #25 Title page, another Title page by Jack Kirby from Kid Colt #119 (I look forward to know the hammer price) and a John Buscema Conan page. Then a Chapter One page by John Byrne with Spidey and Giant Man, a Sienkiewicz Elektra painting (with a starting price too high for Ebay), a nice Mark Bagley original Scarlet Spider cover and a John Romita Jr. Spiderman/Thing original.

A detailed Hellboy pencil sketch by Mike Mignola still has zero offers, you can follow it and see what happens. Then a simpler Abe Sapien sketch has one offer… There’s a Dave Johnson cover with a low BIN price, if you like vikings you’re in luck. A Daniel Clowes early Lloyd Lewellin original art page is rare to find for sale, rarer on Ebay. 2 Beautiful Ring of the Nibelungs Gil Kane pages (one and two)

Strips: a very nice Green Berets daily by Joe Kubert, a Bloom County Sunday by Berke Breathed and a Larry Lieber strip with Spiderman in all panels.

A great week, dozens of pieces for sale, it was very difficult to make a selection… but here we go with something you don’t often see in the Sunday Auction, a Black Widow Painted cover by Bill Sienkiewicz and a Moon Knight page by the same artist. An X-Men half splash by Andy Kubert that you should buy if you can, they’re growing fast. A nice Leonardi/Williamson Spiderman 2099 original and still in the 90’s with a full X-Force team half splash by Tony Daniel. John Byrne Namor and She-Hulk, Buscema/Sienk Wolverine page, Buscema Thor sketch and 3 Mark Bagley original comic art pages that will go cheap (one, two, three).

Second half of the catalog, the Original Comic Art Auction takes place on August 3-5, see last week’s newsletter for the first half.

Beautiful Rip Kirby daily by Alex Raymond, a rare Austin Briggs Flash Gordon Sunday, a Tarzan by Foster and a Tarzan by Hogarth. An early Krazy Kat Sunday, a Dream of the Rarebit Fiend, and a Buster Brown.

A famous Frazetta, a Ghita illustration by Frank Thorne, a nude Bruce Timm Cover and the Dave Cooper cover to Crumple.