Published on 19 Luglio 2018 by Comicart.tips

Ebay: the little Hellboy cover by Mike Mignola made $2,000. The Batman page by Don Newton sold for $1,000, the Philip Tan New Superman cover for $670,00 and the Batman Adventures Splash for $350, a pretty low sum for a cover and a splash. The Stan Lee/Joe Kubert Just Imagine Batman page went for $600,00 and that’s all for DC.

The Green Berets daily by Joe Kubert went for $450, a rare Katzenjammer Kids Specialty drawing by Harold Knerr for $200, and a nice Tumbleweeds daily for $65.

The Mike Deodato JLA illustration went for $1,300 and the George Perez Teen Titans page for $2,100.

11 Dondi daily strips by Irwin Hasen went for less than $25 each and a Terry Sunday by George Wunder was sold for $260.

Nothing big is happening this week on eBay, probably because we’re in the middle of Summer. We have a nice Ron Lim Silver Surfer/Cap Marvel page with a good BIN price, a classic Gene Colan Captain America original, a Spidergirl/Spiderman/Human Torch page by Olliffe and Williamson, Excalibur by Alan Davis, a Fantastic Four half splash by Paul Ryan and a Red Hulk Half splash by Mark Bagley.

Then a Don Blake/Thing page by Trimpe and Romita Sr., a Kingpin cover by J.G. Jones, A quiet full-team Avengers page by John Romita Jr. and we go to DC Comics: Batman Vs. a black panther (not the one you’re thinking) by Don Newton, 2 consecutive Flash pages by Don Heck, another New Superman cover by Philip Tan, a cheap Next Men page by John Byrne and some strips: a Green Berets by Joe Kubert, and a Blondie daily. 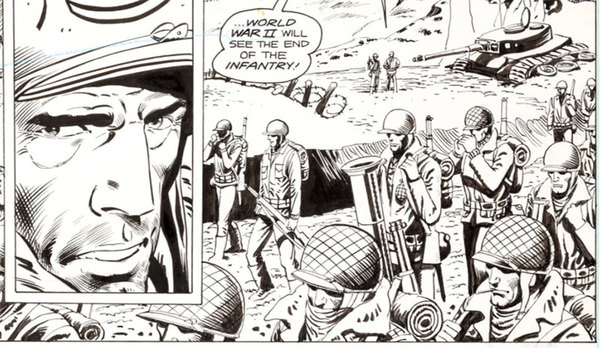 Go see the very low prices reached last week by Mark Bagley and consider these Venom Vs. Kraven and Deadpool pages. Speaking of Venom we have a Tom Lyle 90’s half splash and a Venom/Punisher page. A  Buscema/Sinnott Nova original and a Viking sketch by JB. A Andy Kubert X-Men half splash, a Salvador Larroca X-Men cover and a Wolverine page by Steve Dillon.

A Gil Kane Ring of the Nibelung #1 splash, a Ranxerox illustration by Liberatore and several comic strips: vintage Flash Gordon by Dan Barry, a beautiful Pogo Sunday, a Dick Tracy Sunday and a Orphan Annie Sunday.

As usual there are hundreds of great original pieces to sell, I’ll highlight the best ones from the first half of the catalog, see you here next week for the second part..!

Neal Adams has many pages, I like this Batman one. This Batman #319 cover by Joe Kubert is a real classic piece. Buscema has also some great originals like this Wolverine corner box art, this Conan cover, this great action page. and this perfect Thor page. A Heck/Wood Avengers #20 page and a Heck classic Iron Man title page. Some great Kirby pieces, a page from X-Men #1, a Cap splash, and I really like this FF page.

Many Wally Wood Daredevil pages (they’re resurfacing on dealers’ websites for 4x prices after a couple months) and several John Romita Sr. pages, I’ll show you this Doc Ock cover. Conan #5 cover by Barry Smith, Thanos page by Jim Starlin, and I was forgetting about this John Byrne UX-Men page!

A Gil Kane Green Lantern splash and some modern original art: look at this Jim Lee Wolverine, at this Mignola Hellboy page, this Killing Joke by Bolland and a Wolverine by Sam Kieth. 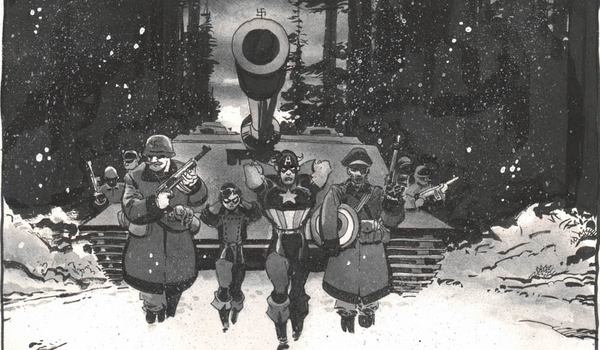 I have to admit I don’t see many interesting pieces in this auction after the incredible Heritage auction, I’ll try to find something… like a Superman cover by John Cassaday, a JLA page by Jim Lee, nice Flash page by Tony Daniel.

A Namor page by John Byrne, a Captain America splash by Andy Kubert, a Spiderman half-splash by Ed Mc Guinness, a cover quality double Avengers commission by Paul Smith, a powerful Punisher page by Jason Pearson and a Cap page by Tim Sale.

See you next week for the second part of Heritage Auction lots and the usual great Original Comic Art!