Published on 4 Luglio 2018 by Comicart.tips

Ebay Results: pages from The Pat Olliffe Untold Tales of Spiderman lot were sold for fair prices, the origin splash from #1 went for $600. The Mignola Hellboy page sold for $2,300 and the Sledgehammer cover for $3,000 (non Hellboy Mignola covers are increasing in price). Jim Starlin‘s Doc. Strange page ended at $850 and a modern Thanos half-splash for $550. The Chris Samnee Captain America cover remained a bit low at $1.000, but the great silhouettes page sold for more than $2.000. I thought the Iron-Man page by George Perez would sell for more than $1,600. Don Newton’s Batman page for $1,300, Garcia Lopez’s JLA cover for $1,000 and the Al Williamson snowy Corrigan daily for $800.

Russ Cochran: I have to remember to buy some strips from RC’s next auction if he has some more Mort Walker strips. Everything sold for much lower than market price, Beetle Bailey Sundays for $60 and dailies for $40. Boner’s Ark went for even less with Sundays for $50 and dailies for $20. Hagar the Horrible dailies went a little better at $325, Wizard of ID very low again at $150 and Andy Capp very very low at $80.

CLink: The X-Men semi-splash by Andy Kubert went for $2,600, nothing else happened (the auction was not interesting at all). 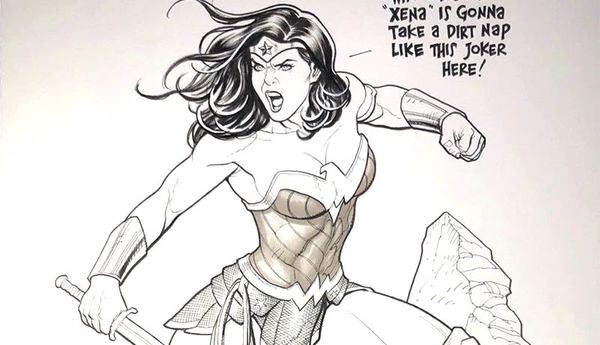 I’ve always liked vintage sketches, as much as I don’t care for sketches done yesterday, so I really like this Punisher/Wolverine drawing by Romita Jr. and this Cannonball by Bill Sienkiewicz.

A funny Dennis the Menace Sunday, and what looks like a Tarzan Sunday by Burne Hogarth (if you have a piece like this please don’t sell it on eBay with blurry photos, give it to Heritage).

Only a few DC pieces again, a Jim Aparo Batman/Joker splash and a Batman/Penguin/Joker page, a Superfriends splash by Ramona Fradon, a Jerry Robinson Batman/Robin sketch and a George Perez Teen Titans splash.

In non-superhero news we have a Charlton Title page by Steve Ditko, a beautiful pinup by R. Crumb, a Garcia Lopez Tarzan and a Sparky Moore Disney cover for Robin Hood.

Strips: Little Orphan Annie Sunday, Mary Perkins Sunday, Terry and the Pirates 1963 Sunday and one of the last dailies drawn by Milton Caniff.

See you next week, we’ll take a look at Hake’s Auction and the usual great original comic art!