Published on 25 Maggio 2018 by Comicart.tips

Here we are again, many surprises in this week’s auctions… Some interesting results first. eBay: 2 1994 Ironwolf pages by Mike Mignola ended respectively at $1,000 and $700. A Darwin Cooke Catwoman original made $1,600, the same price was paid for a George Perez Superman page. The Latest Batman page by Don Newton and the Jack Kirby Kamandi both went for $1,500. How often do you see a George Tuska Superman and a Rob Liefeld Captain America go for only $200? Speaking of Cap, Chris Samnee pages are going a little bit down in price every week.  He sold a cover for $1,300 and a splash for $2,100 but action pages like this one went for under $500. A few other cheap pages were this Flash/Green Lantern/Green Arrow page by Doug Mahnke, and a $500 Wonder Woman 2-page lot by Don Heck.

Heritage Sunday: HA received a collection of Sal Buscema pages from Defenders (see below for 2 new auctions), this exceptional page with Silver Surfer, Namor, and The Incredible Hulk went for $4,500 while another very nice page only starring The Sub-Mariner was overlooked and ended at under $600. Other Marvel pieces sold were this Doc Strange page by Gene Colan for $1,200 and a Dracula page for only $650, I was about to bid on that page but the awkward panel layout made me desist… Another Doc Strange by Kevin Nowlan ended at $1,400. I liked this Captain America/Hitler original by Frank Robbins, but it was sold for only $600. A late but nice Andru/Esposito Spiderman page went for $400. DC: a Jim Aparo Aquaman page and an early George Papp Green Arrow original both made $2,600. If you really wanted a cheap Jack Kirby piece $1,200 is pretty good… Strips: $1.900 is the right price for this great On Stage Sunday original By Leonard Starr. A Dick Tracy Sunday from 1953 made $1,700 and a Rudolph Dirks Captain and the Kids $1,400.

Don’t forget that the ComicLink auction (see last week’s newsletter) is ending in a few days! 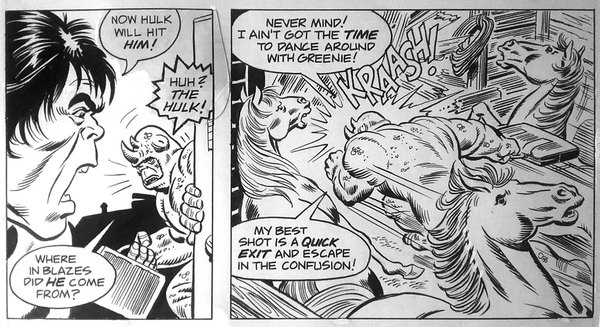 We start as usual by watching a few Chris Samnee Captain America pages: an action DPS, Cap jumping down from a dam, a moody page, another jump… and the last jump.

Let’s see what will happen tonight, somebody is selling a John Romita Sr. page with the Incredible Hulk and Rhino but forgot to mention who the artist is… not many people will see it… will there be a sniping war or not? (if you end up buying it let me know!). Jack Kirby is on eBay again with a Super Powers pencil page,  I like a lot this Jim Starlin Superman page, I even like the brown tone of the faded marker background! A Batman/Robin Don Newton page with a first panel that is perfect for a frame, Batman is also in all of the seven panels of this Dick Dillin original. This Jim Lee JLA page has a fair buy-it-now price and also offers are accepted. Two multi-character pages from George Perez, Teen Titans, and The Avengers and a Swamp Thing page by Bernie Wrightson. A couple of strips, a cheap Johnny Hazard by Frank Robbins and a Mary Perkins by Leonard Starr.

This week we have some big name pieces, never take the Sunday Auction for granted! The regular appearing artists first: Jim Aparo. Don’t ask me why this Spectre page is already at $1,100…  A stunning Aquaman page and one with some big Batman shots. Gene Colan has a Dr. Strange and a very nice Daredevil. For the second week in a row, we have 2  incredible Sal Buscema Namor/Silver Surfer/Hulk pages, one and two. For the Black Panther investors out there there’s this George Tuska original. A Buscema/Williamson page from Wolverine #1. A Superman cover by Rich Buckler, a Flash page by Carmine Infantino, and a rare Angel and the Ape by Bob Oksner. A Joe Orlando Weird Science EC Splash, A Little Orphan Annie Sunday by Harold Gray and a funny Hagar daily by Dik Browne. 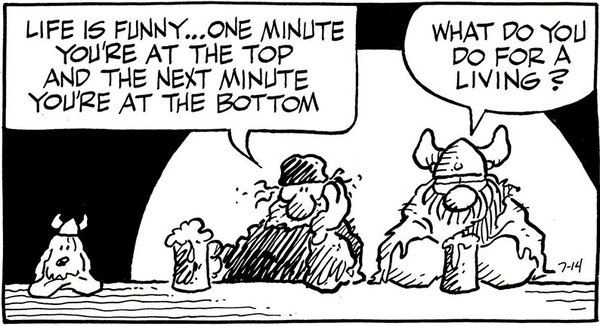 Many nice and cheap strips as usual, some nice Jim Scancarelli Gasoline Alley Sundays from the 80’s, this one has a Dick Tracy and Flattop cameo. Some Gasoline Alley dailies from 1941 by Frank King, an early Broom Hilda daily by Russell Myers and another Dik Browne Hagar daily.

See you next week, when we’ll look at the first Heritage European Auction!