Published on 8 Marzo 2018 by Comicart.tips

Welcome again for this week’s Original Comic Art Tips Newsletter! Remember that tomorrow is the day for the ComicLink Auction, look for my suggestions in today’s newsletter!

eBay Results: I still think that $5.200 is too much for a Jim Lee Commission… it’s a nice piece but with 5k I’d rather buy a great published original by another artist. As expected the two Daredevil pages by Romita Jr. went high at $2.500 and $1.500. The Don Newton Batman Original Art sold for $2.000 and the Dick Dillin World’s Finest splash for $1.900. On Heritage the Tuska Iron-Man #32 page went for $750, as previously said I think this kind of art has great margins of growth, in a few years nobody will be able to buy the Kirbys and the Romitas and Silver Age pieces by less collected artists will go up. It’s rare for a Rip Kirby strip by Raymond without pretty girls to go past the 1k mark, but this one is very good and deserves its $3.100. It’s also rare for a Dennis the Menace panel by Hank Ketcham to sell for less than $500, this was a bargain at $370. At Millon the Marini Scorpion page went for Eur5.500, much less than usual. The little Moebius illustration was a good bet for a fan with a low budget, it ended at Eur1.500. Don’t forget the Mignola sketch ending on Sunday. 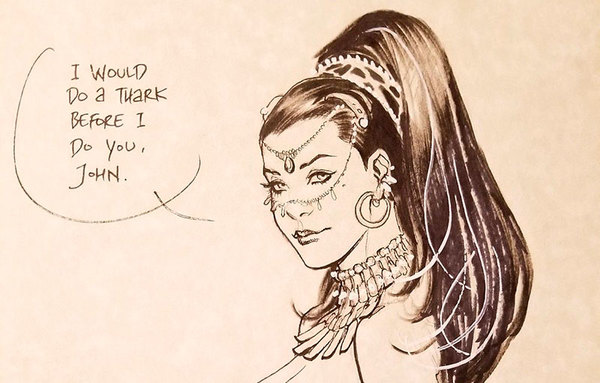 Not many pieces to see this week: a Namor page by Mark Bagley, a Gil Kane Superman half splash original and a nude Dejah Thoris bust by Frank Cho. A John Cassaday early X-Men page and a rarely seen Larry Stroman X-Factor page.

As you’re expecting we start for the last time the Sunday Auction Original Art section with a Neal Adams Batman Tower Records page. This is #20/20 with Batman, Robin, The Joker and the Batmobile. very very nice. Then look at this beautifully drawn Aquaman #52 page by Jim Aparo, very well drawn is also this Metal Men original from Wednesday Comics by Jose Luis Garcia-Lopez and Kevin Nowlan. A little modern classic is this Lobo #3 page by Keith Giffen and Simon Bisley and before going into Marvel Comics territory look at this Birds of Prey cover by Butch Guice. Starting from the older piece we have a Sub-Mariner #41 page by George Tuska, a Daredevil/Black Widow original by Gene Colan, a John Buscema page with Conan, Valeria and a giant spider and a Spiderwoman commission by Frank Cho.

A Charlie Adlard Walking Dead action page, then in the Comic Strip section this week we have a rare Sky Masters daily by Jack Kirby and Wally Wood, a Tales of the Green Berets by Joe Kubert and a funny Beetle Bailey sunday original from 1968 by the late Mort Walker. 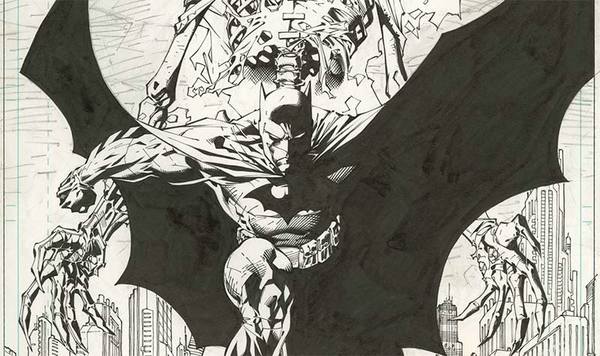 Many, many great pieces in this auction, the most important is from DC, Batman #618 cover original art by Jim Lee, the best cover from the Batman – Hush storyline. Be prepared for an X-Men centric auction with many classics like this Jim Lee page from UXM #274. I know there are many Neal Adams fans on this newsletter, here’s a Green Lantern page! A Dark Knight III Batman original by Andy Kubert, page #1 from issue #1 and a Batman DK Strikes Again page by Frank Miller. The best Kubert piece BTW is this X-Men #24 cover. A Batman cover advertised as the 4th ever appearance of Harley Quinn is getting a lot of bids, a lovely Zatanna pinup by Darwin Cooke and a Batman DPS by David Finch. Another Batman cover, this time a Kelley Jones classic. Batman: The Long Halloween-Tim Sale-DPS. Nuff said. Marvel: as usual A is for Art Adams with a Fantastic Four/Spiderman page, see also a Andru/Romita Spiderman Original Art. Romita has the greatest Marvel masterpiece, a Spiderman pinup with friends and foes. Many Buscema pages, the cover to Thor #192, Sub-Mariner #1 page 9 (a real classic piece), a page with the Fantastic 4 and Silver Surfer Vs. Galactus and a Conan splash with incredible inking by Alcala. Sal Buscema has a Spiderman/X-Men splash. John Byrne is here with a Uncanny X-Men #142 page, speaking of the X-Men look at this Wolverine painted commission by Travis Charest. An incredible piece is this Hulk Vs. Wolverine wraparound cover by Dale Keown, who’s here also with many Pitt splashes, this is the best in my opinion. a Spiderman Vs. Ghost Rider cover by Sam Kieth and a Spiderwoman cover by Frank Cho. Jack Kirby: Black Panther #12 cover (!) and a Thor half splash. Todd McFarlane has a Spiderman # 12 splash and several Spawn pieces over Greg Capullo (one here). I can’t think of a better Jim Starlin page. To close the Marvel section with a bang here’s one of the most important Mike Ploog pieces, the cover to Giant Size Man-Thing #1 and a Elektra Assassin era cover by Bill Sienkiewicz.

Quick non Marvel/DC update with the splash to The Walking Dead #24, a Mr. Natural Strip by Crumb, a Frazetta John Carter illustration, a painted Adam Hughes cover and a moody Mignola Hellboy original. 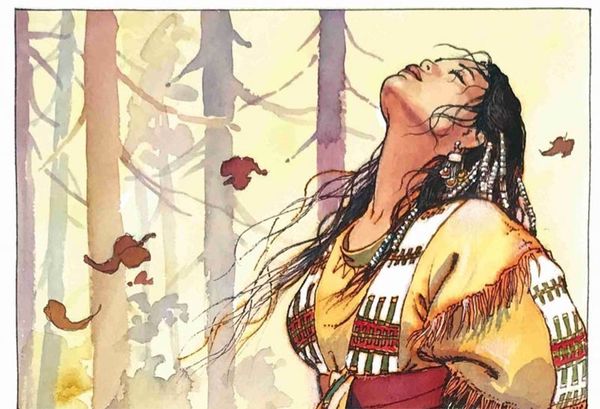 The 50th Auction from Little Nemo has some interesting pieces. the cover piece is this Milo Manara Illustration. A classic Micheluzzi cover and a Mignola Dracula page. A beautifully painted Sergio Toppi illustration and a Schulz Peanuts strip with Snoopy. A Valentina illustration by Crepax and three superhero pieces: Frank Miller from The Dark Knight II, an Avengers painted preliminary by Simone Bianchi and a Justice League full team DPS by Ed Benes.

See you next week with Original Comic Art Tips, we’ll look at Hakes Auction ending March 15th and all the usual great art!