Published on 26 Giugno 2020 by Comicart.tips

The hit wasn’t a Jim sketch, but the Walt Simonson Thor illustration, sold for more than $21k.

The Jim Lee Hush page was sold for $4,4k, a recreation of a Batman page inked by Danny Miki over Jim Lee printed bluelines sold for $1,6k, curious to know if the buyer understood what he was buying…

Remember the Cable cover by Rob Liefeld sold on eBay in January for $4,5k and put for sale again for $17k after 2 days? (I wrote about it a few months ago on the blog) It was only a matter of waiting for the old auction page to expire, it was sold for a $10k Best Offer. what can I say… that’s why prices continue to go up.

In the meantime the unused vintage New Mutants cover by Rob went for $9,5k.

Catawiki: the color illustration by Giorgio Cavazzano went for €1k, the Paperinik splash for €600, the cover prelim for €100. The Paperinik cover by G.B. Carpi for €900, the Romano Scarpa strip for 200.

Heritage Weekly Auction: The Batman splash by Tim Sale went for $5,2k, it will go up. The Jaguar splash by Steve Ditko for $3,7k, the Namor splash by Jim Mooney for $2,8k, the Doonesbury strip for $2,6k.

The page by Sergio Toppi went for $1,7k, more or less its price. The Batman splash by Gary Frank for $1,4, the Hellcat and Avengers page by Norm Breyfogle for only $240, the Namor vs Thing page by Greg Land for $130.

Nate Sanders: big prices for Peanuts original art, the Charlie/Snoopy one ended for $25k, the Snoopy daily for $21k, the water damaged daily for $14k.

A charity auction for UK comic book stores, a great Phoenix by Alan Davis and a Marvelman, a nice and very rare Venom pinup by Giuseppe Camuncoli, a Batman pinup by Jock, a color Hulk bust by Gabriele Dell’Otto and some more.

I like a lot this Dracula page by Don Perlin.

Some Archie covers and pages by Dan De Carlo, two Jaguar pages by Steve Ditko, a Ruse cover by Butch Guice and a Ghita page by Frank Thorne. 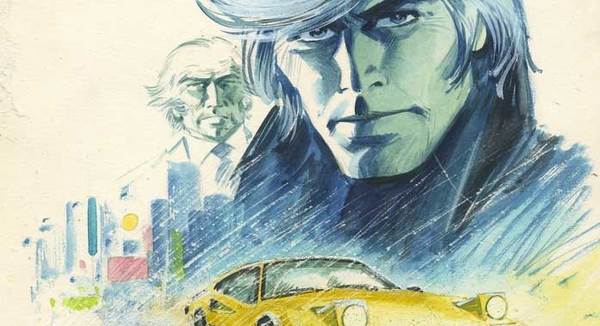 The estimation for this Asterix page by Uderzo, without the main characters, is the half of the usual €150k. Many Vance pieces, including this painted Bruno Brazil cover, many Moebius illustrations, I like this self portrait, never seen so many Tardi originals at the same time, here’s a Burma page.

Then original art with a model sheet by Alessandro Barbucci, some nice Dany illustrations, many Talon pages by Greg, a nice Blacksad commission by Guarnido and a Ric Hochet page by Tibet.

See you next week!! Next time we’ll look into July’s Heritage Signature Auction…