Published on 1 Maggio 2020 by Comicart.tips

Welcome to #135 of Original Comic Art Tips! Another Charity auctions tour de force, followed by many other things…

eBay: the Captain Harlock sketch by Leiji Matsumoto was sold for €7.000, all going to a hospital in Turin.

A nice #24, Cyborg, sold for $4,1k (and that now looks like a bargain), then you have to see the incredible #25, The Joker, sold for $14,5k… it is now one of my favorite pieces Jim Lee has drawn since leaving the X-Men (90’s Marvel kid here). I like the new fine line crosshatch style he’s developing.

I don’t remember painted pieces by Art Adams before this Death illustration, sold for $20,1k… the first artist to go over the $20k mark, even before Jim Lee (and with a character he’s not known for, which doubled last week’s Wolverine drawing).

The Hellboy sketch by Mike Mignola went for $1,4k, the Spongebob for $1k.

The Signed Calvin & Hobbes print went for more than $10k, the C&H sketch by Patrick McDonnell for $4,2k, the Bear sketch by Bill Sienkiewicz went for $1,1k.

Non Charity: the X-Force title splash by Mark Pacella went for $1,4k, a Cyberfrog DPS by Ethan VanSciver was sold for $1,3k by his old pal Trent Kaniuga, an Omega Men splash by Keith Giffen for $3,6k, a great Love&Rockets page by Beto Hernandez went for $1,1k.

Jim Lee original art auctions: A nice portrait of Atrocitus in #26/60 (ending today), not a headsketch is #27, a full illustration of Swamp Thing, then an inkwashed Lobo pinup by Doug Mahnke and a cover quality Gotham Sirens pinup by Tony Daniel.

Non Charity auctions: we start with Jim Lee…! and with an early Batman study.

A nice Batman commission by Rafael Albuquerque, one by Angel Medina, and a Joker by Chris Samnee.

A Superman splash by Carmine Infantino, Wonder Woman by Don Heck, the Demon by John Byrne and Doomsday by Gary Frank.

A Superman cover by Alex Saviuk, Superman art by Curt Swan, a collage by Jack Kirby and a Transmetropolitan cover by Jaime Hernandez.

A Nightstalkers cover by Ron Garney, an X-Men page by Whilce Portacio and three Fantastic Four pages by Paul Ryan.

A Superfan cover by Jack Davis, a painted cover by Mike Kaluta, Odkin by Wally Wood, a Palookaville page layout by Seth, a Duplex Planet page by Dave Cooper.

As usual I’ll be highlighting the best pieces, but if you’re searching for cheap $100-500 pages there’s plenty to see.

A Hulk page by Joe Bennett, a cover quality Spidey Vs Venom commission by Mark Bagley, a Superman/Batman pinup by Neal Adams, a 1994 Superman illustration by Dan Jurgens, Warlord original art by Mike Grell, a Spidey Vs Avengers splash by Mike Deodato, a nice Spidey page by Alex Saviuk. 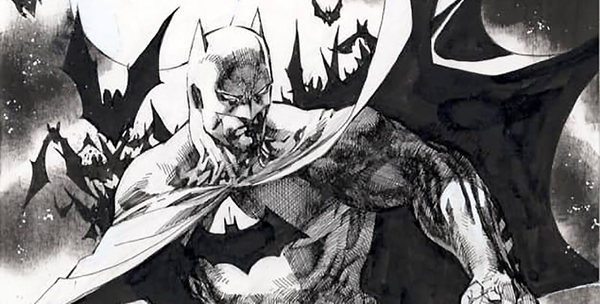 Do you already miss looking at Jim Lee original art? I saved the best piece for the end.

Jim has drawn what everybody was expecting for his 60 auctions, a regular Batman image, for another charity drive. This one is pretty good…

Vermot & Associés is doing a comics/statues/original art auction, there’s not much to see despite having 6 pages of original art… here’s a generic link if you want to explore.

It’s yesterday news that the family of Albert Uderzo is auctioning 5 pages of original art for charity to French hospitals. 3 beautiful Asterix pages (from the nineties but with most of the village cast), a Tanguy & Laverdure and an Oumpa-Pah. They’ll be auctioned by Artcurial on May 26 and will probably raise at least €400.000. 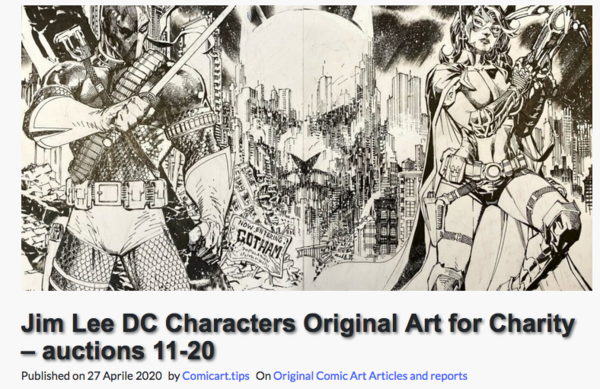 And if you’re not tired yet of reading about DC Comics’ Publisher I wrote the second blog post on auctions 11-20, there are also two interesting charts comparing results.