Published on 24 Aprile 2020 by Comicart.tips

Other artists auctioned by Jim’s account were: Doom ($4,7k, a bargain) by Art Adams, Swamp Thing ($1,5k) and Green Lantern ($1,4k) by Bryan Hitch, an incredible Wolverine Vs Venom by Sam Kieth went for $8,4k, a great Cap by Ron Garney went for $3k.

Hey somebody sold on ebay a Conan page by Barry Smith for $7,2k, the Frazetta sketch went for $3,3k.

Heritage Weekly Auction: The Blacksad pinup by Guarnido went for $3,1k, I don’t know if it’s a published piece, but commissioning one like this would cost much less. A Captain America page by Ron Lim went for $2,3k, a Spider-Man page by Alex Saviuk went for $500, they sell better on ebay.

We start again with Charity art auctions. Who can have more ebay watchers than Jim Lee? It’s J. Scott Campbell, who made a Zatanna piece with the exact same quality he would do for a cover. He wins with 515 watchers to the 410 of this Batman by Gaslight illustration by Jim Lee, #20 of 60.

Jim announced that he’ll do only (detailed) head sketches for #21-40 and then maybe do more for #41-60. Bet it was really stressing for him to pencil and ink a cover every day for 20 days… I can understand that.

So #21 is a really nice portrait of Batman villain Zsasz. Then we have Spidey by Jim Cheung and Aquaman by Ivan Reis.

Very rare is this Captain Harlock sketch by Leiji Matsumoto, he was hospitalized during a signing tour in Italy last year, and as a thank you he sent this piece to be auctioned to help the hospital during the pandemic. Ending tomorrow and already at $4,5k.

I’d really like to own Spongebob drawn by Mike Mignola, then there’s Sandy, Squidworth and an Hellboy bust.

Regular auctions: Marvel. the title splash to X-Force #12 by Mark Pacella, a Captain America splash by Dan Jurgens, a Spidey page by Ron Frenz, a Spidey splash by Lan Medina.

Batman original art: studies by Alan Davis, a cover quality illustration by Steve Epting, a DPS by Doug Mahnke, a color illustration by Aaron Lopresti, an early pinup by Adam Hughes, a splash by Cam Kennedy.

A to Z, one piece per artist (many have several worth seeing): the most important illustration are these Frankenstein endpapers by Bernie Wrightson.

After the $25k ebay auction for a Wolverine cover by Adam Kubert, wolvie pages are coming for sale more often, here’s a DPS.

A huge 2000 AD poster by Dave Gibbons, an X-Men page by Dave Cockrum, an EC splash by Graham Ingels. Hey, a Superman splash by Sprang/Burnley.

Title splash from Avengers #36 by Don Heck, the Dark Knight original art by Frank Miller, a page from Fantastic Four #32 by Kirby, a Batman page by Jim Lee, Gwen Stacy by John Buscema, the splash to Spidey #41 by John Romita.

Ghost Rider art by Ploog, a Spidey splash by Mike Zeck, Superman/Batman by Lee Bermejo, a Spidey DPS by Todd McFarlane, the title splash to Daredevil #5 by Wally Wood, Spidey by Ross Andru.

A Doc Ock page by Ditko, a Batman/Catwoman page by Tim Sale. 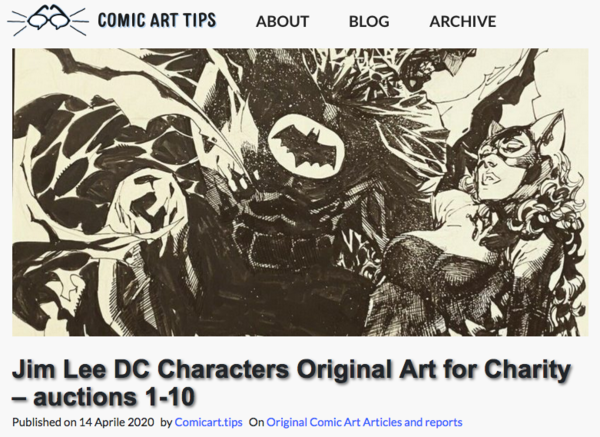 A look at the first 10 original art auctions for charity by Jim Lee, I also made a price chart that I’ll be updating every 10 pieces sold.