Not much is happening this week for original comic art collectors, a few nice pieces are still going for sale.

Heritage Weekly: Many high results, a Superboy page by Dave Cockrum went for $5,7k, the Garcia Lopez DC illustration for $5,2k, the Daredevil splash by Joe Quesada for $3,5k, a Spidey page by Sal Buscema for $3,3k, a Warlord by Mike Grell for $2,6k. The New Mutants page by Rob Liefeld went for $2,6, interest in early RL pages is really going up lately, even a page with nothing going on sells for such a high price.

I’ve owned this Mike Wieringo cover, paid the incredible sum of $75 for it in 1997, sold it 10 years later when my Wieringo collection started to get too big, now I see somebody paid $1k for it.

Plenty of bargain pieces also, Tuska Iron-Man pages are still very affordable, a Wolverine splash by Lee Weeks sold for $350, a nice X-page by Rick Leonardi for $300, a Deadpool commission by Chris Bachalo for only $250, a Blue Beetle page by Gil Kane went for $180.

A Spawn page by Capullo/McFarlane, a Youngblood DPS by Rob Liefeld, a B.C. Sunday strip and a Wizard of ID daily. 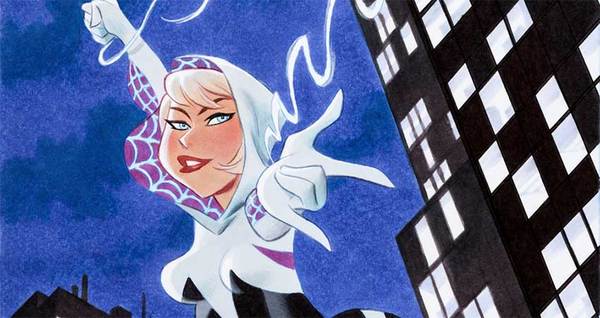 A Spider-Gwen cover by Bruce Timm, a Captain Marvel by Joe Jusko, an Avengers cover by Jerome Opena, an X-Men page by John Cassaday, a Namor pinup by Alex Ross.

See you Next Week!