Welcome to #128 of Original Comic Art Tips, the world has stopped, this week, but in the virtual world of online auctions nothing changed, we have some very interesting results, new art and a new blog post..!

eBay: a big Batman/Ivy painting by Lucio Parrillo was sold for a Best Offer of $3k, a nice Hulk page by Todd Mcfarlane went for a B.O. of $7k, Spawn original art by Capullo and McF. went for $1,9k, the X-Force prelims by Rob Liefeld were sold for $2,5k.

Byrne: the Avengers page by Ditko/Byrne was sold for $2k after ending with no offers the first time. The Fantastic 4 page went for $1,600.

I should show this listing to those who every day buy photocopies for $300 advertised as “production art”, this is what a real production piece looks like, the cover to Dracula #1 by Neal Adams that was extended before publication. That said, I’d use the $2k (Best Offer) to buy original art…

Great week for the Heritage Weekly Auction, with 40+ items sold for over $1k. The highlights are the Paul Gulacy pinup sold for $6,5k, a Superboy page by Dave Cockrum for more than $4k, the Darkseid illustration by Jack Kirby for $4k.

A Dick Tracy daily went for $3k, a Green Berets by Kubert for $1,400. If you want to see the other high prices here’s a handy link.

Heritage Signature: I’m afraid we’ve already seen the most interesting results last week, what’s left are a record price for an Andy Kubert X-Men page, sold for $6k. A great page, they went for $2k until a couple years ago. Another record for an Adam Hughes cover, sold for $13k, you probably remember the Catwoman cover sold on ComicLink for $18k. An interior X-Men page by Jim Lee makes $24k, the debut on Heritage for Stanley Lau, with a Batman cover sold for $12k. A Tarzan page by Burne Hogarth went for a relatively low $9,5k. 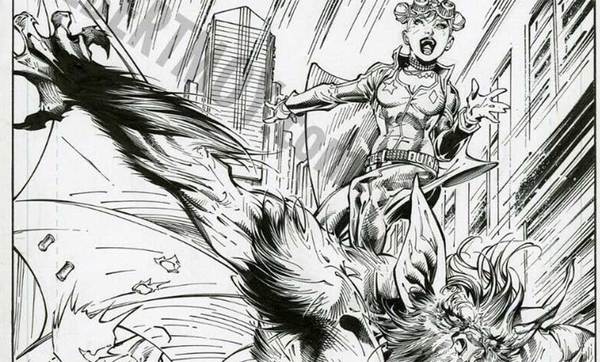 DC: an Harley Quinn splash by Jim Lee, an Hawk & Dove splash by Rob Liefeld, a Wonder Woman page by Daniel Warren Johnson, a Batman commission by Mark Buckingham, a Supergirl commission by Bob Layton and a Joker by Garcia Lopez.

A cover prelim by Steve Rude, a modern Batman page by Jim Aparo and an Infantino/Perez page.

Marvel: the price is high but look at this Illustration by John Buscema, a Fantastic Four page by Rich Buckler, nice Man-Thing by Don Perlin, Iron-Man by Luke McDonnell, a Godzilla page by Herb Trimpe.

A TMNT cover prelim and a page by Kevin Eastman, a small Baltimore spot by Mike Mignola.

Strips: I like this Wizard of ID Sunday, a Tumbleweeds Sunday and a B.C. daily.

A page of preliminary sketches by Wally Wood for Daredevil #6

I like this cover by Mike Allred, a Madman pinup, an Heavy Metal page by Simon Bisley, a Love & Rockets back cover by Jaime.

Among the usual strips there are a nice Tarzan by Bob Lubbers and a Buz Sawyer daily by Roy Crane.

Many low priced pieces and a few highlights: a Thorgal page by Rosinsky, a Blandy illustration by Delaby, some Talon pages by Greg, a Wonder Woman pinup by Marini, a SkyDoll pinup by Barbucci and some quick and cheap Blueberry sketches by Giraud.

As it happened last month I made a PDF containing the 70+ most interesting results for comic art sold on ComicLink last week. This time I had a hard time squeezing everything in the list, the document started with 150+ pages.

The password for opening the PDF is the same we used last month:

This is an exclusive bonus for Comic Art Tips subscribers, save the password, I’ll delete it from the online version in a couple days!