Published on 6 Marzo 2020 by Comicart.tips

Here we are with #127 of Original Comic Art Tips! Many interesting results and a very long (and great) ebay section!

A classic TMNT page by Eastman/Laird went for $850, a nice Spidey page by Ron Lim went for less than $200… good catch.

Heritage Signature Platinum Night: lots started to end yesterday with the best pieces, take an eye on auctions ending today and tomorrow. The winner is John Romita with the Amazing Spider-Man #51 cover sold for $312k, an historic cover but not the perfect display piece, traditionally art with the character being beaten up go for less, so this price probably represents another jump in prices for JRSR. Romita also takes the bronze medal for the Hero for Hire #1 cover sold for $156k. 5th place for the Amazing #71 cover sold for $85k.

No surprises for the Little Nemo Sunday strip sold for $168k, which represents an Heritage record. No surprises again for the Calvin & Hobbes daily, record price for a daily at $102k but not a big jump up, considering that this strip was also hand colored (the last time a daily was sold in 2018 it went for $95k).

The Ditko Spidey original went for $66k, high but not as high as expected. The same can be said about the Iron-Man cover by Gene Colan sold for $65k, Ross Andru makes his record for the Superman/Spidey splash sold for $60k, record also for Frank Brunner, $50k for a Doctor Strange cover. Nobody expected this Spidey cover by Erik Larsen to NOT make a record, but it even goes beyond that at $50k.

$48k for an X-Men original page by John Byrne, $45k is the highest price paid for interior art by Bernie Wrightson on HA, the New Mutants cover by Sienk makes $45k too. Big jump up for Dale Keown original art, this Hulk cover makes $33k despite being far from the best cover in his run. Let’s see what will happen when a great cover will go for sale.

The first appearance of Judge Dredd made $90k last November, the second makes much less, ending at $18k.

Heritage Weekly: the exact opposite of last week’s results, when I couldn’t decide what to highlight between dozens of high prices. Not much happened. The winner is Dick Ayers with his Sgt. Fury page sold for $2,600, an original Batman page by Frank Quitely sold for $2,000, a Wally Wood illustration sold for $1,500, a 1949 Nancy daily and a Batman prelim by Alex Ross both went for $850, a Marmaduke panel went for a surprising $550.

Heritage Comic Strip Auction: not much to say, highest prices were for original art by Foster, Gottfredson, Segar, McCay… then dozens of very well drawn but less known pieces gone for low prices.

Comiclink: just a quick report of the highest prices, I’ll do a blog post next week. The record price is for Adam Hughes, with a Catwoman/Zatanna cover sold for almost $18k, auction record for Jae Lee, his Superman/Batman #1 cover was sold for $5,500. The highest price is for John Romita Sr, the Spidey #365 cover was sold for 44k, then Frank Miller, with his Spidey cover sold for $26k, the Judge Dredd cover by Brian Bolland went for $17k, the Fantastic Four original page by Jack Kirby west for $13k.

Let’s save the price for the Battlechasers page by Joe Mad sold for $3k as a future reminder.

Two Amazing Spider-Man complete issues by John Romita Jr. were sold, #40 for $14k, I did a quick sum of the single page values and came up with $25k… #55 was sold for $4,6k, I think that $4-5k could be the price for the splash alone, I don’t know, there’s no way to know if this lot had a reserve that was not reached…

DC: the best piece of the week is this published New Frontier illustration by Darwin Cooke, the price is high but right.

I like a lot these two pages by Garcia Lopez, Teen Titans and Deadman.

A Shazam sketch by Alex Ross, a Catwoman pinup by Tim Sale, it’s the first time I use the ComicLink PDF I posted on the website last week… this Adam Hughes Mary Marvel pinup was sold last month for $340 and is now for sale again at $1,200…

Marvel has great comic art too, this week: a Conan illustration by Ernie Chan, Spidey by Mark Bagley, a Howard the Duck cover by Kyle Baker, an Avengers cover prelim by Alan Davis, a Red Skull cover by Joe Quesada.

John Byrne: an Avengers page, an Incredible Hulk page, a Fantastic Four page still at $200 and I really like this, probably cheap, Peter Parker page.

A pinup by Jaime Hernandez, a Creepy page by Wally Wood, look at this illustration by Basil Gogos.

Strips: a Katzenjammer kids Sunday by Knerr, a Popeye Sunday by Sagendorf, a B.C. Sunday and a Wizard of ID daily. 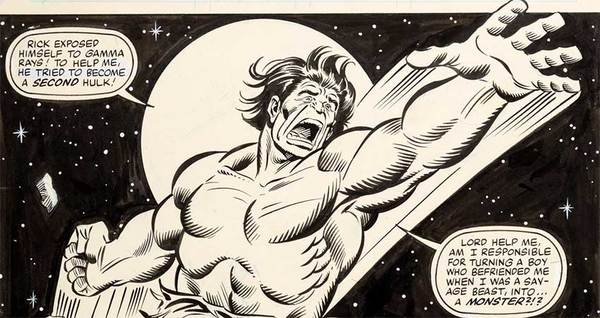 The most important piece is this rare original The Imps Sunday strip by Winsor McCay, a Krazy Kat daily, a rare Bela Zaboly Popeye daily. Not original art but a signed Calvin & Hobbes print by Bill Watterson.

See you next week! Lots of new things to see!!!