Published on 10 Gennaio 2020 by Comicart.tips

Welcome to #119 of original Comic Art Tips!! We’ll soon start looking into ComicLink‘s and Heritage Signature auctions, for this week we’ll again look only into eBay and Heritage Weekly lots.

eBay: there will be no surprises at the end of the year for the highest price paid for comic art in 2020. The Wolverine wraparound cover by Adam Kubert went for $25k, a rarely matched price for original art on eBay.

The Batman page by John Romita Jr. was not that exciting, but paying less than $400 for full figures of Batman, Catwoman, the Joker and the Riddler must be pretty exciting for the buyer.

The World of Krypton DPS by Mike Mignola went for $1,000, the Avengers page by Chris Bachalo for $500 and the ugly, fake Vampirella by “Manara” was sold for a nice $1, which means that the forger spent time for drawing, listing on eBay and now will have to pack the drawing and go to the post office for a dollar. Not a smart move. 😸

Heritage Sunday: the winner is George Perez with an Infinity Gauntlet page sold for almost $10k. Still it remained inside usual prices for this kind of original art. The Superman/Shazam splash by Rich Buckler went for more than $3k, the Alter Ego cover by Kane/Severin went for $2,700, a Curt Swan Superman page went for $2,800. The two early Dick Tracy strips both went for $2,600, the Darkseid splash by Mike Mignola for the same price.

Just a few weeks ago I wrote about post 2000 Garfield dailies dropping in prices from $1/1,5k to $500 and less. I thought it was a matter of saturation, selling the entire archive of strips week after week. Now prices began to rise again, so if you bought a strip in October/December consider yourself lucky, as this 2007 strip, sold last Sunday for $1,380, is no different (and even less funny to me) from this strip sold in November for $396! 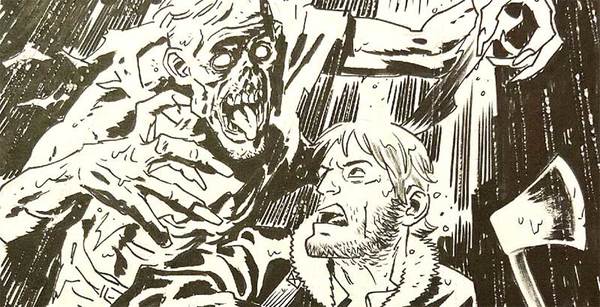 Marvel: everybody’s watching this X-Men original page by Jim Lee priced at $90,000, the real value is between $9k to $15k, even more if you value swimsuit art more than action pages (I don’t). The seller is probably trying to market to a wide audience his piece, to reach the really interested buyers.

A Sif pinup and a Fantastic Four page by Paul Ryan, a Thor splash by Tom Grummett, an Avengers page by Olivier Coipel and a Wasp prelim by Alex Ross.

DC: many heroes in this Doomsday Clock page by Gary Frank, a Big Barda page by Jack Kirby, Krypton pages one and two by Mignola, this Curt Swan Superman/He-Man page is going up.

A Batman pinup by Jason Fabok, a Bane commission by Dale Keown, some Aquaman pages by Lan Medina.

A TMNT illustration by Kevin Eastman, a discounted 100 Bullets page by Eduardo Risso. I really like this Walking Dead illustration by Chris Samnee, and it started from $1.

I found this press release on HA‘s website: “Steady growth and the opportunity to reach a wider audience have prompted Heritage Auctions to change the format of its weekly comics, animation and art online auctions into two-day events. Under the new format, comic books will be offered on Sunday in each week’s sale. Everything else, including original art, animation art and video games, will be offered on Monday. The new format will allow auction sessions to finish earlier, a benefit that will be particularly appealing to collectors in later time zones.”

Now it’s not the Sunday auction anymore, and Monday auction is not correct, so I’ll start calling it “Weekly” auction, just remember that the comic art lots will end on Monday.

I like this Hulk page by Sal Buscema, Hulk’s back by Herb Trimpe, the return of Dick Ayers’ Sgt. Fury pages, and a splash of the original Ghost Rider.

Cartoon storyboards are a cheaper way to buy original Fantastic Four art by Jack Kirby, they usually go for 1/10 of comic book pages.

Not much from DC. A rare Catwoman page by Jim Balent, another Swamp Thing illustration by Alfredo Alcala, a great Superfriends title splash by Ramona Fradon and Superman dancing by Irv Novick.

Strips: great and rare Miss Lace painting by Milton Caniff, a signed Odd fact by Will Eisner, a Pogo daily, a nice Star Wars daily by Russ Manning and a Garfield daily.