Published on 20 Dicembre 2019 by Comicart.tips

Welcome to #116 of Original Comic Art Tips!! websites are slowing down but there are still many interesting pieces to see, and in January we’ll start again with some big auctions..!

Heritage Sunday: the highest prices were made by the early strips by George McManus, a Newlyweds Sunday went for $3,500. A Dick Tracy 1945 daily went for $1,700. The two Ranxerox pinups by Tanino Liberatore went for $2,600.

Happy collectors took home a nice Green Goblin page by Humberto Ramos for $150, a Superman cover by Ryan Sook for $800, that nice Wonder Woman prelim for $150 and a finished Aquaman pinup for only $87.

Millon: some really high results, the winner is Tardi with the cover to the first Adèle Blanc-Sec album, sold for €100k, a Gaston page by Franquin for €54k and a Spirou page for €50k.

A Oumpah-Pah page by Uderzo for €44k, a Valerian cover for €31k, a Lucky Luke illustration for €24k, a Jerry Spring cover by Jijé for €24k and a 1991 baseball themed Peanuts strip for €8,2k, it’s rare these days to find one for that price.

Marvel: a great Hawkman & Cloak splash by Olivier Coipel, if you like Rob Liefeld there’s a Captain America splash from Heroes Reborn Avengers #1. A very nice X-Men action page by Andy Kubert, and the price in 2020 money is quite good.

A Paul Pope Spidey page, a Guardians of the Galaxy splash by Ed McGuinness, a classic Mysterio/Hobgoblin page by Erik Larsen and a Spider-Woman. A Cap half-splash by Dan Jurgens, a $75 Punisher sketch by Jim Lee, Ultimate Spider-Man original art by Mark Bagley.

A Power Girl sketch by Adam Hughes, a Wonder Woman commission by David Finch, an Atom prelim by Gil Kane, Superman Original art by Curt Swan, no superheroes but great art in this Wonder Woman page by Kevin Nowlan.

DC: the best piece is this Swamp Thing page by Veitch/Alcala, a nice Metamorpho cover recreation by Fradon/Giella and an Aquaman pinup by Fradon, Superman by Swan/Anderson, a Wonder Woman page by Bob Brown and one by Jose Delbo.

Strips: a Mutts print with a painted remark by McDonnell, a Ben Casey daily by Neal Adams, a great 3G Sunday by Alex Kotzky, a Steve Canyon 1952 daily, 2 lovely On Stage dailies (one, two), a perfect Wizard of ID Sunday, a 1944 Blondie Sunday and a funny Garfield daily. 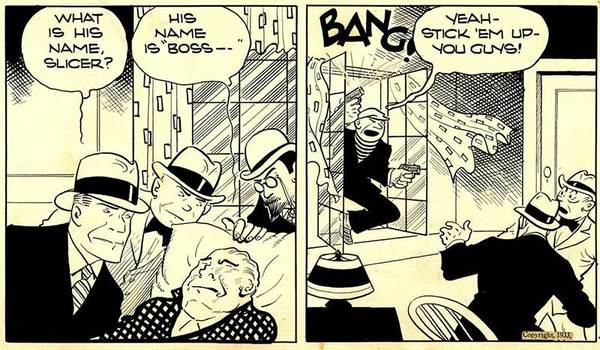 The usual dozens of cheap strips, but this time there are also a few very nice pieces. A very early (1933) daily Dick Tracy Strip by Chester Gould, and it’s also an action scene. 9 consecutive 1951 dailies with the birth of Tracy’s daughter, a nice 1947 daily.

see you next week, and happy holidays!!