Published on 29 Novembre 2019 by Comicart.tips

Welcome to #113 of Original Comic Art Tips!! Many auction results to see.

eBay: The winner is Gene Colan with his Howard the Duck cover sold for $12k, a Kirby Fantastic Four page went for $8k, the Thor page for $5,6k, the Monsters O.T.P. cover for $2,7k.

Iron-Man original art by Gene Colan sold for $4,6k, the John Buscema Wolverine splash for $2,4k, Spidey by Ross Andru made $2,7k, X-Men by Don Heck for $3,1k, a bust of The Shadow by Steranko for $2,5k, a Magneto Trading Card painting by Marc Sasso for $3,6k, A Simon Bisley painted cover sold for a Best offer of $2,5k, a Doomsday Clock by Gary Frank went for $3k.

Chris Samnee Batman sketches: I’m happy that this Commissioner Gordon sketch was the highest price at $750, usually great pieces without Batman get overlooked. This one made $700, this one was nice and pretty affordable at $250.

Heritage Signature Auction: the auction winner is Robert Crumb, with one of his classic pieces, sold for $690k. I was sure the winner would be Neal Adams with his Batman cover, it still is his personal record at $600k.

Jack Kirby makes his personal Heritage record for original art with the Cap cover and the Dr Doom, splash each sold for $288k. The Doom origin page is the 4th price ever with $180k, and some other pieces enter in the top ten.

We are now used to see Killing Joke pages by Bolland going over $100k. The iconic Spectacular Spidey cover by John Byrne made $90k, the same price was made by Mick McMahon with the first appearance of Dredd. Starlin makes another record price with one of his most iconic covers.

Heritage Sunday: the Greg Capullo Spawn page was sold for $2,000, until 3-5 years ago Buscema/Sienk pages from the Galactus mini were the entry point for JB original art, they now go for $2,000. A Batman page by Eduardo Risso went for $1,900, the other one for only $500.

The Batman Who Laughs page by Jock went for $1,400, the nice JLA page by Don Heck for only $550 and the nice Spidey prelim by Frank Cho for only $300. A Wizard of ID Sunday went for $1,200, almost three times their usual price.

Christies/Huberty & Breyne: They posted a commentary on the auction, making half of the job for me themselves. I edited a Google Translation from French and added links to the art.

The classics have aroused great interest from international collectors from 17 countries. Besides Hergé, let us remember the prices realized for Uderzo, including ”Asterix, The rose and the sword“ sold € 118,750 (lot 230) but also for Peyo, Martin or Franquin whose illustrated Trombone was sold for € 68,750 (lot 169). Finally, 100% of the works of the master of eroticism, Milo Manara, were sold, realizing a total of 210,250 euros.”

I’ll add to this a few other links: Giraud, with a Blueberry page sold for €52k, a Lucky Luke illustration by Morris sold for €15,000, another Gaston page by Franquin sold for €68k, a Bilal page for €47k and a Jesuit Joe page by Pratt sold for €22k. 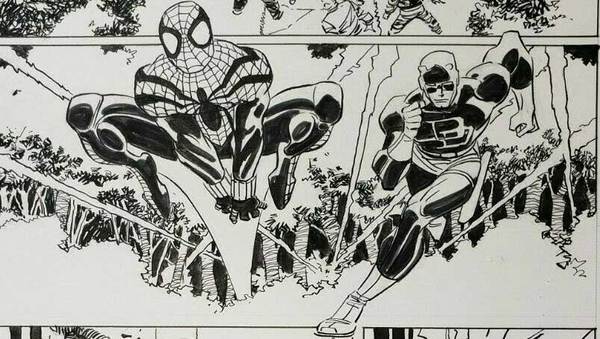 A Zatanna pinup by Artgerm, a quick but nice Wonder Woman sketch by Darwin Cooke, a Young Justice cover by Chris Jones and a double Batman/Catwoman sketch by Adam Hughes.

Marvel: the best piece is this Spider-Man/Daredevil page by John Romita Jr., the price is ok if you can bring it down a little. Young Namor by John Byrne, a beautiful Kull splash by Hannigan/Alcala, a Spidey page by Alex Saviuk, a Punisher splash by Joe Bennett, a nice New Mutants page by June Brigman.

A Sabretooth cover by Ariel Olivetti, a Punisher commission by Goran Parlov, a Namor cover by Butch Guice.

The price is insane, but there’s a page from Preacher #1.

A page from The Maxx by Sam Kieth, a Vampirella commission by Paul Smith, a nice Hellboy commission by Dave Johnson, a Black Kiss pinup by Chaykin, a 1989 Groo commission by Sergio Aragones.

DC: a big lot of Tony Harris’ Starman pages. A painted cover from #53, another from #81, an 8-page story and an interior page with Starman and the JLA.

A Superman splash by Ross Andru, great Deadman page by Garcia Lopez, the Atom by George Perez and a beautiful Batgirl pinup by Kevin Nowlan.

A Dr. Doom origin page by Mike Mignola, Two in One by Ron Wilson, a Dr. Strange pinup by Mark Texeira and an unpublished X-Men cover by Humberto Ramos with a fat Colossus… don’t ask me why. 😅

A Wildstorm DPS by Barry Smith, a Witzend page by Wally Wood, a pinup by Mike Mignola, Love & Rockets original art by Jaime, a Mars Attacks cover by Dave Sim and a Carl Barks prelim.

A Dennis the Menace panel, a Doonesbury daily, and I found this B.C. Sunday funny.

Little Nemo is having an interesting auction, half of the lots are pages where books appear: characters reading, or in a library, some even reading comics. I chose this Sergio Toppi illustration for this section.

Two other historic Toppi pieces, a Sgt. Kirk cover and an illustration from L’Uomo del Nilo.

A color Sgt. Kirk cover also by Hugo Pratt, a title splash by Micheluzzi, a Druuna page by Serpieri and dozens more.