Published on 21 Novembre 2019 by Comicart.tips

Welcome to #112 of Original Comic Art Tips! Lots of things to see…

eBay: the vintage Marvel pages from last week are still going, Chris Samnee Batman pinups: this week prices were lower on average, the best one made $1,000, this one was nice and more affordable at $425.

Heritage Sunday: Interesting. The Wonder Woman illustration by Bruce Timm went for $5,500, it was already sold in last August’s Signature Auction for $4,300. The art itself had a 25% growth in value in less than 3 months, but the seller, considering buyer’s/seller’s premium, actually lost a big sum of money on it…

With an added background this last one could go up of at least $2k. The owner of this commission sold in 2015 for $1,600 should be very happy.

Nice Namor pages by John Byrne are still affordable at $660, a Batman fight page by Bob Brown and a nice World’s Finest by Dick Dillin both went for $380, a Namor page by Rich Buckler for $260. 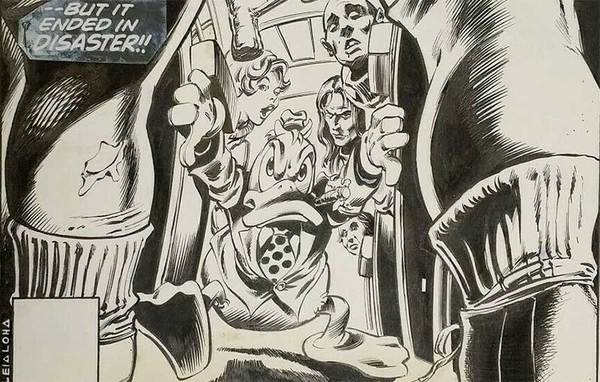 Marvel: let’s start with this classic Thor page by Jack Kirby, a Monsters on the Prowl cover by Kirby, an Howard the Duck cover by Gene Colan, a Mary Jane Watson strip by Fred Kida.

There’s no Spidey, but I like this 2099 page by Rick Leonardi, a Phoenix commission by Tony Daniel, Phoenix + White Queen by Tyler Kirkham, cheap Spidey commission by Erik Larsen, modern Avengers page by Ron Lim.

DC and Chris Samnee: last batch of 12 Inktober Batman sketches, I like this one, this, and also this one.

A page from Sandman #5 by Sam Kieth, an Invisibles cover prelim by Brian Bolland, price lowered again on this Hellboy page by Mike Mignola, a Cyberfrog page by Ethan VanSciver, Power & Glory art by Chaykin, the Crow sketch by James O’Barr. No nice comic strips, this week… 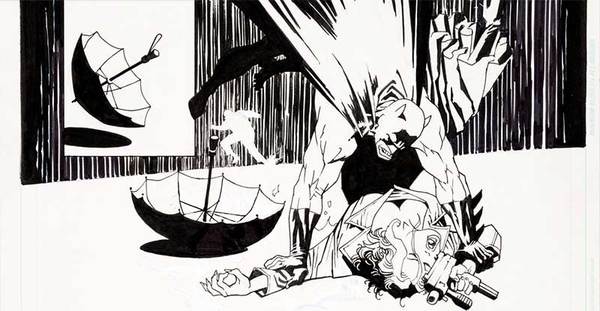 A shorter section to make way for the Signature Auction, only the best pieces.

A Spawn page by Greg Capullo, an American Flagg splash and a page by Chaykin, Tarzan by Russ Manning, a Thunder Agents prelim by Wally Wood.

The signature auction will start today (with the lots we watched last week) and continue this weekend. As usual there are multiple great pieces for most artists, I’ll choose the best one or my favourite.

A of Aparo, with a great Batman cover. A Red Sonja cover by Frank Brunner, an early Conan splash by John Buscema (go see the other pieces..) and a Namor cover by Sal Buscema. John Byrne with the original art to a 1977 Spider-Man Team-Up and a vintage Superman illustration.

A Harley/Ivy cover by Frank Cho, an X-Men page by Dave Cockrum, an incredible F4 wraparound cover by Alan Davis, Creeper by Ditko, a 1979 Superman pinup by Garcia Lopez, a Rorschach page from Watchmen.

Early Avengers art by Heck/Wood and a splash from the first Annual, beautiful Dr. Strange cover by Adam Hughes, a Wizard cover with Batman and a 4-page Wildcats spread by Jim Lee, a Joker cover by Andy Kubert, a Spidey splash by Todd McFarlane.

A historic Batman/Bane splash by Graham Nolan, 300 original art by Frank Miller is rare, here’s a Wizard cover. A Cap Marvel half splash by Jim Starlin, a Spider-Man complete issue by John Romita Jr., a Batman DPS by Alex Ross, a 1959 Peanuts Sunday.

A selection of festive Garfield strips, several Christmas and new year dailies and Sundays, here’s an early one.

It all started last year with the sale of an incredibly rare Astroboy page by Osamu Tezuka. This time there’s a selection of pages, pinups and sketches for most of the series created by Tezuka. Here’s a great one.

There are as usual 300 top quality pieces, I’ll link to a few, or this newsletter will be too long. Hergé, classic Liberatore, a Spirit cover by Eisner, many Hugo Pratt pages, Milo Manara.