Published on 15 Novembre 2019 by Comicart.tips

Here we are with #15 of Original Comic Art Tips! Another long newsletter, with many auctions and a new blog post.

The TWD back cover by Charlie Adlard and the Jay Anacleto cover both went for $800.

Heritage Sunday: I noticed that lately there’s more art in the bargain section. The big surprise is this STAT of a Daredevil splash sold for almost $4,000… I don’t know what to think, it’s not original art but at least it’s not one of those xerox copies sold on eBay.

A BPRD cover by Ryan Sook went for only $660 and that nice Huntress pinup for $150. Batman/Superman original art by George Tuska went for less than $400, Flash by Carmine Infantino for $330, a Superman splash by Paul Ryan for $150.

Cambi Aste: the only interesting result is the Little Ego 2page story by Vittorio Giardino sold for $6,500. 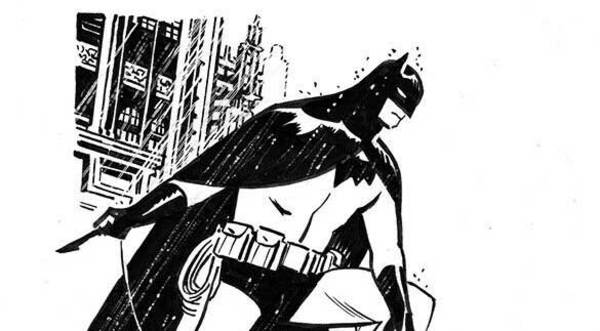 Don Perlin: a Ghost Rider splash, a page, and a Defenders page.

Two great Spidey commissions by Erik Larsen: one and two (with BG).

DC: Superman art by Gary Frank, a Superman Sunday strip by Jose Delbo, Superboy by Tom Grummett. A Robin title splash by Aparo/Sienk, a Batman page by Jim Aparo, Batman by Jock, a Batman/Deathstroke splash by Pagulayan and a rare Wonder Woman sketch by Amanda Conner.

Chris Samnee Batman illustrations: 10 new pieces, all great. I like this Batman, then this one, and this one too.

An EC horror page by Graham Ingels, an early Cerebus page by Dave Sim, a great Star Wars parody from MAD by Tom Richmond, an early Adam Hughes pinup and a cover by Jay Anacleto.

Strips: a rare Pearls Before Swine daily, an illustration by Lynn Johnston and a Wizard of ID Sunday.

A Squadron Sinister cover by Jim Cheung, an X-Men page by John Cassaday, Avengers by Alan Davis and a Cap cover by Chris Sprouse.

A to Z: A of Neal Adams, with the cover to Batman #251. Carl Barks with a rare Uncle Scrooge page and a rare cover, a Captain America cover by Sal Buscema.

A Spidey page by Steve Ditko.

I wonder if this complete 2011 comic by Ditko comes from his heirs, I’m sure they found hundreds of pages in his studio…

Thun’Da original art by Frazetta, Watchmen by Gibbons, Batman by Finger/Kane. The usual big selection of Kirby pages, like the full Fantastic Four Annual #2, here’s the splash. A Silver Surfer and an Hulk pinup would also look great on a wall.

Hey, there’s the full story by McMahon with the first Judge Dredd appearance.

A great auction of European masters, represented with multiple top pieces. All 300+ pieces are worth a look, I’ll link to the higher end art.

Hergé has a big selection, the most historic one is a Tintin page from 1939, Jaques Martin has many Alix pages like this one, It was difficult to choose between pieces by Giraud/Moebius, here are a Blueberry and an Incal page.

Juillard, Vance with XIII, an incredible Gaston by Franquin, Lucky Luke by Morris, a career spanning selection for Uderzo, and also this Asterix page.

Italians: Serpieri, Marini, a Corto Maltese Watercolour by Hugo Pratt and many Manara paintings and illustrations.

As promised I wrote a quick blog post on the Buscema Exhibition during Lucca Comics. 2 complete issues, some covers and splashes.

I took many pictures and also posted closeups of the best panels.

Go take a look, and see you next week!!