Published on 25 Ottobre 2019 by Comicart.tips

Welcome to #108 of Original Comic Art Tips! I had to wait for the Heritage website to come back online, this week… Let’s start with Auction Results.

eBay: A Wizard painted cover by Alex Ross was sold for $5k, an Iron-man cover by Bob Larkin for $5,100, an early Adam Hughes cover went for a Best Offer of $3,200. the DC Trinity illustration by Ed Benes went for $850, the Alex Toth cover prelim for $670, the Adam Hughes Stargirl pinup is for sale again with a lowered price.

Three Batman prelims by Greg Capullo went for $325, Greg sold these for $75 each. A Tony Daniel page with Bats/Supes/WW went for $250.

Heritage Sunday: you probably heard that the Heritage website was down for several days at the beginning of the week. Let’s hope our credit card information is safe. The Sunday auction was prolonged until yesterday, prices stayed low, but I have to say there was nothing worth spending big money on…

Post-2000 Garfield dailies are dropping in value after some months of constant weekly auctions, this one went for $330. Harold Knerr Sunday strips are pretty rare, this is a late strip but $500 is a great price.

Marvel: a Ms. Marvel page by Mike Wieringo, a Spidey commission by Erik Larsen, an Archangel pinup by Whilce Portacio, a nice Rogue illustration by Ed Benes, an Elektra page by Joe Madureira.

An original Invincible cover by Ryan Ottley, a nice Spawn and Angela page by Capullo/McFarlane, an early Hellblazer page by John Ridgway. Hellboy busts by Mike Mignola one and two, a Blacksad commission by Juanjo Guarnido, Crossgen covers by Claudio Castellini one and two.

An iconic Action Comics cover and a Green Lantern pinup by Ryan Sook.

No Hulk but two nice girls on this Dale Keown page, Venom by Mark Bagley and AVX by Romita Jr.

I usually don’t link to the weekly George Herriman illustrations, but this time there’s a cat and the moon… 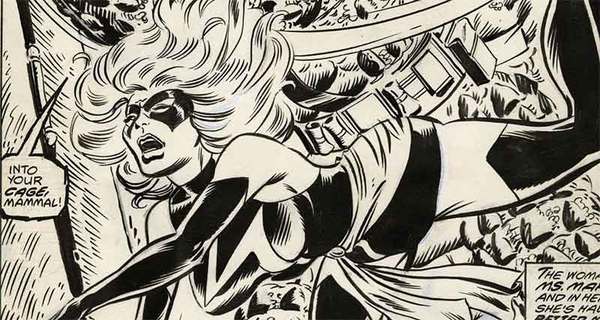 Chris Bachalo: a page from the second Death mini and a Death pinup.

Lots of pieces by Mike Deodato, like this original Spider-Man half splash.

Come back next week for part 2!