Published on 10 Ottobre 2019 by Comicart.tips

Welcome to #106 of Original Comic Art Tips! A very, very long issue, this week, my eyes are aching…

The Russ Heath page went for $1,000, a George Perez Avengers page was sold for a Best Offer of $2,700, a classic Sinister Six splash by Erik Larsen went away quickly for $5k. The X cover by Huddleston for $1,500, the Doomsday Clock page by Gary Frank is ending tonight and still affordable. The FAKE Herb trimpe drawing was sadly sold for $735.

Heritage Sunday: the guest appearance of Hitler in this Sgt. Fury page by Dick Ayers takes the price to $6,600. Buscema/Alcala Conan pages are climbing up, this last one ws sold for $2,100. Very happy for my wallet when I say that I prefer pages inked by Ernie Chan.

A Dr. Strange page by Sal Buscema for $1,800, a Betty & Veronica pinup by Harry Lucey went for $2,200, the Crumb placemat went for almost $2k, the Lady Death page by Steven Hughes and the great Tarzan daily by Bob Lubbers for $1,000.

Many great bargains this week, a Hulk splash by Mark Bagley sold for $80, an Elektra pinup by Alex Maleev for $120, a nice F4 page by Rafa Sandoval for $40, Daredevil/Punisher original art by David Lapham for $150. The usual page I thought was worth more by John Romita Jr, Spider-Man by Ron Lim for $250, a Wally Wood page for $430, Superman by Murphy Anderson for $480 and that nice Frenz/Sinnott Thor sold for $500. 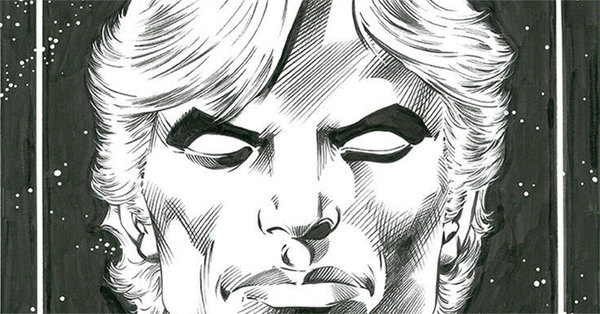 Marvel: a Joe Orlando page from Daredevil #4. Wow! Marvel 2in1 by Jim Mooney, a Spider-Man page by Ross Andru, a nice Defenders page by Don Perlin, an Avengers page by John Byrne, a Conan by John Buscema.

A Magneto cover and a I don’t know cover by Mike Huddleston, two X-Statix pages by Mike Allred, a painted Black Panther bust by Brian Stelfreeze.

We have to starti with Marvel and with this Scarlet Witch and Captain America commission by John Byrne, another Cap commission, this time by Neal Adams. This Cap sketch by Alex Ross and the signature are a bit off, what do you think? A Cap page by Dan Jurgens, a great Conan page by John Buscema, a MOKF by Gene Day.

I like this Moon Knight pinup by Bill Sienkiewicz, Spider-Man by Ron Lim, AVX by Romita Jr, Deadpool by Mark Bagley.

DC: Superman by Murphy Anderson, a full team JLA by Dick Dillin, Batman by Dick Giordano, an All Star cover prelim and a Witching Hour page by Wally Wood.

A Batman daily by Carmine Infantino, an Aquaman pinup by Nick Cardy, a Jurgens/Perez Teen Titans DPS and a Clay Mann Ivy and Catwoman splash.

So little time, so many Heritage Auctions…

1) A Charity Auction with many nice pieces, all contemporary, as they were probably donated by the artists.

A to Z. A very nice Spider-Gwen pinup by Adam Hughes on a blank cover, a Batman portrait sketch by Jim Lee, I like a lot this Cloak/Dagger/Batman pinup by Rick Leonardi and Nowlan, a Green Lantern cover by Nowlan, a Superman DPS by Howard Porter, a cover by Eric Powell, 3 nice cover prelims by Sienk, here’s Detective #1000.

2) Heritage MAD Auction. From the Collection of William Gaines, 66 pieces of MAD Original Comic Art. Coming from MAD’s publisher you can imagine there are no bad pieces to edit out. I’ll put a generic link for you to see.

3) Illustration Auction. I think this is the last time I’ll look into an illustration auction searching for pieces by comic artists… Too much time lost looking at great illustration and only a few pieces to show.

Well I don’t know where to start, This is the second generic link of the week. One of the best auctions I’ve ever seen, I’d have to show you everything, and this newsletter is already too long. All of the european masters are represented with multiple top pieces. Go!

Profiles in History has only one interesting piece, this time, an Alex Toth Batman storyboard drawing.

Septimus has many cheap sketches and one incredible piece: a 1964 Asterix illustration by Albert Uderzo. 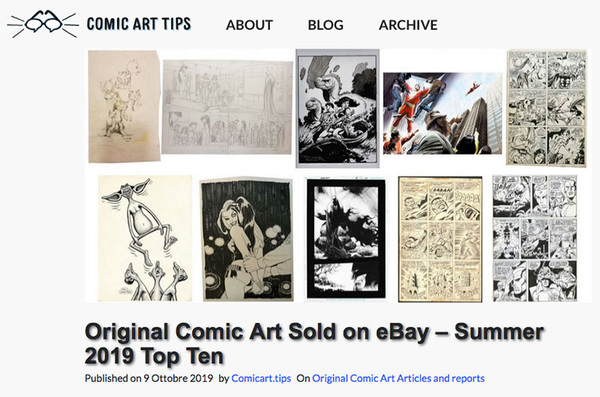 After a summer-long hiatus in eBay top ten lists, I made a recap on the www.comicart.tips website with the highest prices paid from June to September. Read it here (and let me know what you think!).

A long tour the force, I’ll see you next week..!