Published on 14 Settembre 2019 by Comicart.tips

eBay: the Joelle Jones commission spot went for $3,600, the Sojourn splash by Greg Land went for only $500, the X-Men cover by Mike Huddleston for $1,600. the Byrne commission went for $800, She-Hulk by Artgerm for $750, the Jim Cheung charity sketch cover for $1,800, a Berserker cover by Mike Mignola for the same price.

Heritage Science Fiction Auction: the Planetary splash by John Cassaday was sold for $4k, the Tim Conrad Conan for $1,3k, I wasn’t the only one who liked that Paulo Siqueira commission, it was sold for $1,6k, pretty impressive for an unpublished (?) piece.

Heritage Sunday: the Sgt. Fury page by Dick Ayers went for $4k, the Infinity War page by Ron Lim for $1,1k, good catch. A Richard Corben sketch page went for $3k, the period is good for Corb, but the art not too exciting. The Erik Larsen Spider-Man page went for $800, a good price if you don’t want to spend $5k for a better piece.

Spectacular Spidey pages by Sal Buscema are rarely offered for sale at less than $1,000. Guess we better buy them at auction: $660 and $660 for two very nice pages. Good to know.

ComiConnect: the Jack Kirby TOS cover recreation went for $24k, the Ghost Rider cover by Gil Kane for $10k, the Johnny Comet strip by Frank Frazetta for more than $7k, the X-Men cover by Chris Bachalo for $3,8k.

The Spider-Man splash by Angel Medina went for less than $500, the Hulk DPS for $370. The Batman splash by Gary Frank was sold for $1,500, based on the most recent auctions I imagined a higher price.

The Spidey/Kingpin commission by Sienkiewicz was sold for $500, the Batman one for $125. A Batgirl cover by Scott McDaniel for $380 and a Black Panther page by Sal Velluto for $71 (!).

Invincible one and two by Ryan Ottley, OZ by Skottie Young, Hellboy page and a painted Valiant cover by Mico Suayan.

Strips: a nice Corrigan daily by Al Williamson, a Wizard of ID daily and a BC Sunday.

DC: Batman original art by Greg Capullo, Batman by Nick Derington, this Batman: Europa splash by Camuncoli & Jim Lee was for sale on ebay a few months back for $5k, a Nightwing splash and a Batman page by Scott McDaniel, Batman/Green Arrow by Jim Aparo. Azrael splashes by Sergio Cariello and Vince Giarrano.

Nice Superman page by Swan/Anderson, Ma & Pa Kent find the rocket in a Superman origin page from Action #500 by Swan. And Kal-El leaves Krypton from another origin story by Swan/Ordway.

Beautiful Wonder Woman page by Jose Delbo, JLA by Tony Daniel, a Legion splash by Giffen, 2 Birds of Prey covers by Ed McGuinness and this great one by Matt Haley.

Many low priced items, not much from the big names: Franquin, Vance, Frank, Remacle, Hermann. 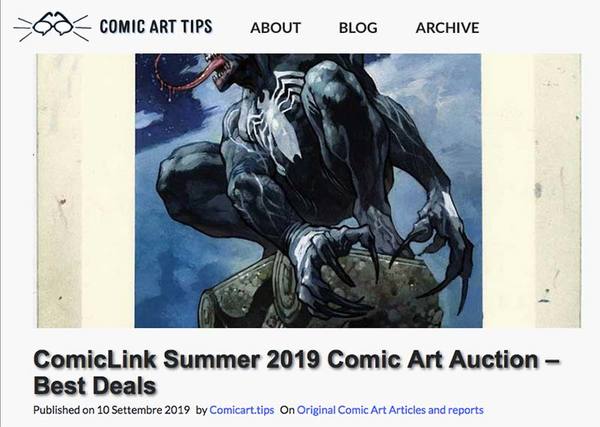 Anybody noticed that last week I only commented the high prices on the ComicLink auction? I was saving the best deals for a new blog post, after a Summer hiatus, there were many great pieces sold for low prices. Click here to read!