Published on 16 Gennaio 2019 by Comicart.tips

Welcome to #68 of Original Comic Art Tips! lots of great original art to see this week. We’ll start, as usual, with some auction results.

The Frazetta sketch went for $3,600, a nice Longsam Sunday for only $300, the Robin Malone made less. 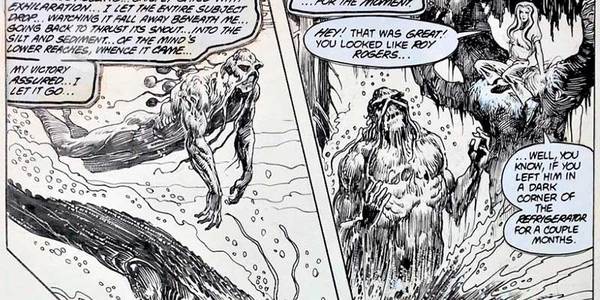 Very good week on eBay for Original Comic Art! Some high quality pieces and many nice pages with low prices. By the way, seems like I “discovered” a technique to find new Buy It Now listings. Good deals only last a few hours, and they’re difficult to track if you’re not online reloading the page… (and I’m not) we’ll see if it works.

Marvel: A Spiderman/Dr. Doom 2/3 splash by Erik Larsen from Amazing #350. It started from $0,00, I’m curious to see the end price. Very nice splashy X-Men page by Andy Kubert, there’s also another less interesting splash. The Springer/Romita title splash from Web of Spiderman #52, another title splash, Warlock written by starling and drawn by Ron Lim, a Man-Thing action page by Don Perlin, then look at what Pablo Marcos is still able to do at 81 in this cover quality Conan illustration done in 2018.

Nice Prophet page by Stephen Platt and a cheaper one from Soul Saga, Invincible full figure commission by Ryan Ottley, a Walking Dead page by Charlie Adlard with most of the cast, a Garcia-Lopez Tarzan splash and a Promethea DPS by J.H. Williams.

DC: only one Batman page by Jim Aparo, one by Gene Colan, an Hawkman Ad by Curt Swan and Clark changing into Superman, nice one. Two 1944 Superman dailies by Wayne Boring (one, two), three Titans pages by George Perez, Impulse by Ethan VanSciver and mad Joker page by Pat Gleason.

Not much from Marvel, a Blaze cover by Wagner/Sienkiewicz, a Silver Surfer page by Tom Grindberg and a Doc Strange commission by Chris Bachalo.

Many nice strips this week, we can only start with this Prince Valiant illustration by Hal Foster, a Dan Barry 1968 Flash Gordon Sunday, a Rip Kirby daily by Alex Raymond, a really great Dick Tracy Sunday, a Jack Davis cartoon from the 50’s, color Dennis illustration by Ketcham and a cartoon by George Herriman. 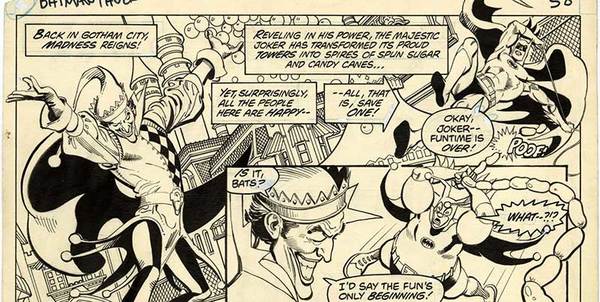 This is part two (see last week’s issue for part one) of our ComicLink January auction overview. The second half is slightly better than the first…

A Thor page from the 70’s by Walt Simonson, nice Captain America page by Mike Zeck, Don Perlin Punisher splash, a Thing splash by Whilce Portacio, Iron-Man splash by Mark Texeira, Cap by Tim Sale, some recent Romita Jr. original art, like this Avengers page and Hulk Vs. The Thing.

Not many interesting pieces, some sketched books by top artists you can try to win for low prices, like this nice Moebius.