Published on 18 Giugno 2021 by Comicart.tips

Welcome to #194 of Original Comic Art Tips! Another long update with many auctions.

eBay: we start with a mad price, $23k for a Micronauts cover by Bob Layton. Then a Hulk page by Herb Trimpe was sold for $5k, a Cavewoman splash by Budd Root for $3k, a Fantastic Four page by John Buscema for $3,3k, the Silver Surfer splash by Tom Grindberg for $2,5k, a Grimjack cover by Tim Truman for $2,1k, a Scout cover for $1,8k.

A Preacher page went for $2k, a Batman commission by Gary Frank for $2k, a Harley sketch by Bruce Timm for $1,2k, the Hate cover by Peter Bagge for $1,7k.

I can’t tell you Best Offer prices anymore (and I’m not happy), so I’ll group them all here: a painting by Bernie Wrightson went for less than $3k, a painted cover by Jusko for $2,5k, a Namor page by Don Heck for $2k, a nice Dracula page by Gene Colan for $1,5k.

Heritage Weekly Auction: incredible record price for Paul Smith X-Men original art, $26k for this page. Consider that the HA record was made in 2016 by a cover sold for $27k.

The X-Men page by John Romita Jr went for $7,5k, impressive for a quiet page. The 33 sketch lot went for $6,6k, not much if you consider the Snoopy sketch and two 100% real (and therefore very rare) Bob Kane sketches.

Catawiki: many high results. The Druuna page by Serpieri went for €4k, a page by Pratt for €2,8k, a Corto Maltese strip for €1,7k, the Gesebel cover by Corteggi for €2k, the illustration by Toppi for €1,8k, the page from S. by Gipi for €1k, the Ranxerox pinup by Liberatore for €1k, the Kingpin page by Dell’Otto for €750 and a Mickey Mouse page by Cavazzano for €700.

A Natacha cover by Walthery went for €6k and a sketch by Quino for €900.

Daniel Maghen: many very high prices, all of the pieces by Gibrat went for more than €20k, with a cover sold for €130k, a panel page for almost €100k, and many others sold for more than $50k.

Of the many Jazz Maynard pieces by Roger, the highest price was paid for this cover sold for €12k.

Another change for eBay. They’re not showing anymore the sections “from the same seller” and “people are watching”, so there’s less possibility of finding overlooked auctions. The problem is also for sellers since they’re only showing sponsored auctions, now.

Marvel: do you like Namor? Because we have pages by Bill Everett (one, two), Ross Andru, John Byrne and Geof Isherwood.

The Sub-Mariner is in this Fantastic Four page by John Buscema, by JB there’s also a Conan page, and a nice prelim.

An Avengers page by Don Heck, sadly ruined by somebody playing with markers, Silver Surfer and Galactus by Ron Lim, Captain America by Jae Lee and a great Thor cover by Alan Davis.

DC: a Superman page by John Byrne and one by Curt Swan. The Jim Lee Batman bust is on sale again, I don’t know why nobody is buying it.

An Invincible page by Ryan Ottley.

I always have a hard time finding press releases on Heritage’s website, this time I stopped searching after 10 minutes. It seems that the Original Art Auction was moved to Wednesday, and the Sunday/Monday auction will only offer comic books.

A Silver Surfer page by Ron Lim, a full-figure Wolverine by Brian Bolland, a Nightcrawler commission by Dave Cockrum, Spider-Man by Ed Hannigan.

A Superman page by Jim Starlin, a rare Superman commission by Curt Swan, a Shadow page by Kyle Baker.

A Fafhrd page by Mike Mignola and some strips: a funny Beetle Bailey, Green Berets by Joe Kubert, a Juliet Jones daily, a funny Tall Tales Sunday by Jaffee. 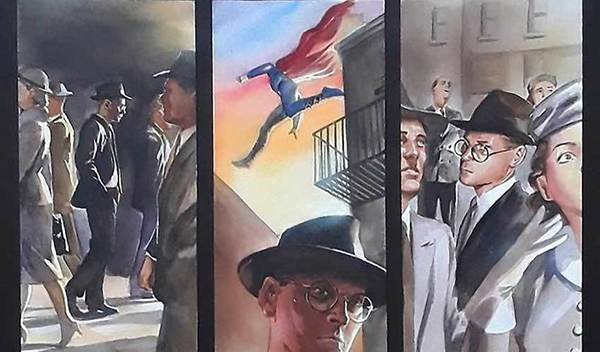 An illustration by Crepax, Necron by Magnus, a Disney page by Romano Scarpa, a Nathan Never cover prelim by Castellini, a Spider-Man sketch by Giuseppe Camuncoli, a Vampirella sketch by Gabriele Dell’Otto.

A Marvels page by Alex Ross, an Avengers page by Mike Deodato, a nice page by Aouamri, one by Crisse.

A few comics-related pieces hidden in this auction. What is a 1951 TOP Peanuts daily doing in here? There’s also a Schroeder sketch.

Two 1994 Marvel Masterpieces card paintings by the Hildebrandt Bros, Wolverine and Spider-Man. There’s also a Space Ghost animation drawing attributed to Alex Toth, not so sure about it.

Then Tardi, Boucq, Le Gall, Manara, Martin and many more.