Published on 1 Luglio 2022 by Comicart.tips

Welcome to #248 of Original Comic Art Tips! Many auctions and many nice pieces, this week. Also the first image I censored in five years (mostly cause I fear the email bots sending this in the spam), hope you like the button I designed..! 😎

eBay: a Batman convention commission by Tim Sale was sold for an incredible $8k. A very detailed and very cool Captain America/Deathlok cover sketch by Mike Zeck was sold for a $2,3k Best Offer, Conan/Red Sonja pages by John Buscema usually go for more than $2,5k.

Not the best Fantastic Four page by Byrne, but good enough for only $500.

Heritage Weekly Auction: ok, this was Jonah Hex first appearance, so it went for $36k. But it was just the cover sketch by Tony De Zuniga…

The Legion page by Dave Cockrum was sold for $14k, the Byrne/Romita Spidey for $13k, a Terry daily by Caniff for $10k, a Death of Superman page (without Superman, Doomsday or death) by Butch Guice went for $8k, the Fly by Ditko for $8k.

She-Hulk by Byrne for $5,5k, the Gen13 page by Campbell for $4k, the SPlatt SPlash page for $3,8k, a Captain America page by Andy Kubert for a pretty high $2,5k, Mary Perkins was sexy enough in this daily to sell for $1,5k, great art on this Terry Sunday, sold for an affordable $4k.

Catawiki: €3,3k for the illustration by Manara, €2k for the pinup by Liberatore, €1,4k for the Blacksad commission by Guarnido, €1,2k for the cover sketch by Gimenez, the Alan Ford cover by Piffarerio went for €800, a Batman page by Alcatena for €800, a Burlesque pinup by Marini for €750.

Prop Store: $80k for the unpublished Joker cover prelim by Brian Bolland, $6,5k for a Joker trading card by Norm Breyfogle, $5,5k for the book cover by John Romita, $5k for a Magneto page by Cockrum, Batman cover sketches by Ed Hannigan were sold for $2k, a Hulk page by Mike Zeck for $900.

Marvel: a 1967 X-Men page by Don Heck, a Power Man page by George Perez, Man-Thing by Mooney, White Tiger by Giffen, a District X cover by Tom Raney, a Nick Fury sketch by Steranko. The Excalibur page by Erik Larsen is still going.

DC: a Green Arrow/Harley cover by Tim Sale, some very nice Batman pages by Scott Hampton, here’s a half splash and the best page, a Batman sketch by Chris Samnee.

A Galileus page by Sergio Toppi, a Barbarella cover by Celina, a painted Judge Dredd page, a inked Hellboy bust by Mignola, this seller has many sketches by David Mack, a sketch by Vaughn Bodé. 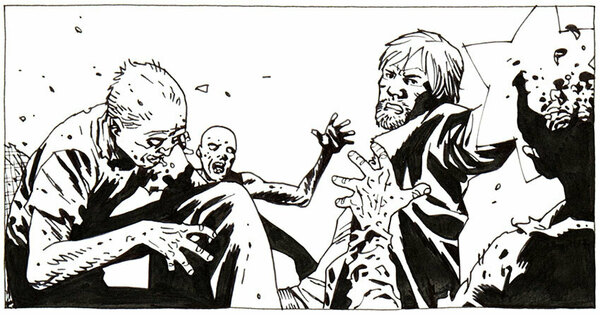 Top auction, this week, I had to leave a lot of things out.

Marvel: Avengers by John Buscema, Dracula and Howard by Colan, Red Sonja by Thorne, look at this X-Men cover by Doug Braithwaite, a Hulk/Wolvie splash by Ed McGuinness.

Rick and Michonne Vs. Zombies. very rare. buy it. The Fly by Ditko, a Cerebus page, 1949 pages by Dan Barry and Alex Toth, great Western page by Severin/Elder, Creepy by Severin, look at this Bill Draut page.

Strips: a 1950 Prince Valiant page by Hal Foster, Terry by Caniff, very nice Wash Tubbs by Crane, a Pogo Sunday. An Archie daily by Montana is already at $1k, do you have idea why? Reply, thanks!

A Necron splash by Magnus, Ken Parker by Milazzo.

A page by Franck Biancarelli, a painted page by Durand, a Marsupilami pinup by Batem.

A to Z we have a Galactus DPS by Mark Bagley, a Punisher cover by Tim Bradstreet, a Conan page by Buscema, a Phoenix cover by J. Scott Campbell, a 1992 Hulk page by Travis Charest, a Galactus splash by Alan Davis, a Star Wars page by Michael Golden.

Some Y pages by Pia Guerra, early Ant-Man by Don Heck, Daredevil by Infantino, a cover by Daniel Warren Johnson.

Kirby animation art: I like Space Samurai and the Toxic Giant.

Not much to see. many Crepax illustrations, I like this Motorsports one. Already offered a few times, this Pazienza page, a nice Sgt. Kirk page by Pratt, a Jacovitti page.

A color drawing of Lucky Luke by Morris, a painting by Druiilet, then nice pages by Alex Alice, Cassegrain, Hulet, Lafebre, Nesme.

Most of the pages are by Arroyo, here’s a cover project.