Published on 28 Febbraio 2020 by Comicart.tips

Welcome to #126 of Original Comic Art Tips, I’ll be very quick with results to leave space to many new things….

Heritage Weekly: 32 pieces went for well over $1,000, this week, so I’ll put here a generic link to the highest prices.

Marvel: after a Liefeld month we have a Buscema week. Be quick with these two low buy it now pieces, a Conan page drawn and signed by John and a nice Fantastic Four page. A Silver Surfer sketch by John+Sal, a Namor page by John.

DC: a Superman splash by Jim Lee, a vintage Superman pinup by Butch Guice, Rorschach by Gary Frank, Batman by Dick Dillin, a Batman cover by Pasqual Ferry, Wonder Woman by Tom Derenick and Matteo Scalera, the Demon by Byrne.

Ninja Turtles original art by Eastman and Laird, a Nexus commission by Steve Rude, a Shadow sketch by Bill Sienkiewicz.

A Tumbleweeds Sunday and a Wizard of ID Sunday.

Ok, you’re probably tired of this, but it’s getting funnier everyday: 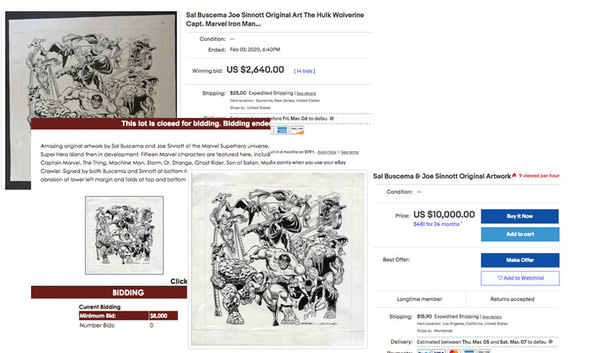 DC: a Superman daily by Wayne Boring, a Batman page by Frank Quitely, a Batman prelim by Alex Ross.

The Phantom by Pat Boyette and Jim Aparo, Love & Rockets original art by Jaime, a Winterworld page by Zaffino.

Strips: a Rusty Riley Sunday, a Pogo illustration, a cartoon by Pat Oliphant, a very nice Cisco Kid daily by Salinas, a funny Garfield daily and a Hi and Lois daily by Dik Browne. 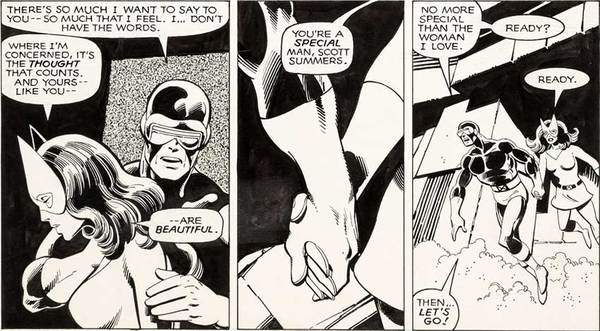 We looked at covers and comic strips, now it’s time for all the other pieces.

Let’s start with the best of the best: some Spidey pages by Steve Ditko, here’s one. one by John Romita Sr., a classic Hulk pinup by Jack Kirby and a Fantastic Four original, look at this X-Men page by John Byrne, then at the perfect X-Men page by Jim Lee.

A Spidey vs. Superman splash by Ross Andru, the Avengers by Neal Adams, a Spider-Man page by Erik Larsen, a complete Spidey issue by John Romita Jr., The Hulk by Todd McFarlane.

A complete Batman issue by Jim Aparo, an X-Men page by Andy Kubert, a Joker semi splash by Lee Bermejo.

Very good original art in this auction, I’ll start with artists represented by multiple great pieces, I’ll choose one but you should go and see them all. An X-Men cover by Art Adams, an original Ultimate Spider-Man cover by Mark Bagley, Silver Surfer by John Buscema, a Defenders splash by Sal Buscema.

Many Batman pages by David Finch, like this Joker splash, an original Zatanna cover by Adam Hughes, a 1994 Superman cover and several splashes by Dan Jurgens, an early Fantastic Four page by Jack Kirby, a beautiful Batman pinup by Jae Lee, a Superman DPS by Jim Lee and a Thing/Iron-Man page by Jim Starlin.

Then some exceptional pieces: a Battle Chasers page by Joe Madureira, an original Amazing Spider-Man cover by Frank Miller, a Black Orchid cover by Dave McKean, a Judge Dredd cover by Brian Bolland, a great Preacher page, a Joker half splash by Lee Bermejo.

A 1992 Death illustration by Chris Bachalo, a Wolverine cover and a Fantastic Four page by John Byrne, a Batman page by Sean Murphy, a Wolverine splash by Adam Kubert, a Darkness cover by Brandon Peterson, a Charlton cover by Steve Ditko, a Spawn splash by Capullo/McFarlane, an original Black Cat cover by J. Scott Campbell.

A 1992 Spidey cover by John Romita Sr., a complete Spidey issue by John Romita Jr., a Batman illustration by Tim Sale and a beautiful Spidey/Ghost Rider page by Mark Texeira and a Captain America half splash by Mike Zeck.

A 1916 Buster Brown Sunday by Outcault and and a page by Harvey Kurtzman as a bonus.